People, not profit was a rallying cry. Above a mattress in the middle of an intersection and in the background yarn was strung in spider webs to prevent access to the meetings. Photo: Langelle/GJEP 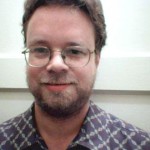 Soren Ambrose was one of the lead organizers of the April 2000 protests against the IMF and World Bank which brought upwards of 20,000 to Washington, DC. He comes from Chicago, and has degrees from New York University and the University of Chicago. He has been an activist for global economic justice since 1994.  His analyses of the international financial institutions (IFIs) and the global economy have been published and quoted extensively in U.S. and international media, and he was profiled in the Financial Times – unfortunately on Sept. 11, 2001. Soren’s interest in economic justice developed during his graduate studies on Nigerian literature and politics at the University of Chicago. He joined the Chicago chapter of the 50 Years Is Enough campaign, a coalition established for the 50th anniversary of the IMF and World Bank, shortly after its founding in 1994, and moved to Washington in 1995 to work with it. During his time in Washington, he also worked with the Institute for Policy Studies, Nicaragua Network, and the Alliance for Global Justice, which he co-founded. He left the US in 2005 to move to Kenya, where he co-founded Solidarity Africa Network and Daughters of Mumbi Global Resource Center with his partner, Njoki Njehu.  In 2007 he became Africa Program Coordinator at the Bank Information Center (BIC), a watchdog on the international financial institutions. He joined ActionAid International in 2009 to work on development finance, and is now its International Head of Policy, Advocacy, and Research, based in Nairobi. In his various roles, Soren has visited over 60 countries and seen many kinds of systemic problems – plus a few successes.