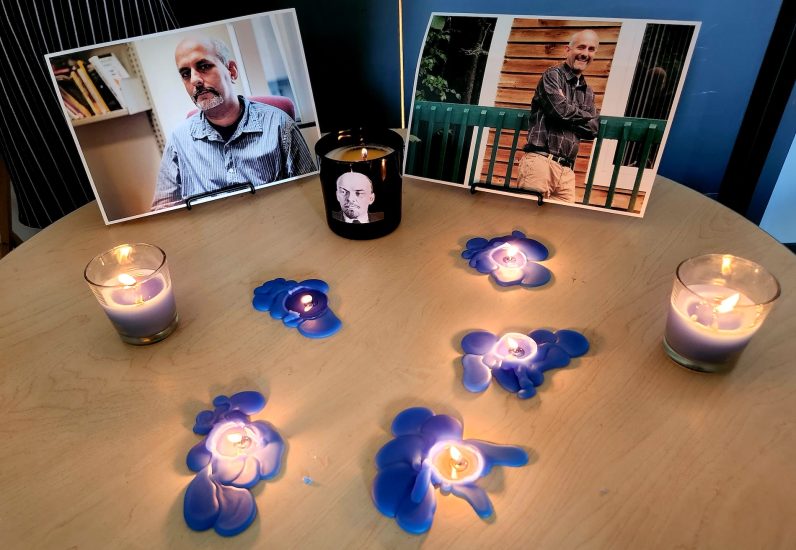 GJEP co-founders Anne Petermann and Orin Langelle traveled to Montreal, Quebec on 11 June for the memorial services for GJEP Founding Board Member Aziz Choudry, who passed away unexpectedly last year in Johannesburg, South Africa. Aziz was previously a professor at McGill University in Montreal and had a large community of friends there. Petermann and Langelle met Aziz in 2000 in New Zealand at an international meeting of Native Forest Network. Aziz was a pioneer of the anti-globalization movement in the Pacific region, mobilizing extensively against the trade deals of the Asia Pacific Economic Cooperative (APEC). He was a globally respected activist and scholar. Langelle collaborated with Aziz on his book Learning Activism, providing all of the photos for it, and was working on a new book project with Aziz when he passed away. Photo: Langelle/GJEP. 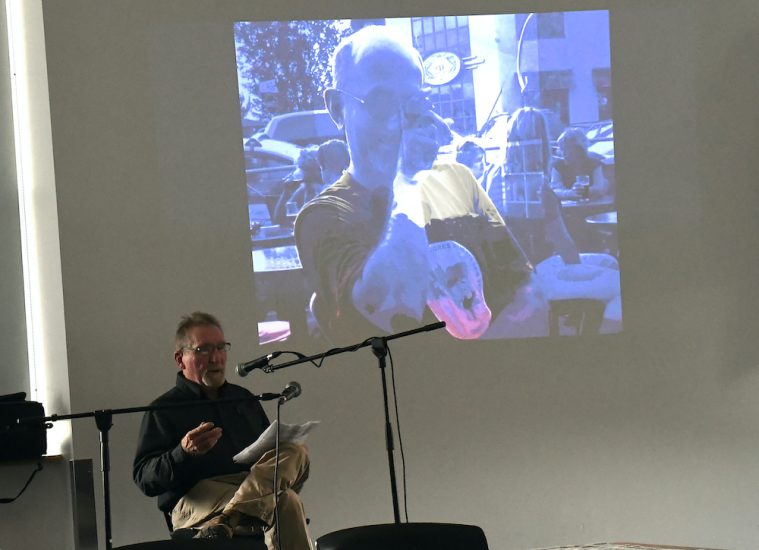 March for our Lives Buffalo

GJEP friend and ally, Bill Jungels posted this photo essay from the march in Buffalo at the site of the massacre of ten victims by a white supremacist in a Tops supermarket. The march was timed to coincide with the march in D.C. to demand that Congress enact gun controls. GJEP is headquartered in Buffalo, NY, with our main office there until 2020, and another office in Auburn, NY, home to one of the victims.

GJEP’s Orin Langelle and Steve Taylor attended the 30th gathering of the midwest forest protection organization Heartwood over Memorial Day weekend. Both also attended the original founding of Heartwood in 1990. 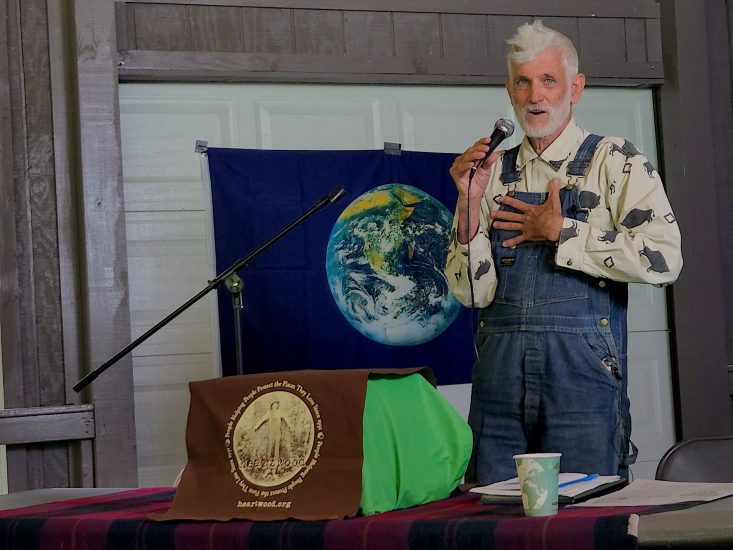 Adriana Daroqui, a graduate student at The New School, completed her capstone project with GJEP in 2021 with a detailed report on the social and ecological impacts of lithium mining in Chile. In May, Truthout posted this article she authored, based on the report, discussing green policies that promote “renewable energy” technologies, such as solar panels, wind turbines and electric batteries that threaten to do even more harm to ecosystems in extraction areas by destroying biodiversity, contaminating water, and causing social and environmental damage to local Indigenous communities.

Global Justice Ecology Project’s Breaking Green podcast talks with activists and experts to examine the intertwined issues of social, ecological and economic injustice. Breaking Green also explores some of the more outrageous proposals to address climate and environmental crises that are falsely being sold as green. 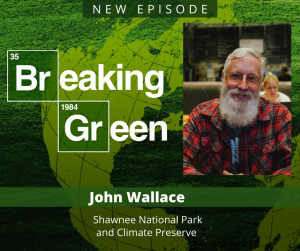 In this new episode of Breaking Green, we speak with John Wallace, founding member of Shawnee Forest Defense and long time activist involved in protecting the Shawnee National Forest in southern Illinois.

Along with Shawnee Forest Defense, Wallace is working to transfer the Shawnee National Forest out of the Department of Agriculture and into the Department of Interior to create a new Shawnee National Park and Climate Preserve. Wallace argues that this new designation will benefit wildlife, recreation, our rapidly changing climate and stimulate much needed economic development.

As a forest activist on the Shawnee National Forest and public land in and around the southern Illinois region for over 30 years, Wallace has taken on public awareness campaigns, tackled pro se litigation and participated in non-violent direct action in defense of the natural world.

Subscribe to Breaking Green wherever you get your podcasts.

Please support Breaking Green and independent journalism with a donation.

GJEP coordinates the Campaign to STOP GE Trees, a national and international alliance of organizations, scientists, Indigenous Peoples and other individuals that have united towards prohibiting the ecologically and socially devastating release of genetically engineered [GE or genetically modified] trees into the environment.

A new glyphosate-resistant GE eucalyptus tree, developed by Suzano Papel e Celulose, was approved in Brazil without broad public consultation. Groups in Brazil responded with an open letter signed by dozens of Brazilian organizations and endorsed by groups from organizations globally. These groups are looking into avenues to challenge the approval of the tree in Brazil. Earlier in June, GJEP put out a press release about the open letter, which continues to get response from reporters.

When GJEP identifies a group or organization whose non-for-profit work closely aligns with our mission, we may support their important work by becoming a fiscal sponsor. This helps them minimize bureaucracy so they can focus on their crucial work for ecological and social justice, forest protection and/or human rights. GJEP fiscally sponsors BiofuelWatch, Vermont Street Medics, Save the Pine Barrens, NH PANTHER, Center for Grassroots Organizing, Standing Trees VT and Shawnee Forest Defense.

To learn more go to www.biofuelwatch.org.uk. 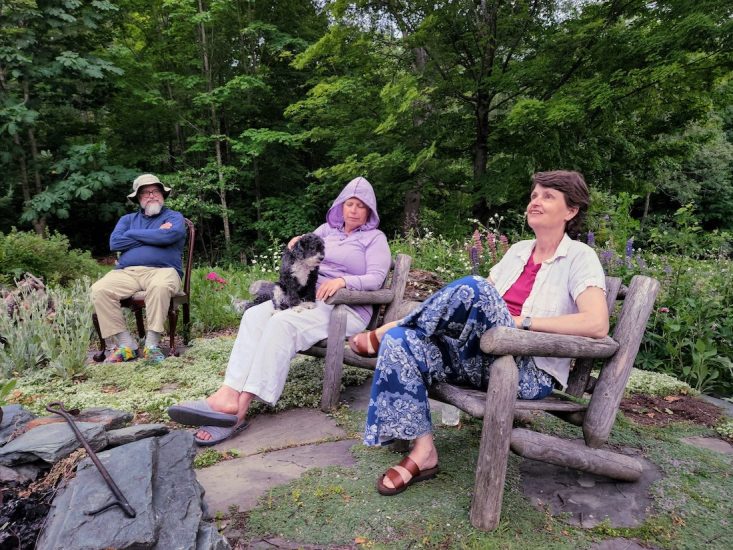 Anne Petermann and Orin Langelle spent a week in Vermont meeting with old friends and colleagues about ongoing collaborations.  Orin met with several people about a potential photography book project based on his Portraits of Struggle exhibit.  The two also met with GJEP’s fiscally sponsored projects that are based in Vermont, including Biofuelwatch and the Center for Grassroots Organizing. Cisco (left), Biofuelwatch co-director Rachel Smolker (center) and GJEP’s Anne Petermann (right). Photo: Langelle/GJEP.