In July of this year Global Justice Ecology Project, the Campaign to stop GE Trees and a handful of other organizations, were successful in collecting signatures and comments from over a quarter of a million individuals and over five hundred organizations globally, opposing the USDA’s proposed approval of genetically engineered (GE) eucalyptus tree plantations throughout the US Southeast. After devastating wildfires in Chile and Portugal this year due to Climate Change and eucalyptus plantations, the global community had begun to wise up to the fact that monoculture tree plantations are a serious threat to communities and ecosystems around the world.

Monoculture eucalyptus and pine plantations already exist in the Southeast US, but the genetic engineering of freeze tolerant strains of the eucalyptus trees would vastly expand the size, number, and location of these plantations–as well as introducing a wealth of new and unpredictable impacts on communities, biodiverse ecosystems and wildlife.

The proposed locations for proposed GE tree plantations can be seen below. 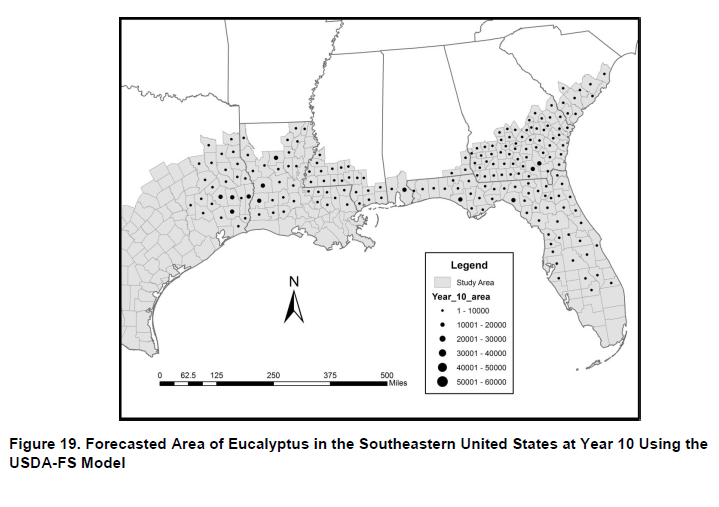 These plantations, much like any other environmentally hazardous operation, will be located mostly in and around disenfranchised and/or forest dwelling communities. They will be left to deal with the droughts, poisonous water runoff, biodiversity loss, and overall human rights violations that are so prevalent among monoculture tree plantations as a whole. Not to mention the fact that eucalyptus trees are highly flammable (as we have seen), and with increasingly hot and dry weather in the proposed areas of development, this is a dangerous recipe for disaster. In fact, states like California and Hawaii, who have already experienced devastating fires due to invasive eucalyptus trees, have already put into motion tactics to cull the trees yearly to reduce wildfire risk.

As we have seen with this recent hurricane season, and many natural disasters before that, as well as industry mishaps such as pipeline malfunctions, oil spills, and the improper disposal and/or intentional release of toxins, the people who are impacted the most negatively by environmental hazards are the poor and disenfranchised. They are the ones that deal with the brunt of the pollution, destruction, and silencing by big corporations. Brownfield cleanup sites are notoriously in some of the poorest neighborhoods in the country, and lawsuits for air and water pollution in these same communities can go on for years with no retribution for the affected parties.

Monoculture tree plantations are bad for the environment, and they are bad for people. The only ones benefiting from them are the large companies making profit from wood products and biofuels (a false solution to climate change). The industry makes false claims about the benefits of monoculture plantations, but the truth is that these trees do not reduce carbon, they take up land from native forests and agricultural land, they dry up and pollute the surrounding areas, they cause severe wildfires, and so much more.

Letting the USDA know how the public feels about possible GE tree plantations was a huge victory, but there is much continued work to shed light on the evils of existing non-GE tree plantations and the exacerbation of those evils by incorporating GE trees into the mix. Global Justice Ecology Project, the Campaign to Stop GE Trees, and our partners will continue our ongoing fight to keep GE tree plantations out of communities globally and right here in the United States. And we will continue to provide a voice for those communities most affected by the serious issues that come hand in hand with monoculture plantations.