WASHINGTON— The annual overwintering count of monarch butterflies released last week confirms butterfly numbers fell by nearly one-third from last year’s count, indicating an ongoing risk of extinction for America’s most well-known butterfly. Scientists report that this year’s population is down by 27 percent from last year’s count, and down by more than 80 percent from the mid-1990s. This year’s drastic decline is attributed in part to more extreme winter storms that killed millions of monarchs last March in Mexico’s mountain forests, where 99 percent of the world’s monarchs migrate for the winter.

“The monarch butterfly is still in really big trouble and still needs really big help if we’re going to save this beloved orange-and-black wonder for future generations,” said Tierra Curry, a senior scientist at the Center for Biological Diversity. 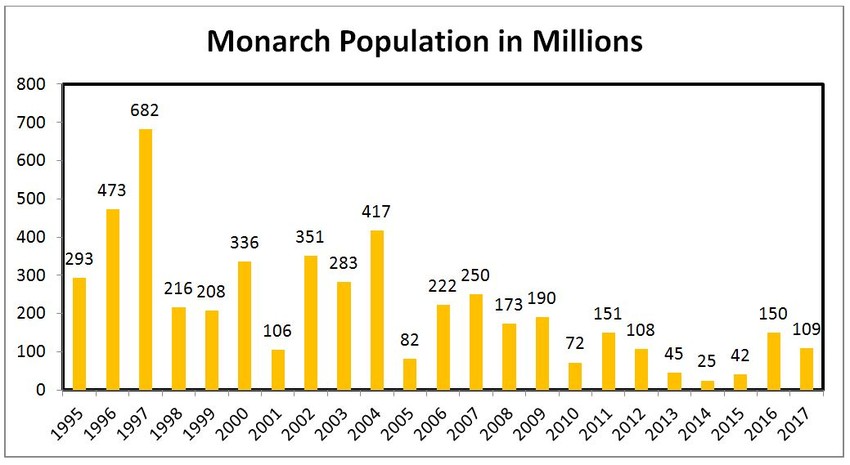 A recent study by the U.S. Geological Survey concluded that there is a substantial probability that monarch butterflies east of the Rockies could decline to such low levels that they face extinction. Researchers estimate the probability that the monarch migration could collapse within the next 20 years is between 11 percent and 57 percent.

“In addition to threats from more frequent and harsher weather events, monarchs are still severely jeopardized by the ever-increasing pesticides used with genetically-engineered crops, destroying their habitat,” said George Kimbrell, senior attorney at the Center for Food Safety. “We will continue to do everything we can to ensure monarchs have a future.”

The butterfly’s dramatic decline has been driven in large part by the widespread planting of genetically engineered crops. The vast majority of U.S. corn and soybeans are genetically engineered for resistance to Monsanto’s Roundup herbicide, a potent killer of milkweed, the monarch caterpillar’s only food. The dramatic surge in the use of Roundup and other herbicides with the same active ingredient (glyphosate) on Roundup Ready crops has virtually wiped out milkweed plants in the Midwest’s corn and soybean fields.

In the past 20 years, scientists estimate, these once-common, iconic orange-and-black butterflies may have lost more than 165 million acres of habitat — an area about the size of Texas — including nearly a third of their summer breeding grounds. Logging on the monarch’s Mexican wintering grounds is also an ongoing concern. Scientists have also identified threats to the monarch during the fall migration including lack of nectaring habitat and insecticides.

Background
Found throughout the United States during summer months, most monarchs from east of the Rockies winter in the mountains of central Mexico, where they form tight clusters on trees. Scientists from World Wildlife Fund Mexico estimate the population size by counting the number of hectares of trees covered by monarchs. Monarchs need a very large population size to be resilient to threats from severe weather events, pesticides, climate change, disease and predation. A single winter storm in 2002 killed an estimated 500 million monarchs, roughly five times the size of the current population.

Concerns over the extinction risk of the monarch led the Center for Biological Diversity, the Center for Food Safety, the Xerces Society and renowned monarch scientist Dr. Lincoln Brower to petition the U.S. Fish and Wildlife Service in 2014 to protect the butterfly as threatened under the Endangered Species Act. The Service is now conducting a review of its status and must decide on protection by 2019. In Canada, the Committee on the Status of Endangered Wildlife has recommended that the Canadian government list the monarch as an endangered species. Monarch butterfly migration is now recognized as a “threatened process” by the International Union for the Conservation of Nature.