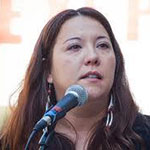 Kandi (Mandan, Hidatsa, and Arikara) was born in North Dakota and grew up in an area known today as the Fort Berthold Reservation. She obtained her undergraduate degree from the University of North Dakota (UND) in Natural Resource and Park Management. After working in the Park Service for 3 years, she went on to earn a Masters of Environmental Management Degree from UND’s Earth Systems Science and Policy Program.

She began working for the Indigenous Environmental Network as the Tribal Campus Climate Challenge (TCCC) Organizer in February of 2007. Since then, over 30 tribal colleges have been engaged in the TCCC and many have worked on projects ranging from light bulb swaps and community tree plantings to small-scale community solar panel installations and community gardens. The main goals have been to introduce and support initiatives within tribal colleges for students to pursue renewable energy alternatives such as solar and wind power; reduce their carbon footprint and global warming pollution; connect students to environmental justice and climate justice issues in their communities; promote collaboration between students and communities; and to do so in line with Indigenous traditional knowledge and belief systems.

Her work has expanded over the years to include work in the international arena in order to create more awareness about international decision-making and its effect at the local level. She took part in the United Nations Framework Convention on Climate Change (UNFCCC) in Copenhagen during December of 2009 to speak out against tar sands development and demand that the U.S. sign on to the United Nations Declaration on the Rights of Indigenous Peoples. She also attended the World Peoples Conference on Climate Change and the Rights of Mother Earth in Cochabamba, Bolivia, helping to put forth The People’s Agreement. She attended the UNFCCC in Cancun, Mexico at the end of 2010 where she spoke out against the commodification of the sacred through such carbon trading schemes as REDD.

Kandi continues to work primarily at the grassroots level bridging generational gaps in tribal communities while connecting the local to the national and the national to the international in an effort to raise awareness about sustainability and continue the fight towards just climate and energy solutions for all.