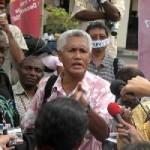 Fiu Mata’ese Elisara-La’ulu joined OLSSI as its Executive Director in February 2002. He came to the organization after spending over eight years (1993 – 2001) with the United Nations Development Programme (UNDP) in Samoa, six and a half of those years as Assistant Resident Representative (1996 – 2001). Fiu was given overall responsibilities for the Global Environment Facility (GEF) and environmental programs throughout much of his eight years with UNDP Samoa, and was closely involved with the South Pacific Regional Environment Programme (SPREP) and other environmental partners, including OLSSI, in the implementation of environment programs around Samoa and the Pacific Island countries.

Before joinning UNDP, Fiu was Director of the Department of Lands, Surveys and Environment in the Government of Samoa. In that capacity, he was one of the official government representatives who followed the global process during the climate change and biodiversity conventions throughout the early 1990s. He also participated in the UNCED global conference held in Rio de Janeiro, Brazil as a government official in 1992, as well as in the 1994 Barbados Small Islands States (SIDS) conference as a UNDP official.

As an Indigenous Samoan and a Pacific Islander, Fiu has represented Indigenous Peoples in many global conferences since the UNCED in 1992 in Rio de Janeiro, Brazil, and has been trying ever since to translate his many years of knowledge and understanding emanating from UNCED into tangible community outcomes and to ensure the sustainable use of natural resources in Samoa and the Pacific region. In particular, Fiu has been actively involved in advocating to protect the rights of Indigenous Peoples and to influence national development policies on indigenous peoples issues, sustainable development and environmental concerns in all sectors of the Samoan and Pacific societies.

Fiu Mataese Elisara was the first Samoan who graduated from the School of Surveying at the Otago University, New Zealand, in 1974, and topped the New Zealands Institute of Surveyors Professional examinations in 1977, receiving the Maurice Crompton Award from the New Zealands Institute of Surveyors which he is a professional member (MNZIS). Fiu also gained his town and land planning training in the Griffith University in Brisbane Australia in 1978.

Fiu is passionate about indigenous peoples issues, sustainable development and environmental concerns, and has taken up this post of Executive Director of OLSSI with the commitment to be more closely involved with communities in the protection of their rights, the wise and sustainable use of their natural resources, and the conservation of environment.

He is currently a strong advocate on climate change issues in Samoa, the Pacific, and around the world, having presented at a number of regional and global forums on the impacts of climate change in Pacific Island countries. He wrote the Pacific climate change statement presented in the UNPFII global conference held in New York in May 2008, as well as case studies in this area from Samoa and the Pacific.

Finally, Fui actively defends the existing customary land tenure system of Samoa and campaigns to protect its ownership as an inherent right of Indigenous Samoans and inalienable invaluable asset for the peoples of Samoa and local communities of the Pacific. This will help ensure the sustenance of their customs, their traditional norms, as origin of their languages, pivotal in their spiritual connection, primary source of their livelihood, and the foundation of their cultural existence which is being driven to change by foreign interests such as the Asian Development Bank and the World Bank. The challenge for Fiu is to enlighten the Samoans about the fact that our own Pacific governments are being co-opted by these economic powers that push them to accept these investment conditions at the expense of the communities and citizens of the Pacific.