May Day: A Look Back at 1971 Vietnam War Protests 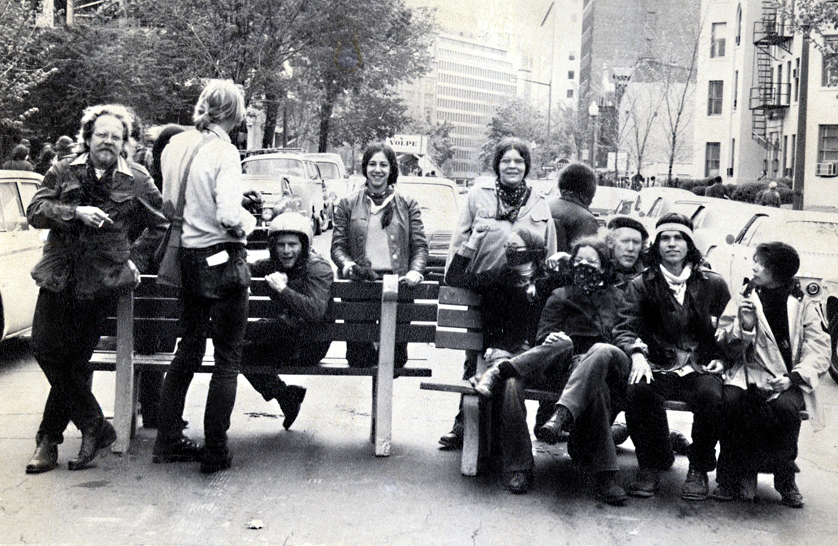 Largest Mass-Arrest in US History

GJEP Founding Board Member Will Miller (far left) with his Vermont-based affinity group in Washington, DC on May 1, 1971 as part of a national call to shut down Washington in protest of the war in Vietnam.  By its end it was the largest mass-arrest in US history.

GJEP co-founder Orin Langelle, who was part of the Youth International Party (The Yippies), was also present at this mass action in DC with his affinity group from St. Louis, MO. He described watching troops in helicopters land in front of the Washington Monument to help put down the protests.

Will, who was a veteran and a member of Veterans for Peace, told the story of his affinity group blockading one of the bridges into DC.  They were met with National Guard troops fresh back from Vietnam.  Their commander told them to fix bayonets and force the protesters off of the bridge.  The soldiers looked at the protesters, and at their commander, put down their weapons and joined the protest.

The 1971 May Day Protests were a series of large-scale civil disobedience actions in Washington, D.C., in protest against the Vietnam War. These began on Monday morning, May 3rd, and ended on May 5th. More than 12,000 people were arrested, the largest mass arrest in U.S. history.[1]

By the middle of 1970 many leaders of the anti war movement had come to believe that tactics of mass marches that had been used during the past six years would not end the war, and that more aggressive actions were needed. Rennie Davisand David Dellinger of the People’s Coalition for Peace and Justice and Jerry Coffin of the War Resisters League began planning the actions; later in 1970 Michael Lerner joined their number.[3] A group known as the “May Day Tribe”[4] was formed: it was made up of Yippies and others among the more militant members of the anti-war movement. It was decided that small groups of protesters would block major intersections and bridges in the capital, under the slogan, “If the government won’t stop the war, we’ll stop the government.”

More than 40,000 protesters camped out in West Potomac Park near the Potomac River to listen to rock music and plan for the coming action. [5]

The Nixon administration secretly canceled the protester’s camping permit. U.S. Park Police and Washington Metropolitan Police, dressed in riot gear, raided the encampment. The police gave the campers until noon to clear out. Some protesters abandoned the demonstration and left the city. The remaining protesters, estimated at 12,000, regrouped at various churches and college campuses in the area.[6]

The U.S. government had put into effect Operation Garden Plot, a plan it had developed during the 1960s to combat major civil disorders. Over the weekend, while protesters listened to music, planned their actions or slept, 10,000 federal troops were moved to various locations in the Washington, D.C. area. At one point, so many soldiers and Marines were being moved into the area from bases along the East Coast that troop transports were landing at the rate of one every three minutes at Andrews Air Force Base in suburban Maryland, about 15 miles east of the White House. Among these troops were 4,000 paratroopers from the U.S. 82nd Airborne Division. Troops from the Marine Barracks lined both sides of the 14th St bridge. These troops were to back up the 5,100 officers of the D.C. Metropolitan Police, 2,000 members of the D.C. National Guard and federal agents that were already in place.[7] Every monument, park and traffic circle in the nation’s capital had troops protecting its perimeters. Paratroopers and Marines deployed via helicopter to the grounds of the Washington Monument.

Protesters announced that because the government had not stopped the Vietnam War they would stop the government[4] and told troops, many of whom were of similar age, that their goal was to prevent the troops from being sent to Vietnam. While the troops were in place and thousands held in reserve, the police clashed with members of the May Day tribe. The protesters engaged in hit and run tactics throughout the city, trying to disrupt traffic and cause chaos in the streets. President Richard Nixon, who was at the Western White House in San Clemente, California, refused to give Federal workers the day off, forcing them to navigate through police lines and May Day tribe roadblocks. Most commuters who tried arrived at their jobs, despite being delayed somewhat. Federal Employees for Peace held a rally the following day in Lafayette Park.

While the troops secured the major intersections and bridges, the police abandoned their usual arrest procedures, roaming through the city making sweep arrests and using tear gas. They detained anyone who looked like a demonstrator. By 8 am thousands of people had been arrested, including many who had not been breaking any law. The city’s prisons did not have the capacity to handle that many people thus several emergency detention centers were set up including the Washington Coliseumand another one surrounded by an 8-foot-high (2.4 m) fence was set up next to RFK Stadium. The prisoners massed against the fence, pushed it over, and were tear-gassed. No food, water, or sanitary facilities were made available by authorities but sympathetic local residents brought supplies. Skirmishes between protesters and police occurred up until about mid-day. In Georgetown, the police herded the protesters and onlookers through the streets to the Georgetown University campus. The police then engaged in a back and forth with the protesters outside the university’s main gate on O Street, lobbing tear gas over the gate each time they pushed the crowd back. Other forms of gas were used including pepper based and one that induced vomiting. Police helicopters also dropped tear gas on the university’s lower athletic field where protesters had camped the night before. Numerous people were injured and treated by volunteers on campus. By afternoon the police had suppressed the protest and held more than 7,000 prisoners.[8]