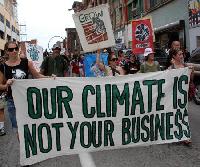 sands of protesters took to the streets 25 September 2009 as the G20 wrapped up their meetings here.  The march stopped three times to listen to speeches and music while thousands of police and combat trained national guard troops lined the sidewalks.  There were no arrests in one of the largest anti-globalization, pro-environment and worker marches since Miami, FL in 2003 when trade ministers met regarding the Free Trade Area of the Americas.