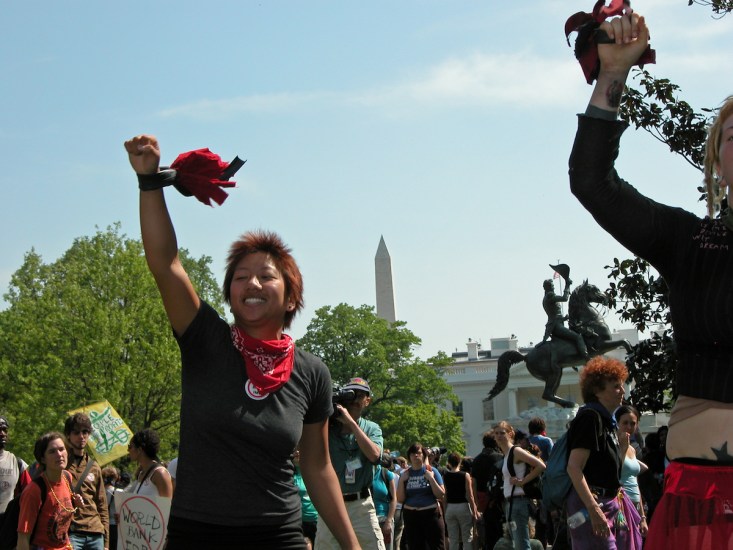 The World Bank has long been protested at its spring and fall meetings in Washington, DC due to its socially and ecologically disastrous policies, which are especially detrimental to women.  It is best known for making development loans to poor countries and forcing them to implement austerity programs to pay back the loans and their skyrocketing interest.  These austerity programs can include privatizing the country’s water and electricity, eliminating public health care programs, and selling off natural resources like forests to the lowest corporate bidder.

This photo was part of a 2015 GJEP exhibit by Anne Petermann titled Triumph and Tragedy: Movements for Change Around the World which can be found here.

Silvia Ribeiro is the Latin American Director of ETC Group (the Action Group on Erosion, Technology and Concentration) based in Mexico. She is a well-known lecturer, writer, editor and educator on emerging technologies (including geoengineering and biotechnology) and collaborates with a wide spectrum of Latin American organizations and social movements. Silvia is part of the editorial committee of the magazine ‘Biodiversidad, Sustento and Culturas’, and regularly publishes articles, including in Mexico’s ‘La Jornada’ and in Desinformemonos.org. With ETC group, Silvia has participated in the negotiations of several UN Treaties on biodiversity, food, environment. She has critically followed the debate and developments of geoengineering and its actors for over a decade.

The environmental and social devastation caused by flooding millions of acres of wild ecosystems for hydroelectric dams belies the idea that these dams are “green” or “climate-friendly.” Dam reservoirs release vast amounts of methane, exacerbating climate change, and poisoning people and wildlife with methylmercury.

Geoengineering on a Global Scale

In our conversation with Silvia Ribeiro, Latin American Director for ETC Group, we discuss geoengineering, the radical techno-fix to climate change. Geoengineering comprises dangerous attempts to alter climate on a global scale. Environmental groups are concerned with the unknown dangers of geoengineering, including its disproportionate risk to countries and people least responsible for global warming in the first place. Interview by Steve Taylor, Press Secretary of Global Justice Ecology Project.

Mike Africa, Jr. Responds to City of Philadelphia Apology for 1985 Bombing of MOVE House. GJEP first interviewed Mike Africa, Jr. of the MOVE organization during the October 2019 North American Forest and Climate Movement Convergence, which GJEP co-organized, and where Mike was a keynote speaker. In this interview, we catch up with Mike to talk with him about what has happened in his life since that time. In the interview, he discusses his anger over the unjust handling of the Capital riots, a recent HBO documentary that features his work to free his parents from prison, and the apology issued by the city of Philadelphia to the MOVE organization over the 1985 bombing of a MOVE house which killed 11 including 5 children.

The mission of the Campaign to Stop GE Trees is to protect forests and biodiversity, and provide support to communities threatened by the dangerous release of genetically engineered (GE or genetically modified) trees. This year we’re celebrating 21 years of movement building work to spread the word about the threat of GE trees. We’re working to coordinate a national alliance of organizations, scientists, Indigenous peoples and others who have come together with the goal of protecting wild forests, biodiversity and communities from GE trees. Join us as we build our movement to stop the dangerous release of GE trees.

NAMRA’s mission is to protect rivers and their communities by resisting megadams and associated transmission corridors. NAMRA seeks to:

Sign NAMRA’s petition to Governor Baker in Massachusetts and Governor Mills in Maine to stop the NECEC corridor and to NYC Mayor DeBlasio to stop the CHPE corridor.

Three-part webinar series (2021): What’s new in the campaign to save rivers and their communities? Register here. 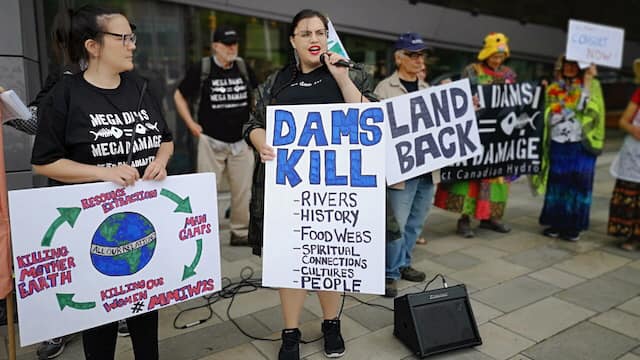 to help advance our important work!