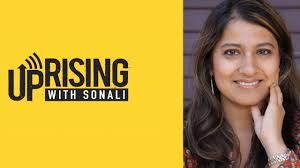 Prior to taking off to Paris for COP21, University of Southern California
international relations professor Shannon Gibson spoke to Uprising Radio host Sonali Kolhatkar about the role of civil and uncivil society in climate activism.

Outside the meeting, where climate justice activists have traditionally held the delegates’ feet to the fire, this time around, when the stakes are higher than ever, protests have been banned. French President Francois Hollande, citing the recent Islamic State attacks in Paris, has banned organized marches and rallies.