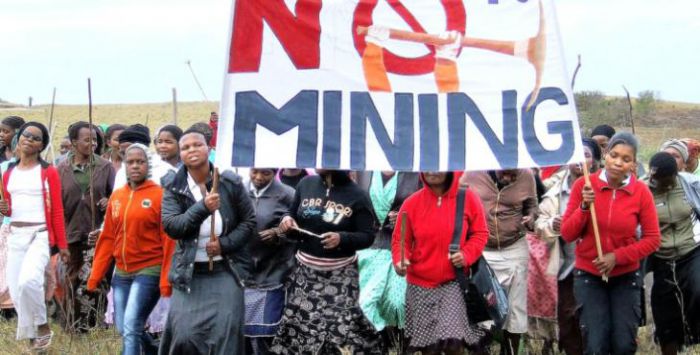 The following letter has been sent from Sustaining the Wild Coast (SWC) to the Department of Mineral Resources (DMR) regarding the violence and intimidation at Xolobeni and the role of the DMR in facilitating and allowing it to continue.

The flood of civil society support and correspondence sent to the DMR has surely put some pressure on them, as the Minister’s Chief Advisor and the Direct-General of the DMR are visiting Xolobeni today (8 April 2016). We look forward to the updates from the Amadiba Crisis Committee (ACC) regarding this visit.

Sustaining the Wild Coast (SWC) wish to object in the strongest possible terms to the erosion of the rule of law, violations of human rights, and the undermining of democratic processes and the Constitutional rights of communities who reside along the Pondoland Wild Coast, and who would be directly affected by proposed mining of the Xolobeni area by the Australian mining company Mineral Commodities Limited (MRC), their South African subsidiary Transworld Energy and Minerals (TEM) and local BEE empowerment company Xolco.

SWC therefore strongly protest that, by accepting a mining rights application in 2015 instead of revoking the prospecting right of MRC and subsidiaries, the Department of Mineral Resources (DMR) are not only complicit in violations of all the above Constitutional rights on mining affected Pondoland communities, but also of perpetuating a self-deceiving fiction about the developmental benefits of mining for affected rural communities. We believe that the DMR’s irrational and ill-considered acceptance, despite vociferous objections from affected communities, is directly responsible for heightened tensions in the area that have led to the suspected assassination of popular community leader, anti-mining activist and Chairman of the Amadiba Crisis Committee (ACC), Sikhosiphi ‘Bazooka’ Rhadebe, who was murdered on the evening of Tues 22 March, 2016, in front of members of his family.

Ever since the idea of mining emerged into the public domain in 2003, MRC and their BEE partners Xolco have punted the idea that mining would bring developmental benefits. SWC has searched for an example of a rural community that has been resettled to make way for a mining operation, actually benefiting from an enhanced quality of life from the resettlement. We have asked academic geologists and other professionals in the mining industry to assist us, but have yet to find a single case study anywhere in the world where a mining affected community has been left better-off from resettlement.

The DMR have also failed to provide any convincing evidence, despite repeated visits to the Amadiba community to try and change their minds, of how mining would benefit local people. By contrast the list of case studies of the opposite has been endless.

The DMR persists in the notion that the course of action it has taken is one of impartial review, with both sides of the story being weighed up. Yet this is not a case where matters can be balanced on a scale. It is well known that mining affected Pondoland communities have strongly resisted the idea of mining in the region. Should the mining proceed, a rural community whose culture is deeply embedded in the land, would lose its land, its cohesion, its history, its custom and culture, its means of livelihood and subsistence, and its dreams and visions of the sort of future it would like to build; a future based on eco-tourism and agricultural development. In this sense, the mining proposal reminds of the forced removals that were meted out on rural and other communities during Apartheid. It also reminds of the ‘Betterment’ schemes that were so fiercely resisted in Pondoland in the 1960’s and resulted in the Pondoland Revolt.

The Department also persists in maintaining the illusion that the mining affected communities themselves are conflicted about the mining. This is patently not the case. The affected communities formed the local organisation the Amadiba Crisis Committee (ACC) because people who lived in the area to be mined were united against external forces that did not live in the area and would therefore not be directly affected by mining, who were promoting mining as a development solution.

Despite repeated calls by mining affected communities for the mining application to be refused, DMR saw fit to accept a mining rights application in 2015, in effect turning a blind eye to local wishes in favour of foreign corporate interests.

DMR and South African government have also repeatedly turned a blind eye to reports by concerned organisations and individuals about ongoing intimidation and harassment of community members who are opposed to the mining. These are as follows:-

The set of full reports can be viewed on https://www.dropbox.com/sh/ninnzlwdvo5sibh/AABRfmUQySp-xH_zvd-dnCtra?dl=0

In light of the latest crisis, SWC urgently call on DMR to restore its credibility and fulfill its legal and Constitutional obligations to South African citizens, by immediately revoking, once and for all, MRC’s prospecting permit (as well as the associated mining permit application) for the Xolobeni mine and by initiating an impartial enquiry into MRC, TEM and Xolco’s roles in perpetuating human rights violations in the area.