BNP Paribas will not leave the Cayman Islands: on December 3rd, we are taking over the BNP headquarters!

On Monday, November 23, a group of “chair stealers” (1) was received by representatives of the executive management of Groupe BNP Paribas (2). The bank is still refusing to meet the request issued by chair stealers, namely to stop its operations in tax havens such as the Cayman Islands. We are therefore calling for a new round of civic requisitions of chairs during and after the COP21. Our first action of this new round will take place on Thursday, December 3 at 10am at the BNP Paris headquarters, Boulevard des Italiens.

According to the BNP Paribas representatives, its US-based subsidiaries have, “like any other US banks,” branches in the Cayman Islands, and do not use them to facilitate tax evasion but rather to benefit from the simplified formalities the “regulatory haven” (sic) offers. 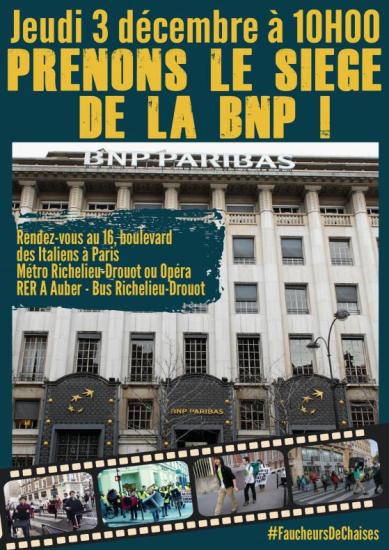 Due to “the evolution of regulation” and “business trends,” the number of BNP Paribas subsidiaries and branches in the Cayman Islands went from 7 in 2013 to 5 in 2015, and 4 in 2016. Yet, the bank has no intention whatsoever to shut down the remaining subsidiaries.

Let’s not play with words! Not only do the Cayman Islands allow tax evasion, they also make it possible to bypass justice and the rules of financial prudence. They remain an opaque territory that engages in doubtful practices with impunity. There are only so many examples that illustrate the role played by tax havens and their questionable legal and regulatory systems in the disruption of international finance and the funding of mafia and terrorist networks.

During the COP21, of which it is a sponsor, BNP Paribas cannot afford to leave the requests formulated by civil society unanswered. We are therefore calling to start a new round of civic requisitions of chairs in the agencies of the banks engaging in tax, legal and regulatory evasion practices, starting with BNP Paribas.

On Thursday, December 3 at 10am, we are calling for a civic requisition at the BNP headquarters in Paris, 16 Boulevard des Italiens. The money to combat climate change does exist: it is hidden in tax havens!