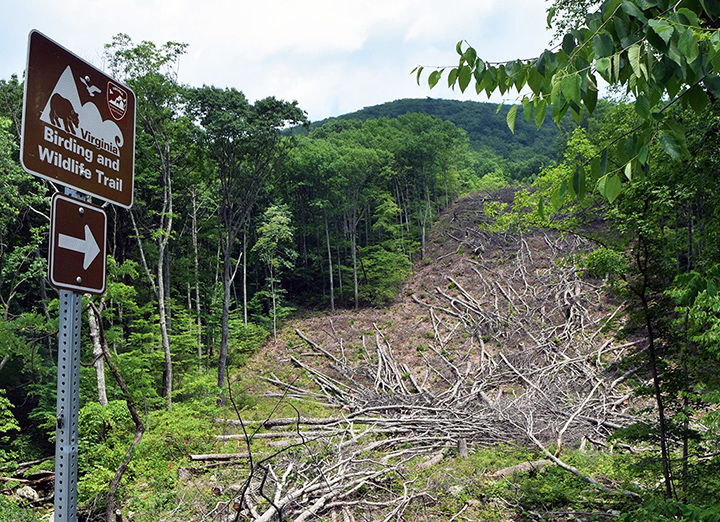 Clearcut area of forest by Dominion Energy for the Atlantic Coast Pipeline. This cut is near Wintergreen Resort, a four-season mountain resort on the eastern slopes of the Blue Ridge Mountains, located in Nelson County, Virginia. Photo: Langelle

Calling Virginia’s review of a controversial compressor station in the historic Buckingham County freedmen’s community of Union Hill “arbitrary and capricious,” a federal court on Tuesday stripped the facility of its permit and ordered the State Air Pollution Control Board to reconsider the case.

The decision is the latest blow to the Atlantic Coast Pipeline being developed by a consortium of companies led by Dominion Energy. The proposed Union Hill station is one of three compressor facilities planned along the 600-mile route from West Virginia to North Carolina.

“It’s the eighth permit that this pipeline has lost, either in federal court of having been withdrawn by a federal agency,” said Southern Environmental Law Center attorney David Neal, who represented the Friends of Buckingham group in opposition to the facility.

One such permit revocation has been appealed to the U.S. Supreme Court, which will hear the case in February.

Wednesday’s ruling by the 4th Circuit Court of Appeals in Richmond, penned by Judge Stephanie Thacker and joined by Chief Judge Roger Gregory and Judge James Wynn, offered harsh criticisms of both the Department of Environmental Quality and the air board, which issued a permit for the compressor station last year.

The judges condemned the agency and the board for their failure both to consider the use of electric motors rather than gas-fired turbines at the proposed station and to evaluate the environmental justice impacts of the facility.