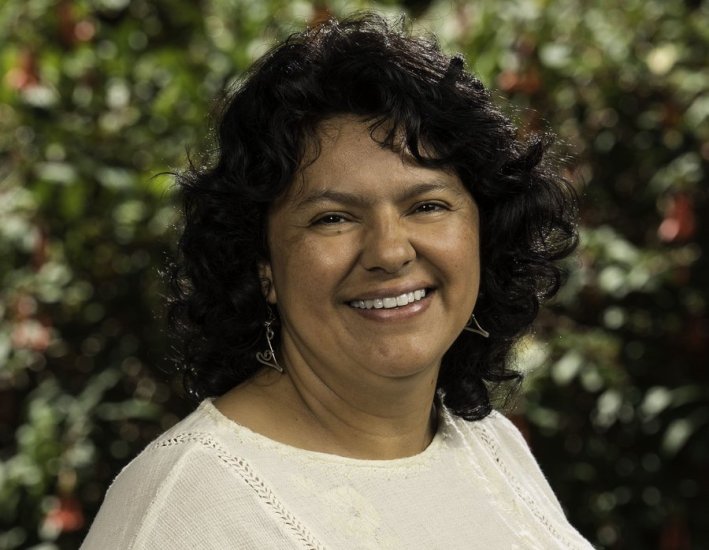 Join Witness for Peace, SOA Watch, and the Honduras Solidarity Network for “Justice & Solidarity for Berta Cáceres and COPINH” a webinar live from Honduras March 16 at 8:30 Eastern/7:30 Central/6:30 Mountain/5:30 Pacific.

Cáceres was shot and killed on 2 March 2, 2016, less than a year since she was awarded the 2015 Goldman Environmental Prize, which recognizes grassroots environmental activists from around the world.

Witness for Peace made the following statement:

Witness for Peace is devastated by the assassination of Berta Cáceres Flores, the General Coordinator of the Civic Council of Popular and Indigenous Organizations of Honduras (COPINH), and one of the country’s leading indigenous activists. She dedicated her life to the defense of land, natural resources and indigenous people’s human rights to their ancestral territories. She received the 2015 Goldman Prize in recognition of her incredible leadership and activism throughout the past three decades.

We express our deepest condolences to Berta’s family and friends, to our compañeros and compañeras at COPINH, and allies of the Lenca community in the wake of this tragedy.

Witness for Peace began working with Berta and COPINH in the aftermath of the US backed 2009 coup and has walked with them in solidarity since, in awe of their courageous commitment and tireless work to demand justice.

They can cut all the flowers, but they can never stop the spring from coming.
¡Viva Berta! ¡Viva COPINH! 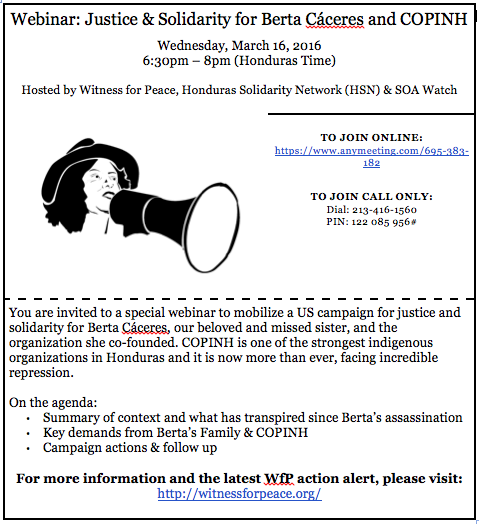 Also, March 14 is the last day to encourage your Rep. to sign the Ellison-Johnson letter demanding justice for Berta Cáceres and U.S. policy change. Sign up now here.