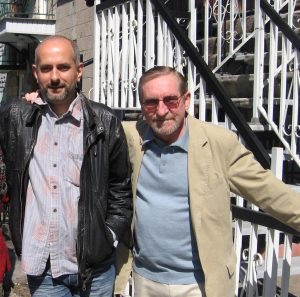 Aziz Choudry with Orin Langelle in Montreal in 2006.

We at GJEP got the shocking news that our close friend and comrade Aziz Choudry, a founding member of GJEP’s Board of Directors, passed away on Wednesday, May 28, 2021 at his home in Johannesburg at a mere 54 years of age.

GJEP Co-founders Anne Petermann and Orin Langelle met Aziz in Wellington, New Zealand at a global forest strategy meeting with the Native Forest Network back in November of 2000. They hit it off immediately. When GJEP was founded in 2003, he was invited to be a founding Board member and accepted without hesitancy.

As a Board member he helped GJEP hone our mission, vision and programs.  He was at once serious and amused, with a wry sense of humor and a love of the absurd.

Aziz had an incredibly deep and sharp analysis of neoliberalism, global economic domination, and social injustice, and was a key part of the organizing that launched the anti-globalization movement in the late-1990s. When the World Trade Organization’s (WTO) repeated failures in Seattle, Cancun and Davos, and the Free Trade Area of the America’s (FTAA) defeat in Miami signaled a shift away from global trade deals, Aziz helped found Bilaterals.org in 2004, which analyzed and exposed the rise of equally dangerous yet far less visible bilateral trade deals. He pulled no punches in his critique which left few unscathed, and which he documented in an amazing ten books and countless other writings (see link below).
One of these books, Learning Activism was illustrated with photographs by GJEP’s co-founder Orin Langelle, who was working with Aziz on a sequel to that book when Aziz passed away.

You can read one of many tributes to Aziz written by his close colleagues at GRAIN and bilaterals.org here: https://grain.org/en/article/6681-in-honour-of-aziz-choudry 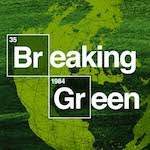 Produced by Global Justice Ecology Project, Breaking Green is a podcast that talks with activists and experts to examine the intertwined issues of social, ecological and economic injustice. Breaking Green also explores some of the more outrageous proposals to address climate and environmental crises that are falsely being sold as green. Listen here.

Hoodwinked in the Hothouse

At a time when governments are rolling out climate change policies around the world, activists and experts from climate and environmental justice groups across North America and globally are explaining why real climate solutions must go beyond the greening of business-as-usual and require an entirely different framework for addressing the climate crisis. These groups, including GJEP have come together to publish the Third Edition of Hoodwinked in the Hothouse: Resist False Solutions to Climate Change to highlight the need for real solutions that go beyond the profit motive. Download at climatefalsesolutions.org

Recent Media Coverage
Introduction to Genetic Engineering. What are GMOs?
This newly available resource from the Campaign to STOP GE Trees and Canadian Biotechnology Action Network is a comprehensive guide to genetically modified organisms (GMOs) and genetic engineering. This easy to read, 4 page PDF can be downloaded at stopgetrees.org/resources
Cloned American Chestnut: a Trojan Horse for the End of Nature?
“The idea that technology may be the only way to save the natural world from wholesale environmental disaster underscores the level of complete dominance the human species is exerting on the planet’s ecosystems.  Can humanity’s reliance on technology that has brought us to the brink of extinction also be our salvation?”
*This piece by Steve Taylor, GJEP’s Press Secretary, was published in CounterPunch in 2019 and has recently resurfaced as a critical piece in the narrative of values-based discussions within the campaign.

What’s your background?
Professionally, I am the Assistant Director of Global Justice Ecology Project and a member of the Campaign to Stop GE Trees steering committee. My educational background includes a MA in Resilient Leadership from Naropa University and a BA in English. I am also a 500 hour registered yoga teacher and certified prenatal and postpartum doula.
How did you get involved with the Campaign to Stop GE Trees?
Naropa afforded me the opportunity to study living systems theory, ecopsychology, sustainability, climate justice, human rights, environmental policy, nonprofit management, entrepreneurship, and mindfulness. More importantly, for the first time in my life, I was surrounded by others who had the same misgivings I did about our current social, cultural, and political landscape. Luckily, shortly after graduating from Naropa I unintentionally found myself back in Buffalo, NY where I hooked up with the similar minded co-founders of Global Justice Ecology Project, Anne Petermann and Orin Langelle.
To continue reading visit: https://stopgetrees.org/about-theresa/

GJEP enables small non-profits to focus their energy on their important work by acting as a fiscal sponsor. This helps them minimize bureaucracy so they can focus on their missions. These groups are doing crucial work for ecological and social justice, forest protection and human rights and include Biofuelwatch, North American Megadams Resistance Alliance, Vermont Street Medics, Save the Pine Barrens, A Center for Grassroots Organizing, Canadian Biotechnology Action Network, and REDD-Monitor.

On 24 May 1990 in Oakland, California, Earth First! organizer Judi Bari (center) was blown up by a motion-sensitive pipe bomb placed under the driver’s seat of her car. The bombing happened in the midst of Redwood Summer, a major national campaign to stop the logging of the ancient redwood trees, which Judi was leading.  At the time, Judi was also breaking ground by creating alliances with loggers in northern California who were going to lose their livelihoods due to the dramatic and unsustainable acceleration of the rate of logging in the redwood forests–the result of the hostile takeover of Pacific Lumber by the Maxxam corporation, which intended to liquify PL’s holdings, i.e. redwood forests, to pay off their junk bond debt.
While still in critical condition with a shattered pelvis and other major injuries, Judi was arrested by the FBI for “transporting explosives”. It is largely understood that the attempted assassination of Judi and her subsequent arrest was due to her successful work to unite environmentalists and loggers.  A lawsuit against the FBI for violating her civil rights was victorious, resulting in a $4 million settlement.  Judi passed away from cancer before the lawsuit was concluded.
Photo: Orin Langelle/photolangelle.org (1994)