Youth Occupation in the hallway outside of the UN negotiations at the UN Climate COP in Durban, South Africa in 2011. Photo: Petermann

IPCC Report is Reality Check; But False Solutions Must be Rejected

9 August 2021–Today, on the International Day of the World’s Indigenous Peoples, the UN Intergovernmental Report on Climate Change (IPCC) released a press release announcing the publication of their new Sixth Assessment Report.  The document is the scientific consensus on the state of climate change, created by 234 authors from 66 countries. The need for consensus means that while the report is predictably dire, it is also conservative in its findings.

Previously, the IPCC declared that a fundamental systemic transformation was crucial if we were to address climate change and have a liveable future.

This report echoes these sentiments. “This report is a reality check,” said IPCC Working Group I Co-Chair Valérie Masson-Delmotte. “We now have a much clearer picture of the past, present and future climate, which is essential for understanding where we are headed, what can be done, and how we can prepare.”

Unfortunately, the report was written under the baseless premise that our so-called world leaders will solve the problem for us–specifically referencing the upcoming UN Climate Conference (COP26) this November in Glasgow. 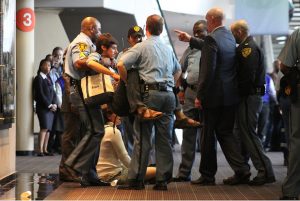 GJEP attended and mobilized around UN Climate COPs beginning in 2004 and ending in 2011 when I was barred from attending future COPs following three years of unpermitted protests organized by GJEP and others at the Climate COPs, and culimating in a direct action during a youth occupation in the hallway outside of the negotiations.  We decided that no good would ever come of these climate COPs. The 2015 UN “Paris Agreement”, with its voluntary and utterly inadequate targets only served to strengthen this conviction.

In fact, The Paris Agreement has only gotten worse, now looking to corporate controlled and profit-oriented false solutions as the best way forward.  This focus is highlighted in the last sentence which concludes the IPCC’s press release: “Stabilizing the climate will require strong, rapid, and sustained reductions in greenhouse gas emissions, and reaching net zero CO2 emissions. Limiting other greenhouse gases and air pollutants, especially methane, could have benefits both for health and the climate,” said Zhai.

Emphasis on ‘net zero’ in the report undermines the entire point the IPCC appears to be trying to make.  Net Zero, which relies heavily on offsets, is a false solution aimed at prolonging business as usual and avoiding the real, transformative action we must collectively take.

To learn more, check out several excellent reports on the Net Zero scam we have collected on our website.

If you are interested in an analysis of the various false solutions being promoted by business at the UN and elsewhere, please read Hoodwinked in the Hothouse: Resist False Solutions to Climate Change

As La Via Campesina, the global peasant’s movement points out, along with indigenous peoples’ groups and ally groups from around the world, we do not need high-tech new approaches to solve climate change.  There are thousands of existing real-world solutions being practiced already in communities all over the planet. These solutions must be lifted up and those of us in so-called “developed countries” can learn from these solutions to create paths forward in our own communities.

We can not wait for our “leaders” to solve the problem for us.

For a 15 minute documentary on COP 25 in Madrid in preparation for the upcoming COP 26 in Glasgow, Scotland visit Indigenous Environmental Network or watch it on YouTube.