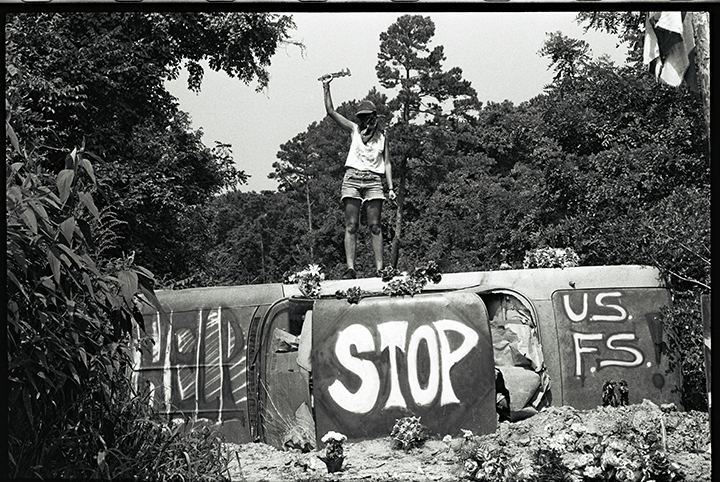 Note: In commemoration of Indigenous Peoples Day this year and to highlight all of the struggles for land waged by the Mapuche and Indigenous Peoples around the planet that continue to this day, we offer the attached article and photo essay. Thirty years ago, from July through August of 1990, Mohawk warriors from Kanesatake inspired Indigenous Peoples and eco-activists across North America and around the world when they rose up to defend their ancestral lands. They inspired activists at Redwood Summer in California, which was organized by the late Judi Bari and others to save the last of the ancient redwoods from the chainsaw; and others at the 80-day occupation of the Shawnee National Forest in Southern Illinois organized to stop logging in critical songbird habitat. GJEP co-founder Orin Langelle documented the uprising in the Shawnee including the above photo, which was staged to demonstrate solidarity with the uprising in Oka, inspired by the AP photo that appears at the beginning of the attached article from Mashable.

The Oka Crisis: The Mohawk protest that became an armed seige

“In the summer of 1990, long-simmering tensions among the First Nations of Canada reached a flash point around the Kanesatake Mohawk reservation 30 miles west of Montreal.

The reservation was surrounded by the town of Oka, which was preparing to build a members-only golf course and luxury condo development on a pine grove and cemetery where many Mohawk families’ ancestors were buried. The Mohawk had been contesting the Canadian claim to these sacred lands for centuries, but the courts rejected their attempts.

A determined group of Mohawk protesters finally took matters into their own hands, erecting a protest camp and barricades on the road to the proposed development site.”