The Role Of Lenca Culture In Defending Lands, Waters, And Peoples In Honduras: An Interview By Pascuala Vásquez

Part of a series remembering Berta Cáceres from Otherworldsarepossible.org

Beverly Bell: You’ve been part of COPINH for many years, correct? 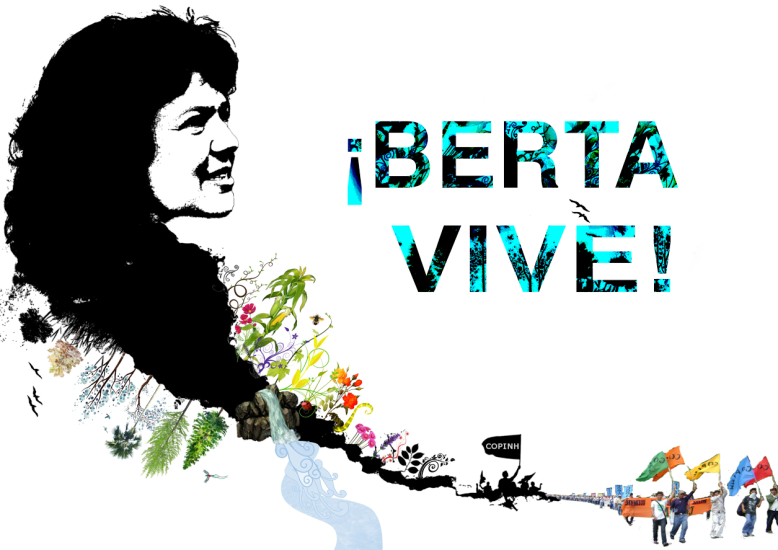 Pascuala Vásquez: I’ve been struggling with COPINH since the very beginning. We started with schools, pressuring the government so the children could learn to read and write. There weren’t schools; everyone had to travel far to study a bit.

COPINH’s first victory was to successfully negotiate with the government so that mayors of our townships weren’t just imposed by the government, but so we could have assemblies and elect them democratically.

Then we got community titles to our lands, 22 titles. Then we kicked out the lumber companies, lots of them, who were stealing our wood.

This was all in the very beginning [in the 1990s]. Now they say that because they killed Berta [Cáceres, COPINH’s cofounder and leader], COPINH will stop existing, we will give up. No, we will continue. We have to.

I see a lot of attention [to our work] these days. There are visitors from other countries all the time, new delegations coming. They’re helping us pressure the courts [regarding Berta’s and Gustavo Castro Soto’s trials] and pressure the state. 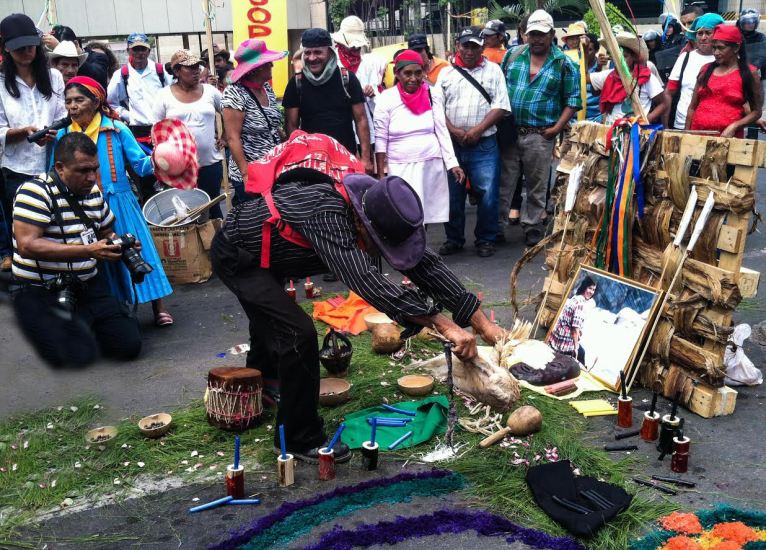 Lenca spiritual practice is part of every political action. Here, at a ceremony in front of the Presidential Palace, Vásquez (upper left corner, in red headscarf) offers a prayer. Photo: Beverly Bell

Pascuala Vásquez is the spiritual leader of the Council of Popular and Indigenous Organizations of Honduras (COPINH). Known affectionately to all as Doña Pascualita, she is also head of COPINH’s Lenca cultural committee, and is on the council of elders.

The struggle isn’t dead. We’re very alive. We have more compañeros and compañeras who are willing to move forward. We won’t get discouraged.

They [the government] are making us angrier, they’re lighting up this fire. So let’s light it up! We have to move forward. We need justice.

We’re fighting for Mother Earth because that’s where life resides. That’s where health resides: the lands, the rivers, the mountains. If we don’t defend them, the new generations will be left with nothing. If we let dams be built, we’re allowing projects that are against the people and Mother Earth.

That’s what we stand for as COPINH. If they think we will go away, that’s not going to happen. We’re protesting at the presidential palace and national congress.

BB: What is the relationship between the Lenca spirituality that you speak of and COPINH’s struggle?

PV: To defend our territories, spirituality must come first. We start with prayer. We explain what we want and request guidance, and from there we move on. We ask God to defend us from danger and deliver peace. We don’t want war. We don’t want them sending people to destroy our communities and harm our women.

That’s also why we speak to government and mayors, and conduct [community] assemblies, and fight. The Earth is of the poor, the children and the people. Not the rich man.

This is a call to stop the killing of women who are fighting. We need a change. We need peace. Why do they [the government, the dam company] have such darkness in their hearts? We’re sons and daughters of the same Mother Earth.

BB: You are the head of the Lenca Cultural Committee of COPINH. Please tell us about the relationship between the Lenca culture and this struggle. 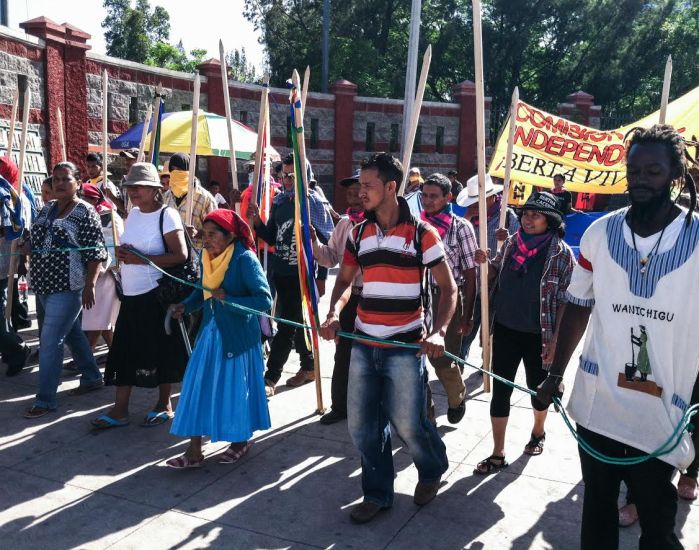 PV: The Lenca culture is the inheritance of our ancestors, based on a relationship with our spirit guides, through ceremony and offerings. The spirits take care of the river.

In relation to our culture, I’ll tell you a story about a man who had planted a corn field. This man’s corn was destroyed by a landslide, and everything was lost. When he came the next day, he found the corn field again intact, with a child in the middle. The child told him he had to make an offering to the Earth. The children are the ones who take care of the Earth and they need to be offered things in return. We give them our offerings. We look to the four cardinal points. We make a hole in the Earth and put in [the sacred beverage] chichi and cacao, corn. We have candles, and someone offers the prayers. That’s the culture that was born from the experience with corn.

Anyone who doesn’t make offerings and do ceremony for the earth, it’s just a matter of time until something befalls him or her. If it’s not a hurricane that wipes out corn fields, maybe it’ll be a landslide. Houses are destroyed. We need to do ceremony for the houses, too, to allow the inhabitant to live there and live in harmony with the spirits.

This is the culture and the history our ancestors left us. The earth is our inheritance, if we commit to preserving the Lenca culture and doing blessings with everything that’s required.

Bertita [the affectionate nickname for Berta] was always encouraging this. We made offerings to the rivers. We had five ceremonies in Rio Blanco, in the communities, in the rivers, in the mountains. We did blessings and created altars.

I’ve gone to Mexico, to El Salvador, Guatemala, and Costa Rica, to do ceremonies for the protection of rivers.

BB: Before we close, would you like to speak about the legacy of Berta Cáceres?

PV: Yes. About Berta: She’s not dead. If the government set out to kill her, they didn’t. We’re in communication with her. She’s fighting with us. We feel accompanied by her. We always ask for her strength to accompany us in spirit. She’s with us to encourage us and give us light in what we should do. This fire hasn’t been put out. Bertita’s spirit is here.

Bertita left the road paved for us. She reinforced the Lenca culture, ensuring that there were many ceremonies, blessings of the rivers, of the communities.

That’s the legacy and the path she left us, to bless Mother Earth. That’s the obligation of COPINH, since we started, and we’re continuing.

We fight for the well-being of our children, and to defend the lands and rivers. That’s where life lies.