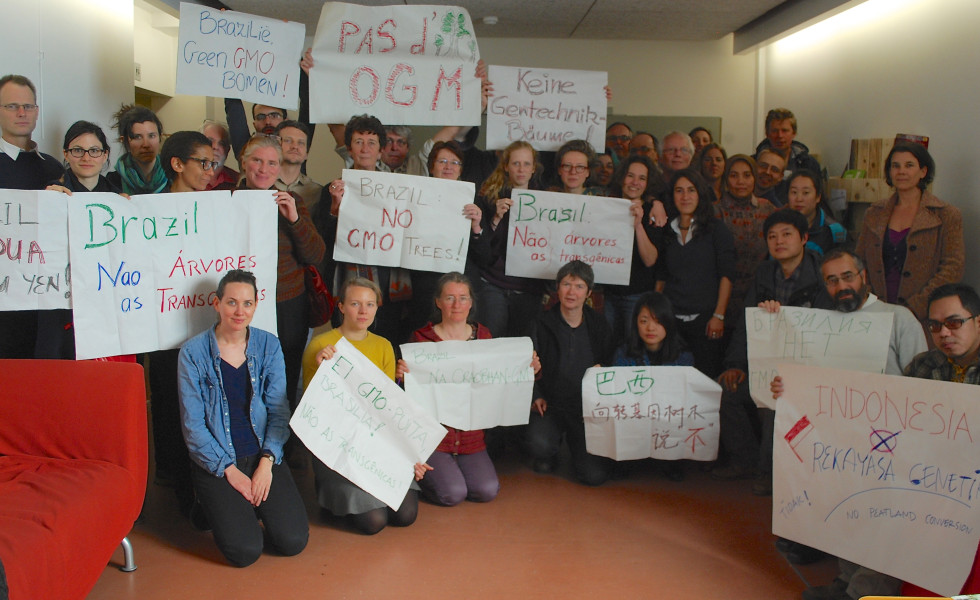 Concerned citizens demonstrated at Brazilian consulates and embassies located around the world this week, as part of a second week of global protests demanding that the Brazilian government reject an industry request to commercialize genetically engineered (GE) eucalyptus trees.

In Brussels, Belgium, dozens of people representing organizations from around the world traveled from the European Parliament to the Brazilian Embassy where they rallied against GE trees and delivered letters of protest. In Melbourne, Australia, protesters dressed as koalas, owls and other forest creatures rallied against GE eucalyptus trees at the Brazilian consulate. Other demonstrations took place in Europe and North America.

This week’s actions follow a wave of protests against GE trees at Brazilian embassies and consulates on 3 March 2015. These protests were directed at a 5 March 2015 meeting of the Brazilian Technical Commission on Biosafety (CTNBio), which was to decide whether or not to approve a request by FuturaGene to commercially release GE eucalyptus trees in Brazil. The meeting was interrupted by 300 peasants organized by La Via Campesina and eventually cancelled [1].

Earlier on the morning of 5 March, 1,000 women of the Brazil Landless Workers’ Movement (MST) and activists from other rural and urban social movements from the states of São Paulo, Rio de Janeiro and Minas Gerais occupied the operations of FuturaGene.

A woman from The MST who took part in the action stated, “The landless women came here to denounce, to reject, to say that this model of agribusiness is the model of death, not of life. We the landless women are here to defend a model of life, defend food sovereignty, and defend agrarian land reform.”

CTNBio and FuturaGene rescheduled their meeting regarding GE eucalyptus trees for 9 April, sparking the latest series of protests against GE eucalyptus this week.

“These weeks of protest against GE trees in Brazil demonstrate the renewed commitment of organizations, activists and social movements around the world to ensure that GE trees are never legalized,” stated Ruddy Turnstone, a campaigner with Global Justice Ecology Project and the Campaign to STOP GE Trees who rallied at the Miami, Florida Consulate on 31 March.

In November 2014 scientists, foresters, agronomists, Indigenous Peoples and other experts from six continents met in Asunción, Paraguay to discuss the problem of genetically engineered trees. They recently finalized the Asunción Declaration, which calls for the outright rejection of all GE trees, including those in field trials [2].

In the US, a similar request to the USDA from GE tree company ArborGen to legalize their GE eucalyptus trees is currently pending [3].