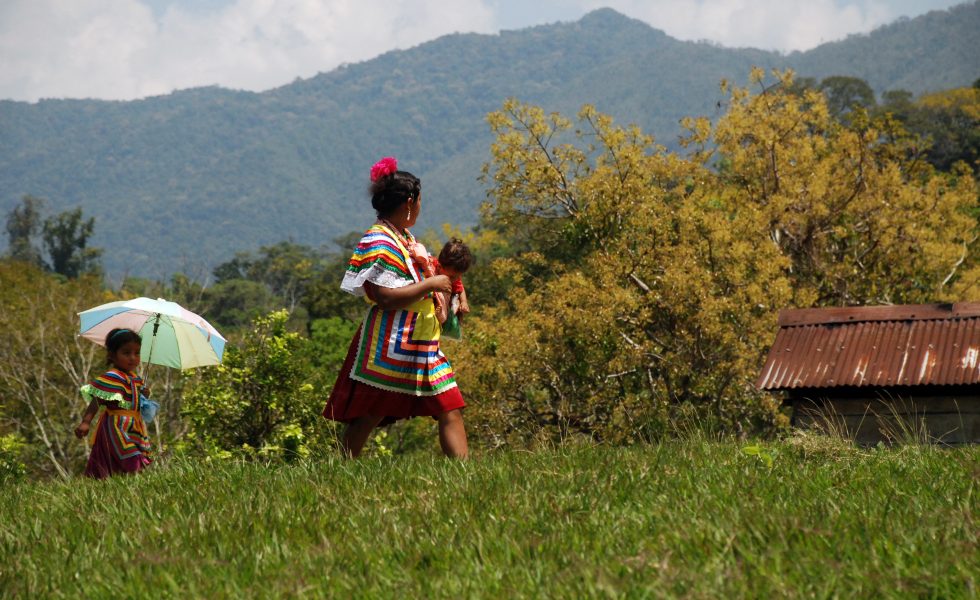 In 2011, the Indigenous community Amador Hernandez, in Chiapas, Mexico was targeted for a carbon offset project that would have forced the inhabitants to leave in order to “protect” the carbon in the trees.  This carbon could then be purchased by polluters in the US to “offset” their pollution rather than reduce it. While the community was not relocated at the time, an increase in demand for carbon offsets, such as proposed in the Green New Deal could increase risks to rural indigenous and forest dependent communities such as this one.  Photolangelle.org

A key factor in the momentum behind the Green New Deal is its promised blend of environmental policy, job creation, and social justice — specifically centering on the experiences and voices of those most affected by climate change and the fossil fuel industry. Speaking at a press conference introducing her new resolution for a Green New Deal on Thursday, Representative Alexandria Ocasio-Cortez called it “a really big day” for social justice and indigenous peoples.

But some critics say the legislation as it’s currently written falls short when it comes to protecting the vulnerable communities key to the heart of the resolution. Instead of calling for a carbon-free economy, the resolution lays out a plan to achieve “net-zero” greenhouse gas emissions in ten years by implementing “clean, renewable, and zero-emission energy sources.”

A Green New Deal that leaves nuclear, carbon capture, on the table

There are two phrases to pay close attention to there: net-zero and zero-emission energy sources.

Basav Sen, climate justice project director at the Institute for Policy Studies, tells Grist that the term “net-zero” is a red flag for many environmental justice advocates who were pushing to eliminate emissions in the first place. In contrast, Sen says “Net-zero” means the resolution would allow high-carbon emitters to continue to operate, but offset their emissions with green projects or use emerging technology that scrubs carbon either from polluting point sources or directly from the atmosphere.

“Net Zero emissions, which equate carbon emission offsets and technology investments with real emissions reductions at source, would only exacerbate existing pollution burdens on frontline communities,” Angela Adrar, executive director of the national Climate Justice Alliance wrote to Grist. Carbon offsets are not always located in the same communities where the emissions are created, resulting in a pollutants concentrating in communities bordering polluters.

“Our communities can no longer be used as sacrifice zones,” Adrar said.

And what about the phrase “zero-emission energy sources?” Turns out that doesn’t necessarily bode well for vulnerable communities either. As Grist’s Nathanael Johnson writes, “In wonk-speak, ‘zero-emission is code for nuclear power or fossil fuels with carbon capture.”

Dallas Goldtooth is a campaign organizer for the Indigenous Environmental Network, which is one of several environmental justice groups who reject the idea of Green New Deal that leaves the door open to an energy mix that includes fossil fuels and nuclear energy. It’s part of a larger movement to keep fossil fuels and uranium, a necessary component for nuclear energy, “in the ground.”

“While we applaud its intentions, we feel that [the resolution] falls short in protecting indigenous communities,” Goldtooth told Grist. “Explicitly talking about keeping fossil fuels in the ground, that’s a critical issue.”

Uranium has a dark history in many indigenous communities. The Navajo Nation is still grappling with the legacy of uranium mining on its land — where 30 million tons of uranium ore were extracted between 1944 and 1986. An ongoing study into Navajo births found traces of uranium in newborns’ systems and recorded high levels of uranium in adults’ urine in nearly 30 percent of its roughly 600 participants. Uranium contamination has been linked to kidney failure and cancer, both of which are prevalent in the community, according to a 2016 NPR report.

To read the rest of the article, visit: https://grist.org/article/the-green-new-deal-may-be-falling-short-on-its-environmental-justice-promise/