Ellen Gerhart, 63, has been targeted by Energy Transfer Partners with contempt of court claims for monitoring pipeline construction on her own land.

Huntingdon, PA: On July 27, four officers with the Huntingdon County Sheriff’s Department arrested Ellen Sue Gerhart, 63, on her own property. The arrest comes after pipeline builder Energy Transfer Partners filed a motion to revoke Gerhart’s bail, making a slew of ludicrous claims against her. Among ETP’s claims, supposedly Ellen baited bears and mountain lions onto the easement of the Mariner East 2 Pipeline which runs through the Gerhart property. Mountain lions have not been spotted in Pennsylvania since the 1930s.

Ellen Sue Gerhart is a retired special ed teacher and longtime Huntingdon County resident who has lived on her family’s land for 35 years in peace. The numerous claims made against her – as well as her late-Friday arrest – appear to constitute direct retaliation for Ellen and her family’s legitimate, ongoing advocacy to protect their land and Pennsylvania’s waterways from environmental threats posed by the Mariner East 2 project.
“Energy Transfer Partners is yet again fabricating charges against my mom in attempt to silence her,” said Ellen’s daughter Elise. “Claims of wild animal baiting are ludicrous. There aren’t even mountain lions anymore in Pennsylvania. ETP are the ones doing the baiting, goading our local authorities with lies to intimidate and abuse my family. Look at who has actually inflicted damage here: ETP has poisoned dozens of families wells across the state, spilled over 100 times, and harassed and intimidated anyone who opposes them.”
Since pipeline construction began on the Gerhart property, Ellen has spent countless hours monitoring and documenting construction activity. Given that ETP has recorded well over 100 spills and contaminated well water of over a dozen families since construction began, Ellen and her family did not trust state regulators to protect their land and water. Ellen has documented dozens of instances of environmental damage to her property during construction thus far. Evidence of sedimentation, spills, improper erosion controls, and more are all available.
This legal bullying adds insult to injury for the Gerhart family, who already have had their land seized and destroyed via eminent domain to enable ETP to build the natural gas liquids pipeline through their property. The Gerharts have never given Sunoco permission to enter their property. 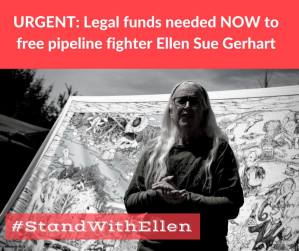 Just spoke with Ellen Sue Gerhart from jail. She is taking her meds and drinking water. Yesterday, a guard told her that she could come out of solitary confinement if she ate. So she ate toast for breakfast, but they did not let her out of solitary. She also saw a doctor and had her vitals taken. Yesterday, the doctor recommended that she have a protein shake so that she can come off her fast without getting sick from eating a meal. Today, the guards said they knew nothing about a protein shake, and won’t give her one. PLEASE CALL Centre County Correctional Facility and direct yourself to MEDICAL. Tell them that Ellen is NOT being given the doctor-recommended protein shake that she needs to safely come off a fast. (814) 355-6794