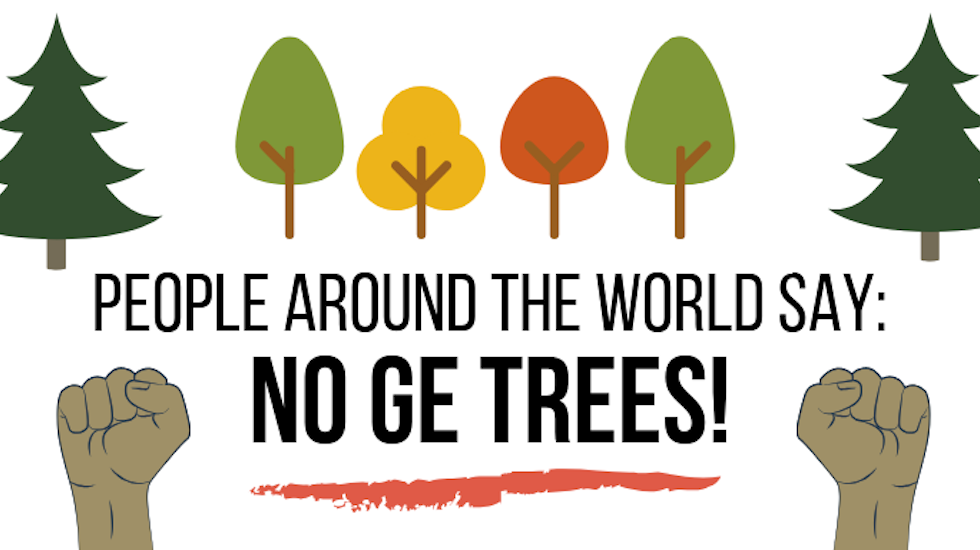 Raleigh, NC (U.S.)–The global Campaign to STOP Genetically Engineered Trees is in Raleigh, NC during the 2019 Tree Biotechnology Conference of the International Union of Forest Research Organizations (IUFRO), to highlight worldwide opposition to the development of genetically engineered trees (GE) trees. The Campaign includes participation by organizations from four continents [1].

“People around the world have risen up in protests over two decades to demand a full rejection of GE trees,” stated Anne Petermann, Coordinator of the Campaign and Executive Director of Global Justice Ecology Project. “Geneticists, farmers, foresters, ecologists, agronomists and other experts have issued declarations against GE trees. Activists have cut down GE tree field trials in several countries. Just between 2015 and 2017 almost half a million people signed onto or submitted letters calling for a full rejection of GE trees around the world. As well, the United Nations warns of the dangers of GE trees [2] and the Forest Stewardship Council bans them from certification [3]. This growing wave of opposition cannot be ignored.”

A 2015 open letter denouncing the large-scale commercial release of GE eucalyptus in Brazil [4] was signed by over 200 Brazilian organizations and experts, and delivered to the Brazilian Biosafety Commission (CTNBio) stating, “serious uncertainties exist with respect to the potential environmental and socio-economic impacts of genetically engineered trees. Unexpected effects have already been reported for GE food crops, including for example the proliferation of herbicide resistant weeds, the emergence of secondary pests decimating crops, altered fertility such as higher rates of outcrossing, as well as increased allergenicity. Given the long and often complex life-cycle of trees and their interaction with biodiversity, predicting the outcomes and impacts of GE trees is practically impossible.”

During an international meeting of organizations, networks, communities and experts against industrial tree plantations and GE trees held in Porto Alegre, Brazil earlier this year [5], Lizzie Díaz from World Rainforest Movement pointed out the reasons for the ongoing resistance to GE trees in Brazil, “GE trees would imply an increase in the use of agrotoxins and water consumption. Genetically engineering of trees only benefit the plantations and pulp and paper industries. For communities living within and nearby plantations, GE trees mean an intensification of the already known negative impacts on land, water, biodiversity, livelihoods and cultures.”

Growing outrage against GE trees has led researchers and corporations to look for new strategies to win public approval, including by arguing that GE trees could be environmentally beneficial for forest health and/or climate mitigation. The problem of ‘social acceptance’ of GE trees will be featured at the IUFRO conference.

“Opposition to genetically engineered trees has led the timber and biotechnology industries to invent new ideas to promote them”, stated Dr. Rachel Smolker, Co-Director of Biofuelwatch and co-author (along with Petermann) of a recent white paper on GE American chestnuts. “They are using a GE version of an American chestnut as a “test tree” to try to convince the public that genetic engineering can be used to improve forest health. But the fact remains that this technology is very young and completely unproven. American chestnuts can live more than two centuries. There is no way to predict the long-term impacts these trees will have on forests, biodiversity or human health. The additional fact that this research has included extensive involvement and financial support by companies like ArborGen and Monsanto that stand to benefit only underscores our concerns.” [6]

“Researchers and industry have good reason to fear public opposition to GE trees,” stated Brenda Jo McManama of the Indigenous Environmental Network. “IEN works with the Cherokee Nation in North Carolina and in 2015 we co-hosted an Indigenous Peoples’ action camp against GE trees in their territory, not far from Raleigh. Indigenous Peoples, not only in the U.S., but in many countries, do not want risky, unproven GE trees on their lands.”

Rural Coalition Research Director, AL Anderson-Lazo, Ph.D. reflected that, “Rural Coalition believes it is important that scientists and the government work together with farmers, ranchers, tribal nations, and rural communities to invest their collective knowledge to understand the ecological and economic risks of introducing genetically engineered trees. Our communities are already confronting the massive impacts of invasive species such as Eastern Red Cedar and the high costs of its mitigation on their farms.” Rural Coalition will receive reports from this IUFRO and will report back information to its membership.

[1] The Campaign to STOP GE Trees includes participation from national and international organizations based in North and South America, Europe, and Australasia. [2] UN Convention on Biological Diversity Decision on GE Trees, COP-8, Bonn, Germany May 2008: “The Conference of the Parties, Recognizing the uncertainties related to the potential environmental and socio-economic impacts, including long term and trans-boundary impacts, of genetically modified trees on global forest biological diversity, as well as on the livelihoods of indigenous and local communities, and given the absence of reliable data and of capacity in some countries to undertake risk assessments and to evaluate those potential impacts, recommends parties to take a precautionary approach when addressing the issue of genetically modified trees.” https://www.cbd.int/decision/cop/default.shtml?id=11033efault.shtm/cop/d [3] Forest Stewardship Council rules on use of Genetically Modified Organisms (GMOs): “FSC’s Principles and Criteria are very clear on the issue of GMOs, excluding their use within the boundaries of FSC-certified forestry operations. The current version 4-0 states unequivocally that “use of genetically modified organisms shall be prohibited”. Criterion 10.4 states: “The Organization shall not use genetically modified organisms in the Management Unit.” [4] The 2015 open letter was delivered by 202 Brazilian organizations and experts to the Brazilian National Technical Biosafety Commission (CTNBio) to express their deep concern and urge the CTNBio not to authorize the commercial release of GE eucalyptus by Suzano/FuturaGene. Despite all the complaints made by social movements and organizations, the H421 eucalyptus was approved. [5] The national meeting in Porto Alegre was organized by World Rainforest Movement, Friends of the Earth Brazil and Global Justice Ecology Project and brought together social movements and organizations, indigenous peoples and Afro-Brazilian Quilombolas representing every state in Brazil impacted by industrial tree plantations and threatened by the commercial release of GE tree plantations. Also at the meeting were representatives from organizations in Chile, Argentina and the U.S.—three other countries threatened by GE tree research and development. [6] For details on scientific concerns of research into genetically engineering the American chestnut tree, as well as financial and research ties between the research and Monsanto, ArborGen, Duke Energy and other corporate consortia, please see the Campaign to STOP GE Trees’ 14 May 2019 Telepress Conference.

← Counterpunch Runs Article on GE American Chestnut as Trojan Horse
GJEP at IUFRO: Blog Posts from the Belly of the Beast →