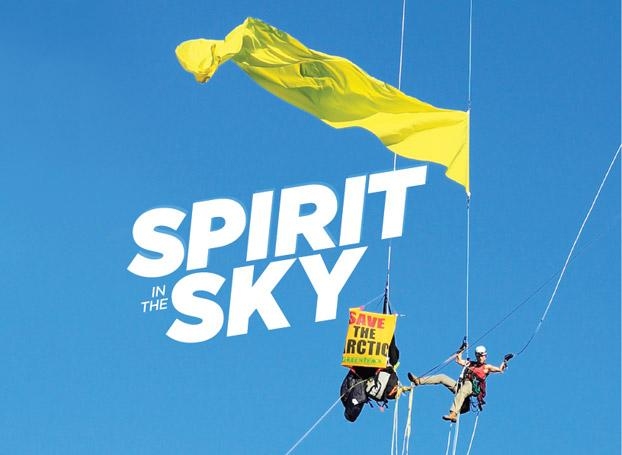 After helping to delay the return of a Shell Oil icebreaker to the Arctic in a newsmaking protest last month, Global Justice Ecology Project’s GE Trees Campaigner Ruddy Turnstone was interviewed for a recent article published in the Willamette Week.

Turnstone was one of 13 Greenpeace protesters who repelled off the side of the St. Johns Bridge, hanging 100 feet in the air above the water for almost 40 hours. Ultimately, Shell’s ship, the Fennica, would complete its journey, but only after a significant delay that drew the attention of international media to the protester’s point of concern — the reckless extrication of fossil fuels from the Arctic and the residual effects on global warming and pollution.

But now, with minutes to go before the activists began their descent from the deck of Portland’s most beautiful bridge, Turnstone could see police cars arriving at the east end of the St. Johns Bridge.

Turnstone and the others were already over the railing.

Above Turnstone, a cloudless night twinkled with stars. Below, the lights of kayaks in the water looked like a reflection of the Milky Way. Police flashlights shone along the bridge.

She took a breath, and plunged into darkness.

She dropped 100 feet. For the next 39 hours, Turnstone and the others dangled in midair—and Portland was held in suspense.