Click to make a secure online gift to GJEP.

Your donation this holiday season will be doubled!

GJEP was proud to sponsor and present at the 3rd International Conference, Paulo Freire: The Global Legacy!

The conference, held virtually from November 29-December 2, 2021, celebrated the world-renowned Brazilian educator, philosopher, social justice advocate, and one of the most pre-eminent educators of the 20th century.

The Paulo Freire Conference brought together educators, academics, students, researchers, and practitioners to reflect on the current status of his pedagogical thought and its application across a wide variety of academic disciplines.

GJEP’s Board member Aziz Choudry, who passed away earlier this year, was greatly influenced by Freire, which you can see in Aziz’s books “Learning Activism”, “Learning from the Ground Up” and other writings. We were proud to be invited to present at this conference.

For more information on the conference visit: https://www.freireconference2021.org

GJEP coordinates the Campaign to STOP GE Trees, a national and international alliance of organizations, scientists, Indigenous Peoples and other individuals that have united towards prohibiting the ecologically and socially devastating release of genetically engineered [GE or genetically modified] trees into the environment.

From the petition: “The importance of FSC’s current prohibition on genetically engineered trees in FSC products is particularly critical given the recent Brazilian approval for commercial growing of a glyphosate-resistant GE eucalyptus tree, developed by the FSC-certified company Suzano. This new decision also shows the need to stop GE tree research by FSC members from moving ahead.”

This petition is crucial and we want to ensure members of the public from every country can make their voices heard.

Sign the petition! Available in English, Spanish and Portuguese.

*To sign on without using the form, email us: info@globaljusticeecology.org. 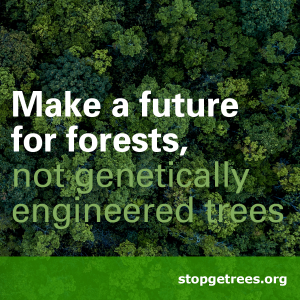 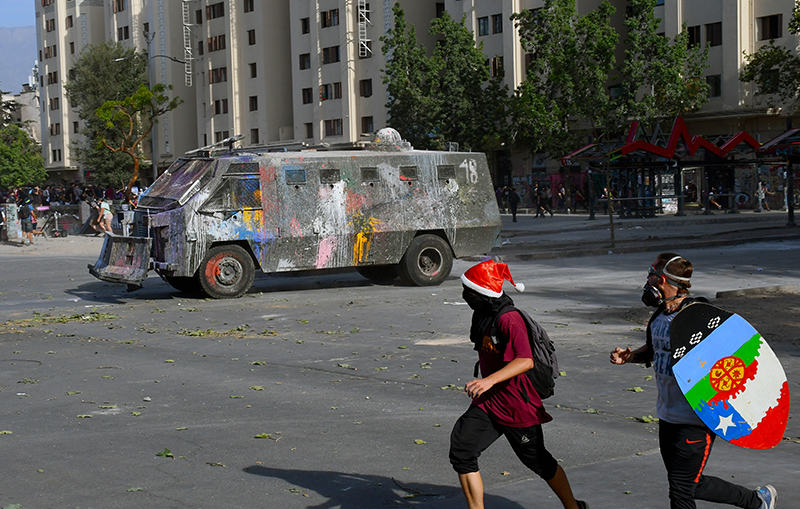 International Human Rights Day – 10 December 2019 Santiago, Chile: Young protesters, one with a Santa hat and the other carrying a shield with the Mapuche flag, run down the avenue as the freshly decorated water cannon searches for protesters. Photo: Langelle/GJEP

GJEP was in Chile in November and December of 2019 during a massive popular uprising against Neoliberalism swept the country.  Millions of people marched and protested in the streets of every major city for weeks on end, and Mapuche people began land re-occupations to re-take lands stolen from them under the Pinochet dictatorship. Following the uprising, which left the streets due to COVID, 80% of the population voted to replace Chile’s existing Constitution, written under the Pinochet regime. This month, Chile is having a major presidential election pitting a young leftist against a neo-fascist with Nazi-connections. So far the race is too close to call.

30 Nov 2021-Miguel Lovera is an agronomist who dedicated his career to plant conservation through activities ranging from scientific and technical research, policy and advocacy, activism and civil service. His main focus is understanding the interface of science and policy. Currently, he is the General Coordinator of Iniciativa Amotocodie, which carries out environmental monitoring in the Paraguayan Chaco together with the Ayoreo People.

12 Nov 2021-Souparna Lahiri, based in India, is the Climate Campaigner and Advisor for Global Forest Coalition, an international coalition of NGOs and Indigenous Peoples Organizations defending social justice and the rights of forest peoples in forest policies. 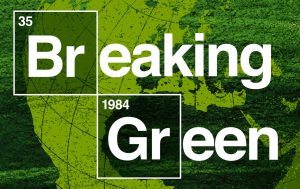 Nov 2021-Cassandra, a member of GJEP’s board of directors discusses whale offsets promoted at COP26. As many nations promise so-called net-zero emissions, whales are being looked at to provide carbon offsets to avoid reducing CO2 emissions at the source.

Dr. Michael Dorsey on IPCC’s Code Red for Humanity – Will we act?

You can find all podcast episodes here: https://globaljusticeecology.org/breakinggreen/

Global Day of Action Against UN Conference of Polluters (COP) in Durban 10 Years Later: A Photo Essay by Orin Langelle and Anne Petermann

25 Nov 2021–This photo essay by Orin Langelle documents the attack by Chilean National Police on two Mapuche communities that were re-occupying their ancestral lands, stolen from them under the Pinochet dictatorship. GJEP was in Chile documenting the Peoples’ Uprising.

17 Nov 2021-On this day in 1993, the Indigenous-led Zapatista Army of National Liberation (EZLN) was formed. Six weeks later, on New Year’s Day 1994, the Zapatistas rose up against the North American Free Trade Agreement (NAFTA), which they called a “death sentence” to the Indigenous Peoples of Mexico.

When GJEP identifies a group or organization whose non-for-profit work closely aligns with our mission, we may support their important work by becoming a fiscal sponsor. This helps them minimize bureaucracy so they can focus on their crucial work for ecological and social justice, forest protection and/or human rights. GJEP fiscally sponsors BiofuelWatch, Vermont Street Medics, Save the Pine Barrens, NH PANTHER, A Center for Grassroots Organizing, REDD-Monitor, the Paulo Freire Conference, and Standing Trees VT.

Click to make a secure online gift to GJEP.

Your donation this holiday season will be doubled!