Global Justice Ecology Project has a lot of exciting news and upcoming events to share. First and foremost, this September 14-15, GJEP celebrates its 15th Anniversary. The two-day party includes the opening for a new exhibit at our ¡Buen Vivir! Gallery and a private showing of a new film co-produced by our own Ruddy Turnstone. Also below are reports from the fight against the Atlantic Coast Pipeline, a special link to the June-July Bulletin from our partners at World Rainforest Movement, and a new op-ed on genetically engineered trees.

To get quarterly updates like this and other important info sent directly to your email box, sign up here.

Orin Langelle and Anne Petermann co-founded GJEP in 2003 to work with allies all over the world to expose and address the root causes of social, ecological and economic injustice. This September we celebrate our 15th Anniversary. Thanks to all of you who have supported us over the years and made our accomplishments possible. Thanks also to The Ceres Trust, FireDoll Foundation, New Visions Foundation, Patagonia, Inc. and our other funders for their ongoing support.
Keep an eye out for our summer survey. We want to hear your ideas about GJEP!

New Exhibit – One World: Issues Across and Through Skins (part of GJEP’s 15th Anniversary) 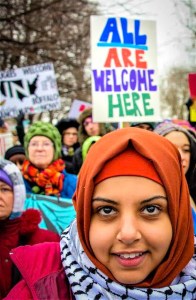 Premier Solo Exhibit by: Johanna C. Dominguez
Opens: Friday, September 14, 6 p.m.- 9 p.m. with a wine and hors d‘oeuvres reception ¡Buen Vivir! Gallery for Contemporary Art – 148 Elmwood Avenue – Buffalo, NY
About the show: Johanna Dominguez has documented many rallies and efforts of activists across Western New York. She combines these with images taken abroad to bring together this exhibit. There are many threats facing both people and the Earth, and One World: Issues Across & Through Skins shows that the world is a lot smaller than we think, while documenting positive efforts to make a space for life in that small world.
The ¡Buen Vivir! Gallery for Contemporary Art
is part of GJEP’s Global Justice Media Program

Private Showing: A Story of a Forest 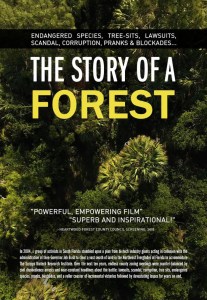 The Story of a Forest is a half hour documentary of the ten-plus year campaign that started in 2004 to stop the development of a Scripps Biotech campus in the middle of Florida’s biodiverse Briger forest. The film features tree sits, lawsuits, blockades and pranks to save the forest, as well as the fight against political corruption, all the way to Jeb Bush. The Story of a Forest is about a local campaign that exemplified the threats of corporate globalization worldwide, and reflects the deep analysis of the global justice movement that swept the world in the early 2000s. 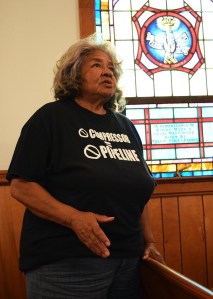 Ruby Laury, left, speaks at the Union Hill Baptist Church against the Atlantic Coast Pipeline and a 55,000 horsepower compressor station planned by Dominion Energy in the Union Hill community. There are freedmen cemeteries and unmarked slave burials on or near the site where Dominion wants to build its compressor station.
If completed, the 604 mile pipeline would cross Virginia, West Virginia and eastern North Carolina as well as National Forests. It would destroy more than 4500 acres of forested land, cross more than 1500 water bodies, and seize private lands through eminent domain.
GJEP co-Founder Orin Langelle is working with the Union Hill community and Friends of Buckingham County to expose the racial and ecological injustices the pipeline would bring.
Above Photo: Orin Langelle
Watch the video below for more on the pipeline’s impacts

And as always, visit the stopgetrees.org page for the latest in the struggle to protect forests and communities from the risks and dangers posed by genetically engineered trees

GMO Chestnuts in Chestnut Ridge Park? This Op-Ed, written by GJEP Executive Director Anne Petermann was published in The Public, a local weekly paper in Buffalo, NY in response to articles in the Buffalo News extolling the virtues of using GE…