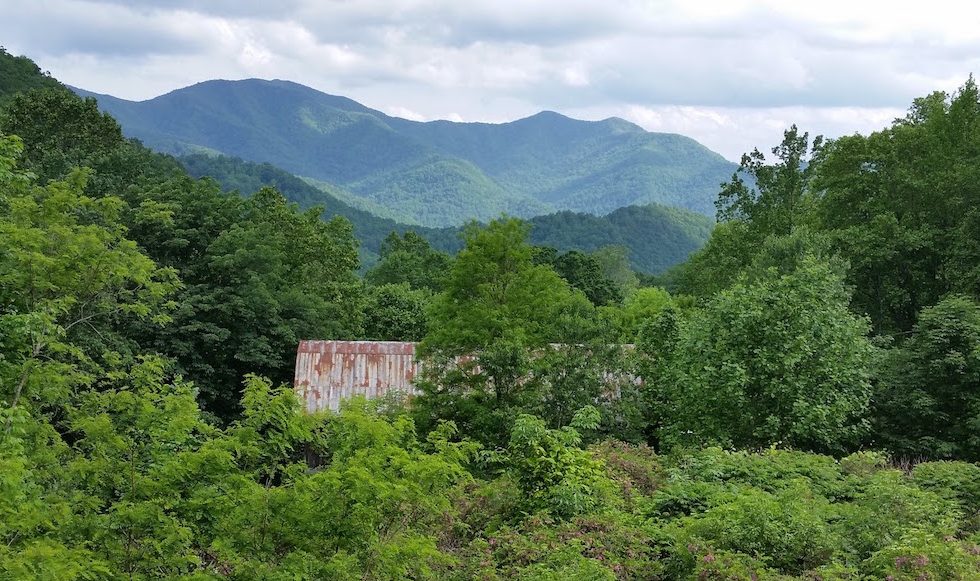 Forests and communities across the Eastern US would be threatened if researchers win US government approval to release GE trees into them. Photo: Petermann

Get involved and learn about the campaign to protect forests and communities from the threats of genetically engineered trees:

Find information on the problems of GE trees along with ways to get involved in the effort protect forests from GE trees on our website devoted to the issue, and in our 2019 white paper “Biotechnology for Forest Health?”

Sign the petition to the US Department of Agriculture calling on them to protect forests from GE trees.

You can also read the press release and resignation letter from American Chestnut Foundation Board Members Lois Breault-Melican and Denis Melican, protesting the ACF support for genetically engineering the chestnut.

Read below for the full response by Global Justice Ecology Project to the New York Times Magazine article “Can Genetic Engineering Bring Back the American Chestnut?” by Gabriel Popkin.

An article printed in the 3 May 2020 New York Times Magazine, “Can Genetic Engineering Bring Back the American Chestnut?” by Gabriel Popkin, was a disappointing piece of questionable journalism.

In this post, I highlight and challenge some of the most egregious statements in the article and question its advocacy for the idea that humans can and should use technology to “improve” nature.

Note: Global Justice Ecology Project and our co-founders launched the first campaign to protect forests and communities from the risks of GE trees twenty years ago. Since then, the campaign has expanded globally and GJEP and other campaign members have testified at UN meetings, industry conferences and rural community workshops on five continents. Our advocacy and organizing to expose the potential dangers of GE trees led to a decision by the UN Convention on Biological Diversity warning countries of the risks of GE trees, as well as decisions by forest certification regimes like the FSC to prohibit the use of GE trees.

Early on, the author conducted extensive interviews with GJEP on the problem of GE trees, as well as with others we recommended who could provide critical viewpoints. We also sent him the heavily researched White Paper co-written by experts, scientists and others from GJEP, Biofuelwatch and elsewhere. The report “Biotechnology for Forest Health: The Test Case for the Genetically Engineered American Chestnut” details the science behind the GE American chestnut, the risks it poses, the actors promoting it and their ulterior motives, and the greater problem of forest health.

Despite all of this information, Popkin’s article glosses over any criticism, using out of context quotes and ignoring scientific arguments. GJEP is dismissed as an “anti-genetic engineering group” despite our mission for social & ecological justice, and decades of work in defense of forests and the rights of Indigenous Peoples. It is this focus, in fact, that led us to found the campaign to expose and address the social and ecological threats posed by genetically engineered trees.

[All use of bold for emphasis is mine.]

If approved, the precedent for forest ecosystems would be devastating. The GE American chestnut would be the first-ever genetically engineered tree approved for unregulated distribution in the US, opening the floodgates to other GE trees. It would also be the first-ever intentional release of a fertile genetically engineered or genetically modified organism (GMO) into wild ecosystems, opening the door to other uncontrollable GMO releases.

The author lays bare his bias when he challenges GE tree opponents to embrace engineering as the best way to “repair the natural world.”

Popkin states, “The geneticists’ research forces conservationists to confront, in a new and sometimes discomfiting way, the prospect that repairing the natural world does not necessarily mean returning to an unblemished Eden. It may instead mean embracing a role that we’ve already assumed: engineers of everything, including nature.”

In truth, however, one cannot use genetically engineered trees to restore forests. The GE American chestnut has never before existed in forests. We cannot “restore” forest ecosystems with an alien species.

In addition, while engineers claim their GE tree will resist a deadly introduced blight, it was not merely the chestnut blight that decimated the chestnuts in the Twentieth Century. Vast expanses of the mighty trees were felled by the saw.

Popkin writes, “Chestnut trees could rise to 120 feet, with as much as the first 50 feet uninterrupted by branches or knots — a lumberman’s dream. While neither the most beautiful nor the strongest wood, it grew fast, especially when resprouting after being cut, and did not rot. As railroad ties and telephone poles, where durability trumped aesthetics, chestnut helped build industrial America. Thousands of barns, cabins and churches made of chestnut still stand; one author in 1915 estimated that it was America’s single-most-cut tree species.” He added, “By 1940… Billions of today’s dollars in value had been wiped out.”

The prospect of these “billions in profits” may explain the interest and/or support for the GE American chestnut expressed by myriad timber and biotechnology companies. Our research has revealed direct or indirect involvement by Weyerhaueser, International Paper, MeadWestvaco, ArborGen, Monsanto (now Bayer) and Duke Energy, who also value the GE chestnut for its use as a “test tree.” They hope the tree will sway public opinion toward supporting the use of biotechnology for forest conservation, and to pave the way for the introduction of other GE trees meant for industrial timber plantations.

This industry desire to use the GE American chestnut as a charismatic test tree is evidenced by the extensive corporate funding and backing for Powell’s research. We analyzed Powell’s own annual reports and found that, between 2008 and 2017, Powell received over 40% of his funding from corporations or corporate consortia. Another 22% came from the USDA–the agency tasked with assessing the safety of the GE chestnut, 27% came from the American Chestnut Foundation or its New York chapter (each with a wide array of corporate partners), and a mere 3% came from the general public (8% came from other sources).

GE tree company ArborGen and Monsanto (now Bayer) have been most directly involved, providing financial and technical assistance. Even now, as Popkin points out, John Dougherty, a retired Monsanto scientist, is consulting for Powell on a pro bono basis.

People strongly oppose GE trees for many reasons, and Monsanto’s historic involvement is one of them. Most recently, Monsanto has been exposed for hiding the toxicity of their herbicide RoundUp, which has led to a class-action lawsuit representing people who used the toxic chemical and now have certain linked cancers.

And importantly, people oppose GE trees because they love forests. Already forests are threatened by unsustainable logging, invasive species and introduced pests and pathogens, urban sprawl, and the escalating impacts of climate change. Adding the risks of GE trees to the mix is foolhardy.

There is no way to assess the long-term risks to complex and intricate forests ecosystems of genetically engineering trees that can live two centuries. How GE trees will impact forests, water, songbirds, wildlife, insects or even human health is unknown.

Popkin fortifies these concerns with a detailed description of the process used to develop the GE chestnut trees:

“The process begins with the selection of embryos that bud from genetically identical cells and inserting the wheat gene. The embryos, which resemble tiny clusters of pale, translucent grapes, live in agar, a puddinglike substance derived from algae, in petri dishes. To turn the embryos into trees, the researchers add growth hormones. A rack of shelves under intense fluorescent bulbs holds hundreds of cube-shaped plastic containers with miniature, rootless chestnut trees. Eventually the scientists apply rooting hormones, plant their proto-trees in pots with soil and place them in temperature-controlled growth chambers.”

The logic of the article’s GE tree proponents is also revealing. In one case, Gary Lovett, a forest ecologist at the Cary Institute of Ecosystem Studies in Millbrook, N.Y. is quoted using the bizarre argument that the GE chestnut is okay because he believes it won’t be as bad as other invasive species. “We’re introducing new whole organisms all the time. [The transgenic chestnut] would have less of an impact than that.”

In spite of all of the detailed scientific research we shared with Popkin, he chose to quote Bill Powell saying of GE skeptics, “They don’t base anything on science.” This is a tired old line by Powell that he trots out at any opportunity in spite of his knowledge of our science-based arguments. That Popkin used this quote despite its ‘truthiness’ clearly exposes his own bias.

Powell’s bias is obvious. His entire career, and some say his ego, is wrapped up in getting this GE tree approved.

Powell is an engineer. He did not grow up in forests, he grew up on army bases—about as far from nature as you can get. In exploring Powell’s mechanistic view of nature, Popkin writes, “Nobody complains when engineers produce better cars, or smartphones, so [Powell] wants to know what’s wrong with engineering a better tree.”

Logically, then, if Powell does not understand the fundamental difference between tinkering with the design of a car and engineering a living tree, then he probably will never understand the risks posed by planting novel transgenic GE trees in living, breathing forests of immense complexity.

In fact, it seems Powell and his team are unconcerned with what happens to the tree when it leaves the lab.

In a presentation about the GE American chestnut I attended at North Carolina State University in April 2018, Powell’s lead assistant researcher Andy Newhouse was asked, “In looking at ecological long-term risks, is the potential for GE American chestnuts to transform eastern forests being considered?” his reply was, “restoration is not the responsibility of the researchers.”

Who, then, is responsible for the consequences of releasing this GE tree into our forests?

You can download our 42 page white paper, “Biotechnology for Forest Health: The Test Case for the Genetically Engineered American Chestnut” or our 2 page Executive Summary for more information on the science behind the GE American chestnut, the risks it poses, the actors promoting it and their ulterior motives, and the greater problem of forest health.

Please also see the post “GE American Chestnut is Trojan Horse bound to Fail” by biologist Dr. Rachel Smolker, co-author of the white paper who also wrote a response to the Popkin article.  Her response describes a whole other set of arguments to oppose the GE chestnut for so-called “forest restoration.”