Journal from GJEP GE Trees Campaigner Ruddy Turnstone, from her home base in Lake Worth, FL, where she rode out the Hurricane. (all photos by Ruddy Turnstone)

September 13th: Today I was just outside of BJ’s waiting for them to open so I could get ice and luckily I did get it, rationed out to 2 bags a persyn. Almost finished going through our fridge items to throw in the giant cooler. Everything else is rotted from the heat.

Took most of the day today to try and fix the generator at our house to no avail. I had to pile up tree debris that broke and fix some bent over trees in our yard. The three employees I saw at the gym this morning (its amazing how quickly eating all those preservatives get to you) also still do not have power.

Slowly things are coming back on line, a traffic light here or there is now working, more and more

stores are getting shipments of items, but shelves are still bare of many things, mostly the essentials to survive in this city without much electricity. I’m so thankful that we have a giant cooler, and things like a small backup battery to charge our cell phones, and of course a house that is still standing.

The Florida Keys have been hit very hard. Some homes had walls completely collapsed and roofs just laid flat on top. We have heard that many people from the Florida Keys Environmental Coalition are safe, but rescue missions are still underway, as many people did not evacuate. Many like Standing Rock water protector and former political prisoner Katie “Krow” Klothe are  waiting to hear from their relatives who did not evacuate the keys. People are being neighborly and supporting each other which is a good sign, but the generators running throughout the city makes the humid air here even thicker with exhaust. 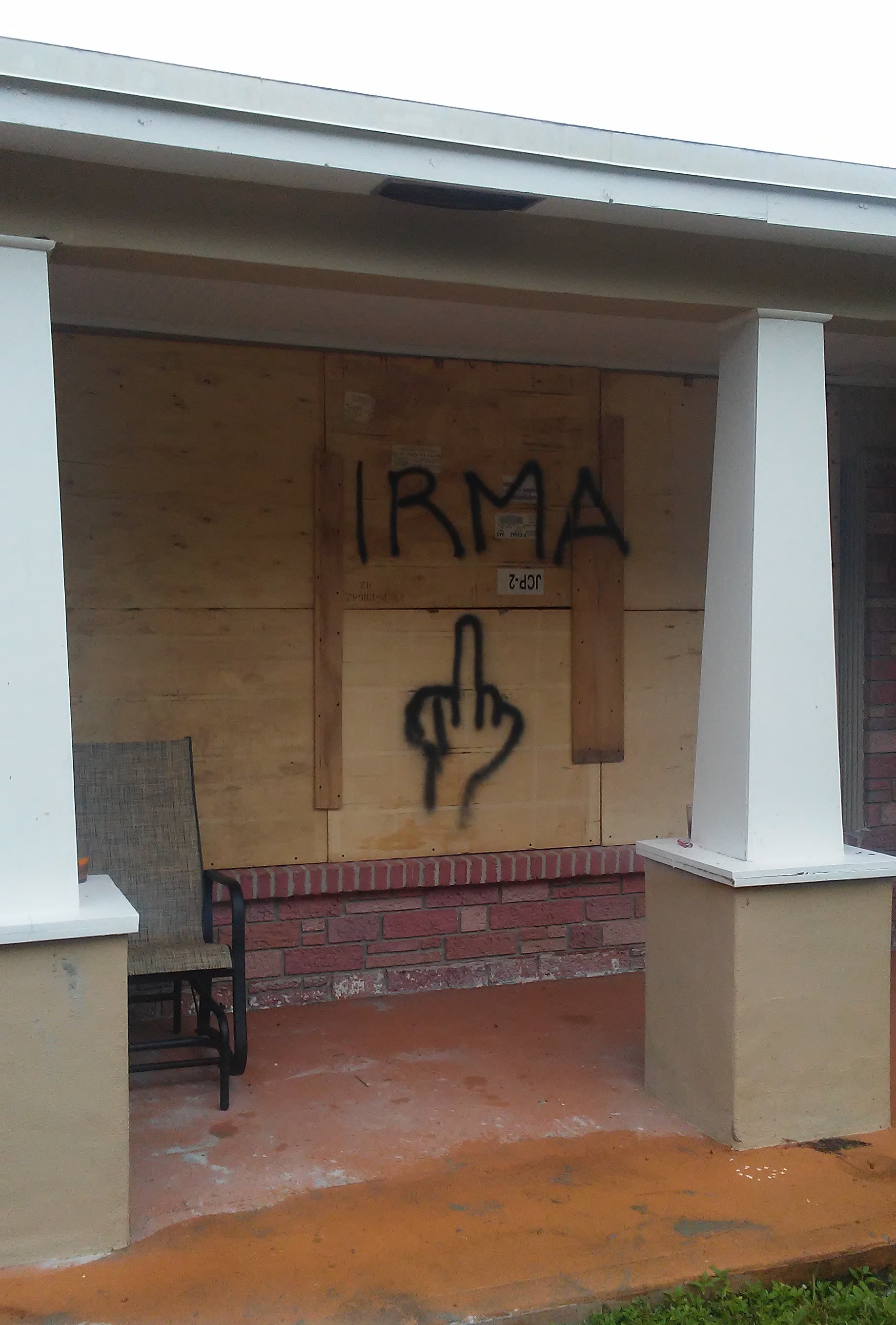 This curfew imposed on us is a total waste of people’s time and resources. Police have arrested over 100 people in Palm Beach County, over half of them just for breaking curfew. The police state is rampant. Curfew on Tuesday was from 10PM-6AM. Monday Dawn till Dusk. On Saturday it was 3PM. I’ve learned that curfews obstruct capitalism as well as individual freedom (that part I knew). I had to break curfew last night just to be able to have my phone charged enough so I could send this email. During the day cops are pretty much just staring at migrant workers and arresting people for BS, instead of ..oh I dunno…helping guide traffic? Helping people?

Prior to Hurricane Irma, the city of Lake Worth decided to fine people for putting trash and yard debris out on the streets before the hurricane instead of helping people figure out what to do with all of their trash/debris. This is what a conservative-money hungry-doesn’t care about the residents-city commission looks like.

But, we don’t have raw sewage running in front of our apartments like they do in Hollywood, which according to Bloomberg is Irma’s main pollutant. Washington Post reports that we have millions of gallons of sewage bubbling up all over the state. In Immokalee, many migrant workers lost homes and the streets are severely flooded.

People still need a lot of help in various ways, throughout the state, ways that you wouldn’t even think of. In the dead middle of the hurricane at its peak here in Lake Worth, my neighbor asked for our car charger. His friends needed it to give their baby a nebulizer for its bronchitis. So they did that in their car, winds howling, with the charger I ran out and got to them. Its a weird intense world and I’m very freaked out about the two nuclear reactors we have north and south of us, Turkey Point in Miami being the worst violator of Nuclear Regulatory Commission standards out of any other nuclear power plant in the county.

Community support is critical at this time here in Lake Worth. Food Not Bombs and Migra Watch are sharing food for free twice a day. Many of the folks in need are migrant workers who were not getting picked up for work, were still without power or both. Folks from the Guatemala-Maya Center are donating ice to mobile home communities, especially to the elderly. As I biked around, I could 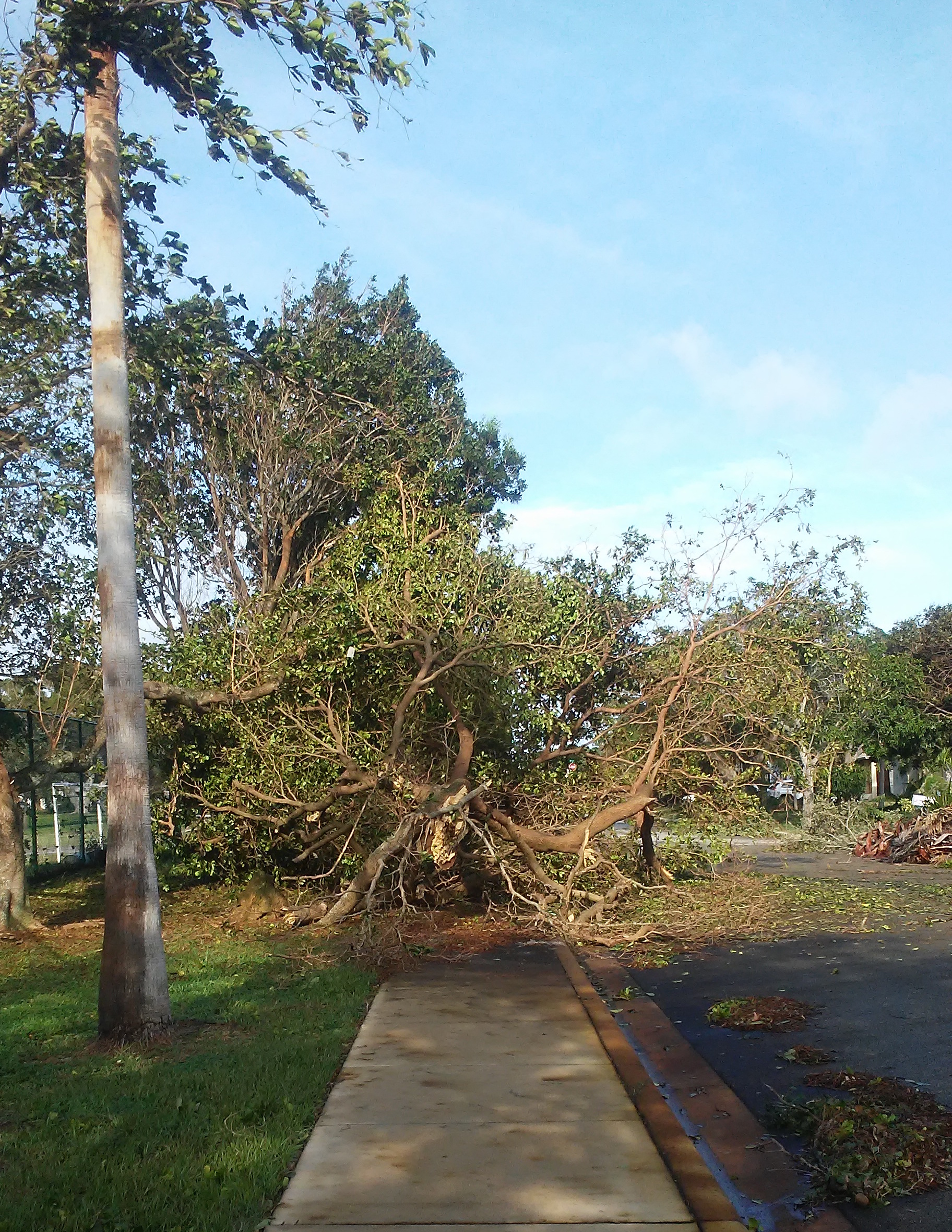 see extension cords crossing from one house to another, sometimes crossing the street to share the electricity. This picture of a giant downed tree is at the park less than a block from my house. This is also what the park from my house looks like in addition to downed power lines.

Our cell phones don’t work really well in parts like ours that don’t have power. I have difficulty loading a single web page and my friends have difficulty getting text messages or using apps. The theory going around is that we are overloading the cell phone network because we have no Wi-Fi, but all I know is, when I am in an area that has power, everything on my phone works at conventional speed. Our phones just could not hack it with the strain we were putting on the network, so many of us didn’t get messages till the next day if at all. All I can say for sure is that cell phone coverage was lost throughout much of the state due to power outages and inability to refuel generators due to downed trees and debris. It just took 25% of my cell phone life to send these emails so I gotta put this back on the battery pack and get my final tasks done.

Friday September 15th: I’m sitting at the airport now on Friday, and even this place is still affected. We just had two power outages, and its not clear if we are now getting power from Florida Power and Light’s main grid or a back-up generator. Shipments of basic things are delayed all over the state, from auto parts to restaurant supplies, grocery and hardware stores, business-as-usual is completely disrupted for those of us that have it easier, and others are seriously suffering from damage to their homes, while others are dying from the heat, lack of access to ice, fresh water, medication, not to mention those that still need rescuing. Please if you can, take a moment to donate to relief efforts to local organizations doing on the ground work.  Oh and P.S., we still have no electricity.

Please click here to donate to the Coalition of Immokalee workers – migrant farm workers who are on the ground serving their community. A list of supplies they need is below: