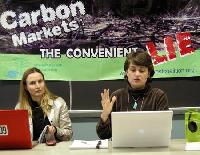 Corporate vs. Popular Solutions to the Climate Crisis
Climate Change: Crisis and Opportunity

Global warming is humanity’s greatest challenge.  As such, we must tackle this issue on several fronts.  We must build opposition to the corporate-controlled false solutions to climate change that dominates the media, in order to open space for discussion of real solutions.  We must make climate justice a core part of our work.  We must make broad and visionary alliances with allied movements around the world, and we must begin the fundamental transformation of society that will be required to truly and effectively address the climate crisis.

Global Warming = Global WarGrowing human population coupled with gross overconsumption in Developed Countries has culminated in a severely shrinking resource base, as evidenced by pandemic ecological crises and by global warming itself.  The intensification of the impacts from climate change is further depleting resources such as water and soils, and threatens widespread destruction of forests and their biodiversity.  Wars for resources have already begun.  In February 2004, a Pentagon report on global warming was leaked.  It predicted that abrupt climate change could bring the planet to the edge of anarchy as countries develop a nuclear threat to defend and secure dwindling food, water and energy supplies.  They went on to say that the threat to global security vastly eclipses that of terrorism, concluding, “disruption and conflict will be endemic features of life.  Once again warfare would define human life.”  In 1980 Jimmy Carter pronounced the Carter Doctrine that enables the US to go to whatever lengths are necessary to ensure an uninterrupted supply of oil from the Middle East.Then there is the role of the World Bank, which is currently headed up by former US Trade Representative Robert Zoellick.  Zoellick was one of the main architects of NAFTA (the North American Free Trade Agreement) and is one of the people behind the Project for a New American Century, the neoconservative blueprint for American Empire.  The World Bank is one of the primary engines of global warming.  According to the Sustainable Energy and Economy Network, since the 1992 Rio Earth Summit, when the World Bank was entrusted with promoting and developing renewable energies, they have spent well over $30 billion on fossil fuel exploitation (over 7 times what they spent on renewables).  And where are these fossil fuels going?  Over 80% of them are being exported to G8 countries.  The World Bank has now insinuated itself into the global effort to stave off climate change by assuming the role of the world’s carbon trading broker (and netting a tidy sum for itself in the form of a 13% trading commission).  Hence the World Bank is a global funder of climate change at the same time that it is a central player in the promotion and implementation of massive-scale, market-based false solutions including carbon trading, carbon offsets like monoculture tree plantations, incinerators, large-scale hydropower and biofuels (more appropriately named agrofuels).Some of the most extreme examples of the capitalist climate denial: With the spectre of climate catastrophe looming, fossil fuels companies are developing the tar sands in Alberta, Canada where they plan to destroy a tract of boreal forest the size of Florida to access the tar sands beneath.  Extracting the fuel from the tarsands is very energy intensive and it takes about 2 gallons of fossil fuels to access 3 gallons of fuel from the tar sands.As a second absurd example, at the same time that scientists and arctic peoples are raising increasingly urgent alarms about the melting of the arctic regions due to global warming and excessive carbon emissions, oil companies are competing to claim the vast oil reserves that lie beneath the melting arctic, while at the same time celebrating the opening of the Northwest Passage and new trade routes.  The logical disconnect displayed here is frightening and exemplifies the disaster capitalism approach to climate change.Disaster Capitalism and Climate ChangeThe disaster capitalists are seizing on global warming as the newest means to:

Among the various profit-making false solutions to climate change being promoted by the disaster capitalists, agrofuels are one of the more egregious examples.  First came agrofuels manufactured out of food crops like corn.  These food-based fuels were quickly and loudly denounced for their obvious impacts on the world food supply.  But besides making food scarcer and more expensive, thereby driving up rates of starvation, agrofuels made from feedstocks like corn were also shown in studies to use more fossil fuels to create than the agrofuels that were produced, causing a negative impact on the climate.  They also had nasty side effects.  The diversion of corn in the U.S. into agrofuels led to record prices for the crop.  This in turn caused many soy farmers in the U.S. to change over to corn.  This was followed by a dip in the soybean market which drove up the price of soy, leading to a rapid acceleration of deforestation in the Amazon rainforest for the expansion of soy monocultures in Brazil.The solution, we are now told, is second generation biofuel technologies that do not use food feedstocks, but rather cellulose-based feedstocks, such as trees and switchgrass.  These, too, however are solely about corporate profit, not about truly sustainable fuels.  First of all, cellulosic agrofuels do nothing to address the question of land being redirected out of producing food and into producing fuel crops.  Second, agrofuels are being used to promote new and unproven technologies such as the highly controversial and dangerous genetic engineering of trees.  GE trees are one of the main feedstocks being promoted for the manufacture of cellulosic ethanol.  GE trees, (which, incidentally, are also being proposed for carbon offset forestry plantations), threaten to contaminate native forests and indigenous lands with engineered pollen and seeds, leading to devastating and irreversible impacts on forests, wildlife and nearby human communities.  Corporations such as International Paper, MeadWestvaco, ArborGen and others stand to profit handsomely from the commercialization of GE trees.Eliminating these corporate-controlled false solutions to global warming is critical to make room for the real, community-controlled solutions to global warming.In addition to working against false solutions, we must also work for climate justice.

Indigenous and rural peoples, women and the poor are already on the front lines of the climate struggle, being impacted most severely by climate change.  The UN estimates that between 1995-2005 over 500,000 people in so-called developing countries were killed as a result of climate change while another 2.5 million were directly impacted by it.  Because in many regions indigenous peoples have been careful stewards of their ancestral lands, these lands are now being coveted by the World Bank, corporations, governments and others that seek to take control of these lands: for the rich resources they contain; for the development of agrofuel feedstocks or monoculture tree plantation carbon sinks; and now also for the important role they can play in carbon offsetting schemes under the World Bank’s Forest Carbon Partnership Facility, or under the UN’s Reducing Emissions from Deforestation scheme.  Both of these schemes seek to take control of regions with intact forests and protect them as human exclusion zones by relocating resident communities so that the carbon absorbed by these forests can be used to offset the emissions of polluters in the North.  This environmental protection = human exclusion model has been perfected over the years by the likes of Conservation International, the World Wildlife Fund and the Nature Conservancy.  In fact, at the World Bank’s press conference during the UN Climate Convention in Bali where Zoellick first announced the Bank’s Forest Carbon Partnership Facility, The Nature Conservancy pledged $5 million to the effort.However, as one of the steps toward truly addressing climate change, Indigenous peoples must be given autonomy and the right to control their ancestral lands.

Because of the inherent injustice of REDD and the FCPF, indigenous peoples were joined by people from around the world to stage a loud and angry protest outside of Zoellick’s press conference in Bali.  This was, in fact, the most hopeful thing that emerged from the Bali talks where once again the US bullied the rest of the world into accepting “The Bali Roadmap”–a deal with no hard targets for emissions reductions, but rather a vague agreement to talk about potential action on climate change at future meetings.

Social movements, indigenous peoples organizations and NGOs came together numerous times throughout the UN Climate Convention in Bali to demand real action on climate change, oppose false solutions and to stand up for climate justice.  Out of these actions emerged a new international alliance called Climate Justice Now!

balippt.pdfOne challenge for the international climate change movement is upping the ante sufficiently over the next two years to force the international climate negotiations to take real, effective action to address global warming.  In the UN arena, all eyes are focused toward a new post-Kyoto Protocol agreement to take effect in 2012, when the Kyoto Protocol expires.  The negotiations for this post-2012 framework are happening now.  They hope to finalize the terms for this agreement in Copenhagen during the UN Climate Convention there in December 2009.  This means that the international climate movement needs to ramp up its militancy to force the negotiators to include action steps that are truly meaningful and not controlled by corporate interests.  As the London Guardian pointed out after the UN climate negotiations in 2000, “what has been singularly lacking [in the climate change debate] has been any widesprad popular campaign.  There have been no Seattle-style protests…  Politicians respond to pressure.  When they have big, angry demonstrations outside their conference centers, it focuses their minds…”Key role of the US movement against climate changeThe movement against global warming in the United States plays a pivotal role in the global effort to stop climate change.  This is for a few reasons:

In much the same way that the Seattle protests bolstered the position of the underdog countries in the WTO negotiations, ultimately derailing them, a US mobilization in support of countries fighting for real action on climate change at the international level could help neutralize the obstructive role of the US by demonstrating that even the country’s own citizens do not support the government’s intransigence on this issue.The global warming crisis opens the door to the fundamental transformation of society toward which the left has been working for countless years.  While raising the militancy of the movement toward international climate negotiations is a crucial component of forward motion on climate change, we must also take lessons from the social movements around the world that are already taking direct action on issues related to climate change.  Indigenous peoples in Brazil are taking back their ancestral lands, cutting the eucalyptus plantations and re-establishing villages.  A few days ago 900 women from Via Campesina occupied a eucalyptus plantation and cut down the trees.  800 women and children were violently arrested.  Social movements based on small island nations in the Pacific are struggling for the very survival of their peoples.  The US climate movement must project these voices and stand in solidarity with them.  The model of community action at the local level is a key part of the solution to climate change.Let’s be clear, we cannot buy our way out of this crisis.  Consuming more stuff, even energy efficient stuff, is not the answer.  This still requires fossil fuels to mine the resources for the stuff, to manufacture the stuff and to transport the stuff.An issue as comprehensive and wide-reaching as global warming, however, does offer us the critically important opportunity to identify and address its root causes, which are the same root causes of social injustice, economic domination and environmental destruction. The myriad solutions to global warming will come, not from the top down, but from communities identifying locally appropriate sustainable solutions that are both decentralized and recognize the importance of local control and bioregional distinctions.This is the future toward which we are working.  We urge you to join us.GJEP Co-Director Orin Langelle contributed to this presentation.