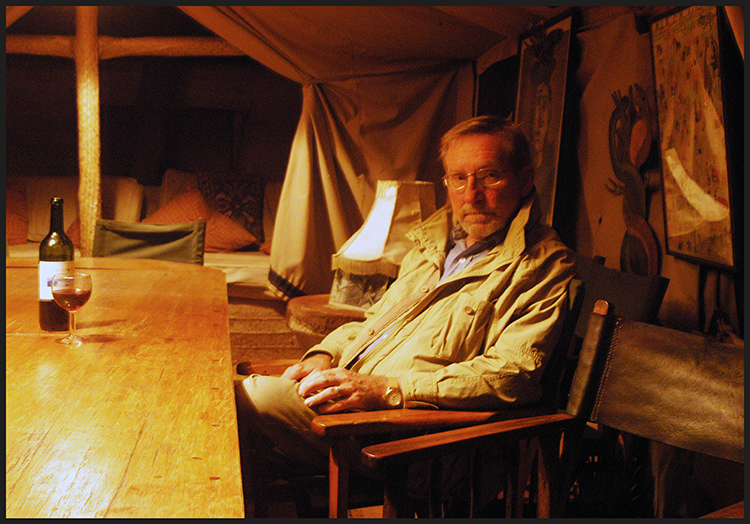 The photography of Global Justice Ecology Project co-founder and photojournalist Orin Langelle is being featured in events in the New York City area and Toronto.

Seven photographs from Orin Langelle’s last exhibit, The End of the Game – The Last Word from Paradise, Revisited are included in a show at the Gordon Parks Foundation Gallery in Pleasantville, NY. Langelle’s photos document Peter Beard’s first one-person show at the International Center of Photography in Manhattan in 1977.

The exhibit at the Parks Foundation, Gordon Parks: Collages by Peter Beard, features artwork made by Beard [1] over the course of the long friendship between him and Parks [2].

The exhibit opened Monday, January 18, Martin Luther King Jr. Day in commemoration of the significant achievements of Gordon Parks in breaking down racial barriers in the arts [3]. An Artists’ Reception, featuring Beard and Langelle was planned for Friday, January 22, but was postponed due to the snowstorm projected to hit the New York City area this weekend. [4] The exhibit runs through April 23.

On January 31, Langelle spoke in Toronto to a packed house at a launch for the book Learning Activism written by Aziz Choudry, a professor at McGill University. The cover of the book features a photo by Langelle and the book is illustrated throughout with Langelle’s photos.

Langelle is the founder and Director of the Allentown-based ¡Buen Vivir! Gallery in Buffalo and has more than four decades of work spanning six continents.

The ¡Buen Vivir! Gallery is located at 148 Elmwood Avenue in Buffalo, NY. The gallery’s next show, Climate Change, System Change, Personal Change opens with a First Friday reception on March 4. This multi-faceted show with two separate but interrelated exhibits, Climate Change-Realities and Resistance and Black on the Ground, White in the Air, intends to explore the underlying systemic causes of the climate crisis, including its deep connections to racism, classism and environmental destruction.

[1] Peter Beard is best known for his work photographing the devastating impacts of failed conservation models that led to the demise of tens of thousands of elephants in Kenya in the 1960s and 1970s.  His groundbreaking book on the topic, The End of the Game, was just released in its 50th Anniversary edition. [2] Gordon Parks (November 30, 1912 – March 7, 2006) Biography. [3] On MLK Jr. Day this year, Turner Classic Movies showed Park’s first movie, The Learning Tree. It was the first major Hollywood movie ever produced by an African American. Parks also wrote the book it was based on, directed it and scored the music. Turner Classic Movies added that being first in something was not new to Parks as he was the first black photographer hired by Life Magazine almost 25 years prior to the movie’s release. [4] The Artists Reception will be rescheduled for a later date in the Spring of 2016.
print