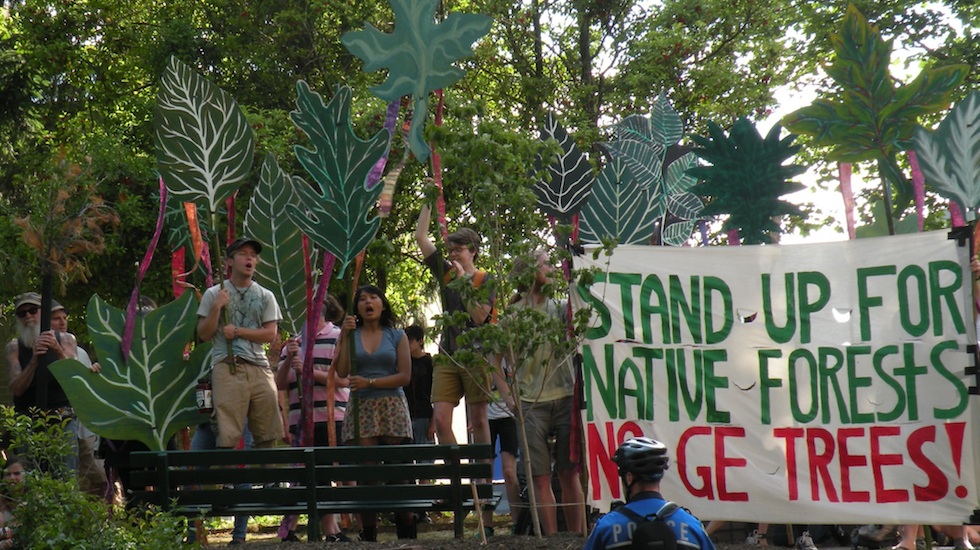 New York – Scientists, Indigenous Peoples, ecologists and a network of organizations [1] are raising alarms about efforts by researchers at the State University of New York College of Environmental Science and Forestry (ESF) to win legal approval for genetically engineered (GE) American chestnut trees developed to resist a deadly blight [2]. These GE trees are being promoted despite growing public concern about and opposition to the genetic engineering of trees.

If approved, it would be the first GE forest tree legalized in the US. It would also be the first GMO approved for release in the wild with the intention of spreading pollen to contaminate wild relatives with the engineered trait. If approved, the unregulated GE American chestnut would eventually replace the wild American chestnut, which would no longer exist in the forests.

After the ESF petition is accepted by the USDA it will be opened up for public comment – anticipated to be anytime in the next few months.

American chestnut trees can live 200 years or more yet no long-term risk assessments of the GE American chestnut tree have been conducted. There are no studies to determine how these GE trees will interact with forest ecosystems as they age. Yet researchers propose to plant them in forests with no mechanism for oversight or regulation.

“ESF researchers claim they are simply returning this tree to the forests they once dominated, with no chance of potential harm. But the deregulation of this GE tree would open the door for the biotechnology and forest industry to expand and deepen the exploitation of our forests and further threaten the biodiversity of Mother Earth,” stated BJ McManama, Save Our Roots Campaign Organizer for the Indigenous Environmental Network. “Already forests are suffering the impacts of climate change, over-harvesting, and the introduction of invasive species, diseases, and pests from out of control globalization. The last thing the forests need are risky GE trees.”

“Promoters of the GE blight-resistant American chestnut tree, such as the Forest Health Initiative [3] have been very clear that it is a ‘test tree’ intended to win public approval,” added Dr. Rachel Smolker, Director of Biofuelwatch. “Engineering trees is not about ‘forest health,’ it is about manufacturing trees that produce more biomass, can be more cheaply processed in biofuel refineries or pulp mills, or produce chemicals that can be used in industrial processes. There is nothing healthy for forests about GE trees.”

Additional red flags have been raised about the funders of this technology.

“Companies like ArborGen, Monsanto (now Bayer) and Duke Energy have been sponsoring research and development of the this GE tree,” said Anne Petermann, Executive Director of Global Justice Ecology Project. “They want to use the majestic American chestnut tree to support commercial development of GE trees like poplar, pine and eucalyptus that have been strongly opposed by huge numbers of people. The last time the USDA accepted public comments on a GE tree, they received comments opposing them signed by more than 284,000 people.”

Global Justice Ecology Project, Biofuelwatch and other groups organizing against genetically engineered trees are producing a peer-reviewed White Paper on the GE American chestnut which will be available soon. People wishing to receive the White Paper or get more information about submitting public comments to the USDA can contact ruddy@globaljusticeecology.org.

At the October 27 annual meeting of the American Chestnut Foundation, ESF researchers reiterated their intent to submit an application for deregulation of the GE American chestnut this year.