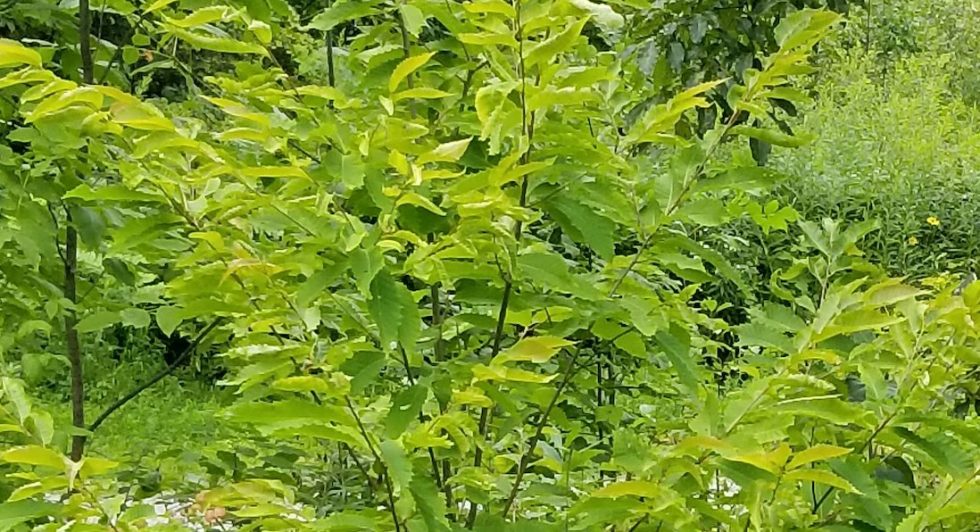 These wild American chestnuts are growing on Dr. Smolker’s land.  Photo: Langelle/GJEP
by Dr. Rachel Smolker, Co-Director, Biofuelwatch
The article “Can Genetic Engineering Bring Back the American Chestnut?” by Gabriel Popkin in today’s New York Times Magazine, did not do justice to the critical perspective on using biotechnology to restore the chestnut.
I do not support GE chestnut for these reasons:
It will not work because:
1) People have long tried and failed to engineer fungal resistance in crops of all sorts. That has failed because fungi easily evolve to overcome barriers. Fungal resistance involves many genes/traits. The one trait introduced to chestnut will not, on its’ own, result in long lasting resistance.
2) Another pathogen, Phytopthera, is lethal to chestnut and now widespread. Powell has admitted that restoring chestnut would require engineering resistance to Phythopthera as well.
So why all the bruhaha about this GE tree restoring the species?  The GE chestnut is a trojan horse. A much beloved iconic tree species to win over public opposition to the use of biotechnology on forests. Tree biotechnology is mostly  oriented to production of pulp, biofuel and chemicals.  Up next.
Until we address ongoing introduction of pests and pathogens from trade, we will continue to lose species at an alarming rate far beyond anything that biotechnology can address.  For more info, see:
https://stopgetrees.org/ge-american-chestnut-white-paper-biotechnology-for-forest-health/
print