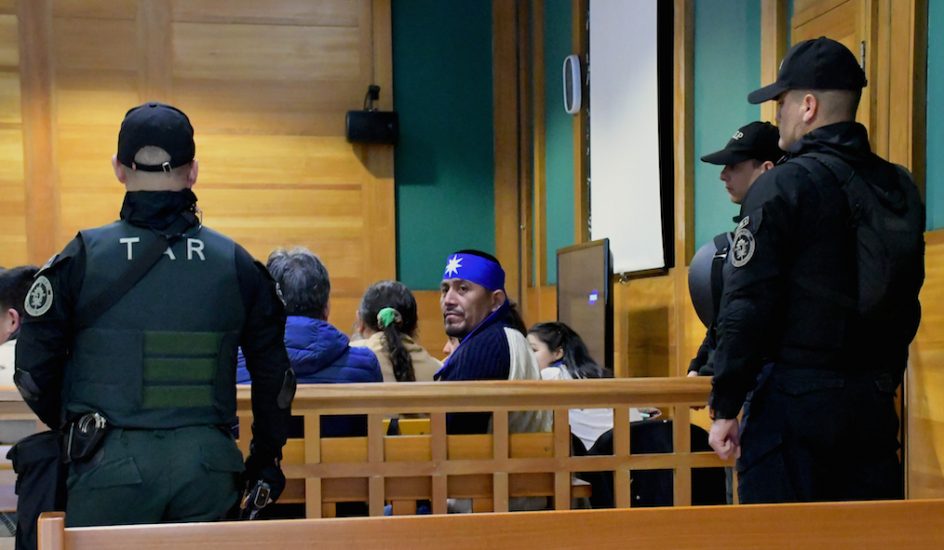 Note–In late 2019, GJEP’s Orin Langelle and Anne Petermann were in Chile with Gary Hughes of Biofuelwatch and Alejandra Parra of RADA to document and support the peoples’ uprising there.  While in Temuco, Chile following work to document a Mapuche reoccupation of ancestral territory in Curacautín in the Araucanía region, they attended the trial of Lonko Alberto Curamíl to show support and solidarity and to help spread the word of his unjust imprisonment and trial. You can read more about Curamil and GJEP’s work in Chile in solidarity with the Mapuche here: https://globaljusticeecology.org/?s=curamil

Former recipients of a prestigious environmental award, together with Amnesty International and the lawyer of indigenous land rights defender Alberto Curamil, have launched an appeal for Curamil’s safety after he was seriously injured in a shooting by police.

Curamil, an indigenous Mapuche leader who in 2019 won the Goldman Environmental Prize (GEP), also known as the “green Nobel”, was left with 18 riot shotgun pellets embedded in his body after police chased his truck and opened fire after a protest against an arson attack on a Mapuche home on contested land in southern Chile.

Former winners of the GEP, Craig Williams and Alfred Brownell, are writing to Chile’s president, Sebastián Piñera, and the country’s US ambassador, Alfonso Silva Navarro, to push for further investigation into the shooting.

Amnesty International will contact the Chilean justice department to seek answers to questions about the attack and the burning of the home of Mapuche community spokesperson Elena Paine, which sparked the protest where Curamil was injured.

To read the full article visit The Guardian