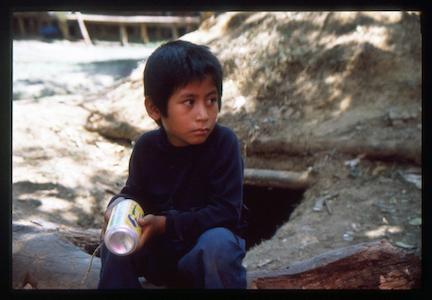 Caption: Indigenous Boy sits in front of bunker in La Realidad, the headquarters of the Zapatista Army of National Liberation (EZLN), deep in the Lacandon Jungle of Chiapas, Mexico. Photo: photolangelle.org (1996)

On this day in 1993 the Indigenous-led Zapatista Army of National Liberation (EZLN) was formed. Six weeks later, on New Year’s Day 1994, the Zapatistas rose up against the North American Free Trade Agreement (NAFTA), which they called a “death sentence” to the Indigenous Peoples of Mexico. NAFTA, a massive trade deal between the US, Canada, and Mexico went into effect on that day.

The Zapatistas condemned NAFTA due to many of its unjust provisions, but especially the revision of Article 27 of the Mexican Constitution. Article 27 guaranteed people rights to communal ejido lands in Mexico. It was an outcome of the revolution led by Emilano Zapata, from whom the Zapatistas took their name, in the early part of the 20th century. But in order for NAFTA to be passed, Article 27 had to be eliminated–a demand made by the head of International Paper which wanted access to the forests on the ejido lands.

Find more about the history of the Zapatista uprising, which continues to this day, here: http://climate-connections.org/2013/12/31/on-the-20th-anniversary-of-the-zapatista-uprising/  You can also view a photo essay by Orin Langelle on the Zapatistas and the struggle for Indigenous autonomy in Chiapas, Mexico at https://photolangelle.org/2019/02/remembering-examples/