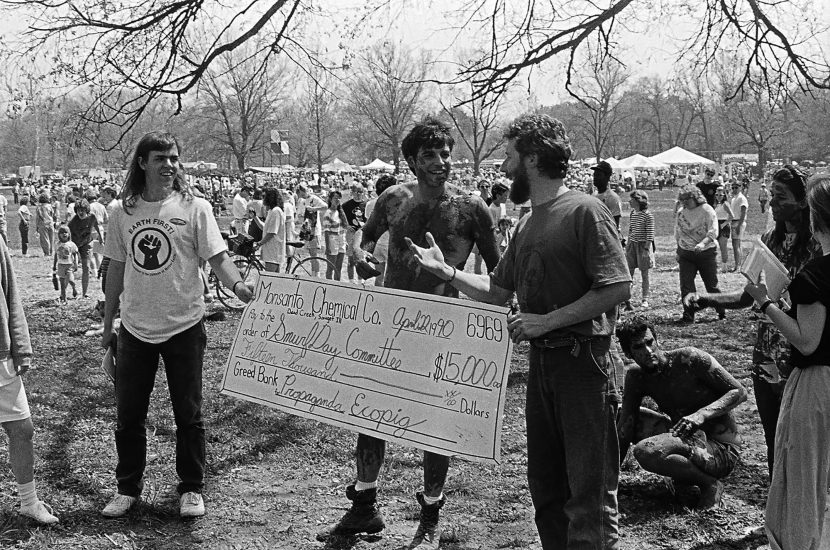 Earth First! and “Mud People” present a check to the 1990 Earth Day (Smurf Day) Committee in St. Louis, Missouri protesting the fact that Monsanto was the main sponsor of the event. The protest was featured on the evening news of a major television network affiliate in St. Louis with a reporter interviewing a mud person, who spoke only mud language. An Earth First!er translated the reporter’s questions from English to mud language, then translated the mud person’s response back to English for the reporter. Photo: Langelle/GJEP. 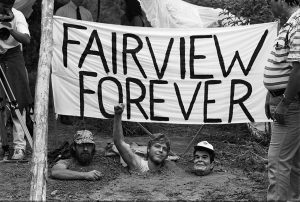 Join us Wednesday, May 11, 2022 at 4pm PT/6pm Central/7pm ET for a virtual screening of the documentary Shawnee Showdown Keep the Forest Standing. Hosted by Global Justice Ecology Project and Standing Trees with special guests Cade Bursell, the filmmaker and John Wallace, one of the activists who fought to save the Shawnee Forest over thirty years ago–winning a 17 year moratorium against logging. Photo: Langelle/GJEP.

20 Apr 2022-As part of the show’s Earth week coverage Margaret Prescod, host of the KPFK’s Sojourner Truth show, interviewed John Wallace, and Steve Taylor and Orin Langelle of GJEP, who took part in the Shawnee Showdown over 30 years ago to discuss their experience and the present fight to establish the Shawnee Forest as the nation’s first climate preserve.

15 Apr 2022-The April/May 2022 issue of The Progressive Magazine features a photo essay, United Nations, United Opposition, by GJEP’s Orin Langelle in their “On The Line” section. Since 1909, The Progressive has aimed to amplify voices of dissent and those under-represented in the mainstream, with a goal of championing grassroots progressive politics.

Global Justice Ecology Project’s Breaking Green podcast talks with activists and experts to examine the intertwined issues of social, ecological and economic injustice. Breaking Green also explores some of the more outrageous proposals to address climate and environmental crises that are falsely being sold as green. 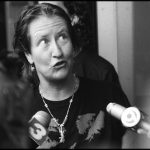 In this episode of Breaking Green, we speak with Karen Pickett, a long time Bay Area environmental activist, who talks about the government-sanctioned violence and repression that has historically been levied against activists working for change, as well as the activists that have fought back.

Karen discusses the work of famed civil rights lawyer and friend Dennis Cunningham who defended many of these activists over his decades-long career. Dennis passed away on March 6, 2022 at age of 86.

Please support Breaking Green and independent journalism with a donation

21 Apr 2022-The Biden administration has announced plans to resume oil and gas drilling on public lands, despite halting new drilling leases in 2021. The proposal, which raises royalties for oil and gas companies by 50% to supposedly limit global emissions, is being condemned as “a reckless failure of climate leadership.”

14 Apr 2022-On the heels of the latest Intergovernmental Panel on Climate Change report, organizers, including 1000+ scientists, kicked off “the world’s largest-ever scientist-led civil disobedience campaign.”

7 Apr 2022-This week an open letter denouncing The Nature Conservancy was publicly released from 158 organizations with over 3.5 million members working to protect forests as a critical climate justice solution.

31 Mar 2022-According to a global study comparing the performance of two forest restoration efforts published in the journal Science, researchers have found that native forests are more effective in climate mitigation than monoculture plantations.

21 Apr 2022-Desmond D’Sa is a South African environmentalist who received the 2014 Goldman Prize. He is known for protesting Environmental justice issues in Durban, South Africa related to access to greenspace and pollution and founded the South Durban Community Environmental Alliance. He speaks about the immense devastation caused recently in Durban, South Africa when the region was hit by historic heavy rains and flooding that killed more than 400 of the “poorest of the poor,” and displaced thousands.

14 Apr 2022-Dr. Gary Wockner is a Global Environmental Activist, Scientist, Writer specializing in river and water protection and climate change. Gary founded and directs three river protection organizations, the biggest of which, Save The Colorado, focuses on protecting the Colorado River. He speaks in this interview about hydroelectricity as a dangerous false solution to climate change.

1 Apr 2022-Zack Porter is the Executive Director of Standing Trees, an organization he co-founded in 2020 to protect and restore forests on New England’s public lands that is fiscally sponsored by GJEP. Zack is a passionate wild forests advocate who has dedicated his professional life to making North America a wilder place, and spends this interview addressing the key role of mature forests in avoiding the worst impacts of the climate catastrophe.

When GJEP identifies a group or organization whose non-for-profit work closely aligns with our mission, we may support their important work by becoming a fiscal sponsor. This helps them minimize bureaucracy so they can focus on their crucial work for ecological and social justice, forest protection and/or human rights. GJEP fiscally sponsors BiofuelWatch, Vermont Street Medics, Save the Pine Barrens, NH PANTHER, Center for Grassroots Organizing, Standing Trees VT and Shawnee Forest Defense.

Sign the petition to support a new Shawnee National Park and Climate Preserve.

To learn more go to shawneeforestdefense.org.