GJEP partners with the Sojourner Truth show on KPFK Pacifica Radio, Los Angeles for a weekly Earth Minute on Wednesday and an Earth Watch interview on Thursday. 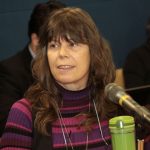 Silvia Ribeiro is the Latin American Director of ETC Group (the Action Group on Erosion, Technology and Concentration) based in Mexico. She is a well-known lecturer, writer, editor and educator on emerging technologies (including geoengineering and biotechnology) and collaborates with a wide spectrum of Latin American organizations and social movements. Silvia is part of the editorial committee of the magazine ‘Biodiversidad, Sustento and Culturas’, and regularly publishes articles, including in Mexico’s ‘La Jornada’ and in Desinformemonos.org. With ETC group, Silvia has participated in the negotiations of several UN Treaties on biodiversity, food, environment. She has critically followed the debate and developments of geoengineering and its actors for over a decade.

For an in depth conversation about geoengineering listen to our interview with Silvia here: Geoengineering on a Global Scale