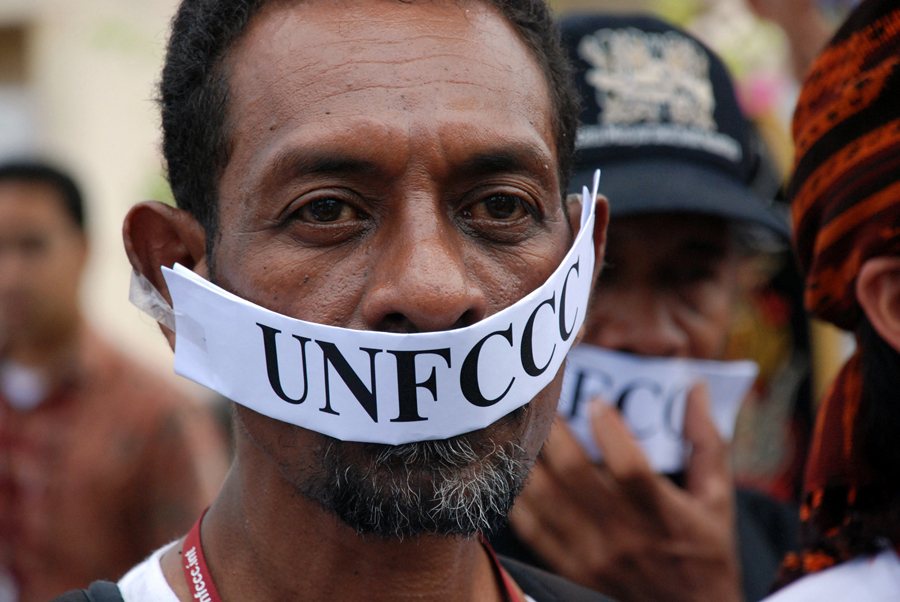 Check out Gary Hughes from Biofuelwatch as he reports on the  California Tropical Forest Standards and Carbon Offsets.

“We really want folks to be aware of the dangers of these market-based schemes because they are protecting polluters more than they are protecting people and the planet….We are saying no more offsets, that we need real emissions reductions at the source.” -Gary Hughes.

Hughes will be in Santiago, Chile later this year for events surrounding the United Nations Framework Convention on Climate Change.

Shut Out (2007) Bali, Indonesia: An Indigenous man with his mouth covered by a UNFCCC (United Nations Framework Convention on Climate Change) gag protests the UN climate talks in Bali, Indonesia.  The gag symbolized the systematic and forceful exclusion of Indigenous delegates from a meeting with the UNFCCC Executive Secretary the day before.  They were also protesting being shut-out from the official negotiations even though it is their lands being targeted for unjust climate mitigation schemes like forest carbon offsets.

“This process has become nothing but developed countries avoiding their responsibilities to cut emissions and pushing the responsibility onto developing countries …  People are being relocated and even killed; my own people will soon be under water.  The money from these projects is blood money.” ­­– Fiu Mata’ese Elisara-Laula, O Le Siosiomaga Society, Samoa.