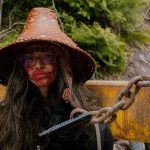 Over 1,000 arrests as Indigenous peoples and environmental campaigners fight to stop logging on Vancouver Island’s ancient forests. Rainbow Eyes, a pseudonym adopted for her own protection, is an Indigenous land defender with the Rainforest Flying Squad who was recently arrested at the Fairy Creek blockade and released from jail.

GJEP partners with the Sojourner Truth show on KPFK Pacifica Radio, Los Angeles for a weekly Earth Minute on Wednesday and an Earth Watch interview on Thursday.