By Andrea Germanos
Originally published at Common Dreams
Earth is “on the edge.”

So declared the EU’s Copernicus Climate Change Service (C3S) Thursday, announcing that 2016 was the warmest year on record.

According to meteorologist Jeff Masters, who is not part of the C3S: “The 3-year string of warmest years on record is the first time such an event has happened since record keeping began in 1880.”

“We are already seeing around the globe the impacts of a changing climate,” Copernicus’s Juan Garcés de Marcilla. “Land and sea temperatures are rising along with sea-levels, while the world’s sea-ice extent, glacier volume, and snow cover are decreasing; rainfall patterns are changing and climate-related extremes such as heatwaves, floods and droughts are increasing in frequency and intensity for many regions.” 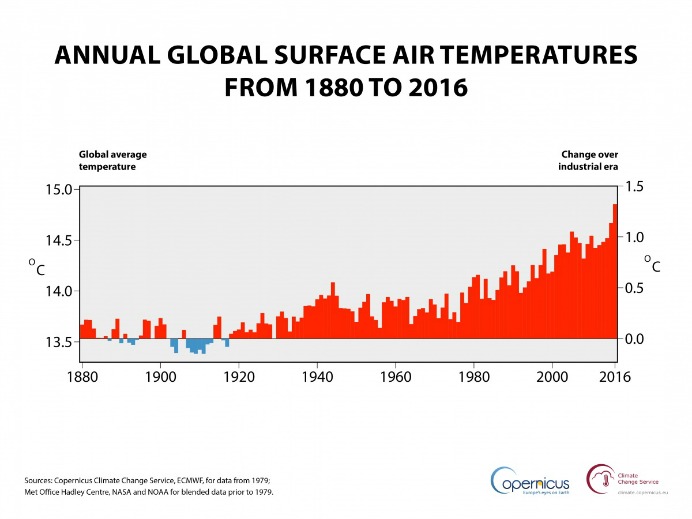 According to a press statement from Copernicus, “2016’s global temperature exceeded 14.8°C, and was around 1.3°C higher than typical for the middle years of the 18th century.”

The peak for global temperatures occurred in February, when they were around 1.5°C higher than at the start of the Industrial Revolution—the global warming cap goal global nations agreed to in the Paris climate deal negotiated at the end of 2015.

Yet, as Masters, noted, “[a]ssuming that all nations who agreed to the Paris Climate Accord in 2015 fulfill their pledges, Earth is on track to see 2.3°C of warming over pre-industrial levels by 2050. This is above the ‘dangerous’ 2°C level of warming considered likely to greatly increase the risk of hunger, thirst, disease, refugees, and war.”

The incoming U.S. administration, however has given signs that it will go full-speed ahead at driving further climate change. Among other things, Donald Trump has chosen climate change skeptic and “fossil fuel industry puppet” Scott Pruitt to head the EPA, while the president-elect himself falsely declared last month that “nobody really knows” if climate change is real, and has also threatened to cancel the Paris climate deal.

Taking that action, said noted climate scientist Ben Santer of the Lawrence Livermore National Lab in California, would be like “embracing ignorance with open arms.”

“A number of devastating earthquakes and powerful storms made 2016 the costliest twelve months for natural catastrophe losses in the last four years,” it said in a statement.

At over $31 billion USD, the costliest disaster of the 750 events was a pair of earthquakes that hit the Japanese island of Kyushu in April; the costliest to hit North America was Hurricane Matthew, and the flooding in August in the southern United States was also a notably expensive disaster.

“A look at the weather-related catastrophes of 2016 shows the potential effects of unchecked climate change,” said Peter Höppe, Head of Munich Re’s geo risks research unit. “Of course, individual events themselves can never be attributed directly to climate change. But there are now many indications that certain events—such as persistent weather systems or storms bringing torrential rain and hail—are more likely to occur in certain regions as a result of climate change.”