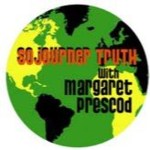 Global Justice Ecology Project’s Anne Petermann spoke about the wildfires in Chile on the Sojourner Truth Radio Show for this week’s Earth Minute segment. Sojourner Truth airs every week on KPFK-FM in Los Angeles and streaming around the world.

Chile is in a state of emergency after wildfires broke out on an unprecedented scale. Several towns have burned to the ground due to rapidly moving fires.

Weather forecasters predict more of the hot, dry, windy weather feeding the fires, but their cause is still being investigated.

Many point the finger at climate change and tourist negligence, but the country’s pulp and paper industry is also being scrutinized.

In this region of Chile, much native forest has been lost to non-native eucalyptus and pine plantations, which have helped spread the fires more quickly.

The Guardian quoted Mary Kalin Arroyo of the University of Chile that, “About 42% of the forest fires are in plantation forests, which are like matchboxes,” and, “spread fire to native forests.”

The indigenous Mapuche people have been fighting plantations in Chile since Pinochet allowed timber companies to plant them on Mapuche lands. They know the devastation of timber plantations, and now the rest of Chile knows it, too.

The Earth Minute segment begins at the 28 minute mark of the clip below.