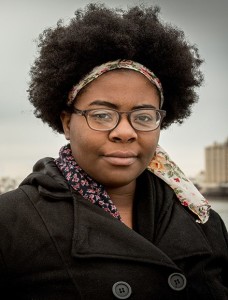 If the trash burning company Energy Answers had been able to keep its plan to build the nation’s second largest incinerator under the radar, it would be getting ready to churn out toxic pollutants into the Curtis Bay neighborhood of Baltimore right now. If no one had blown the whistle on the company’s sneaky plans, it would have become another dirty facility in the city with the nation’s highest rate of air pollution related deaths.

But someone did blow the whistle, and rather loudly. That someone was a high school student named Destiny Watford, along with her fellow organizers at  Free Your Voice (the human rights committee of United Workers). Today, Destiny was honored with the Goldman Environmental Prize for her courageous organizing.

Destiny was born and raised in Curtis Bay, and she takes great pride in her community.  So when Free Your Voice (co-founded by Destiny and other students at her high school)  found out about plans to build another massive, polluting facility in her neighborhood, they started asking questions: How have asthma and cancer become unquestioned realities for everyone around me? What happens when you burn 4,000 tons of trash a day just a mile from a school? Why is a facility that emits so much mercury, lead, and carbon dioxide being called a climate solution? How do you change what seems to be the fate of your community?

They learned that the incinerator would be permitted to emit 240 pounds of mercury and 1,000 pounds of lead every year, chemicals that can cause lifelong brain damage. They went to classes and asked how many students had asthma, and sometimes every kid raised their hand. They knocked on neighbors’ doors, and were told, “what do you expect? Curtis Bay has always been a dumping ground.” They learned that no health assessment had ever been done of this proposed facility, even though it was slated for a community that already had far more than its fair share of environmental contamination and related health problems.

Rather than accept another polluting facility in their community, the students of Free Your Voice and their allies at United Workers ran a beautiful campaign for justice and human rights. They educated their neighbors, organized meetings, made videos, and some got arrested. They campaigned financially, convincing the Baltimore spending committee to end its contracts with the incinerator. They worked with the Environmental Integrity Project to campaign legally, petitioning the Maryland Department of the Environment to pull the permit for the company to build. They developed an alternate plan for Fair Development, rooted in the principles of human rights and environmental justice. They connected with organizations like GAIA and many other grassroots groups, and learned about incinerators being shut down all across the country, the  violations these facilities committed, and the climate policies that keep the remaining ones alive. They drew inspiration from a meeting that United Workers set up with organizers from South Africa’s Shack Dwellers’ movement, who they felt were in a similar struggle for the human right to housing. In defense of their community and motivated by their deep conviction that all people deserve a safe and healthy place to live, Destiny and her partners organized tirelessly to stop this dirty project.

“Waste-to-energy” — If it sounds too good to be true, it’s because it is.

Energy Answer is a New York-based company with a website that claims “we are all environmentalists.” You have to look long and hard on their website, past the wildflowers and empty green talk, to discover they’re actually in the dirty business of burning trash. And while companies like Energy Answers claim to be producing energy from waste, most of what they produce is pollution.

Decades ago, when the tide starting turning against incineration in the U.S, and coal and oil were getting a bad rap, trash burning companies rebranded themselves as “waste-to-energy,” claiming that they can renewably produce energy from waste. But burning trash is a climate disaster, emitting high levels of greenhouse gases alongside toxic pollution.

Still, the greenwash was effective. In Maryland, and many other places, trash burning is treated as tier 1 renewable energy —  the same as wind and solar power. Climate policies like the Clean Power Plan in the U.S. (and other policies around the world) have wrongly classified the burning of organic waste (stuff from plants) to be renewable energy. This rebranding of trash burning as a “climate solution” keeps polluting facilities alive through climate subsidies all over the country.

State subsidies for incineration are among the biggest barriers to community victories like that of Curtis Bay. For example, state climate subsidies are a lifeline to the costly Detroit, Michigan incinerator, which has faced years of grassroots resistance. In Puerto Rico, Energy Answers is attempting to build a trash burning incinerator as an “energy solution” — using taxpayer money. But if Curtis Bay is any indication, Energy Answers is in for a fight.

“Our challenge was to make the world dance.”

At the heart of free your voice’s organizing was a fundamental belief in the human right to live in a healthy community. The incinerator would have been built less than a mile from two schools, spewing thousands of pounds of lead and mercury into children’s bodies. Yet as the students of Free Your Voice began organizing around the incinerator, they found that it was part of a long history of failed development in Curtis Bay. They studied the structural racism that made their community a target for polluting projects. “We became scholars in [our] history,” explained Destiny in a speech at the 10th annual Human Rights Dinner, “the incinerator and the fact of it’s location is no incident, but fits into a historical pattern of meeting the demands of the economy without worrying about the cost… the incinerator project was a routine development in the life of my community, another market driven product extracting wealth.”

But Free Your Voice was not content to let this incinerator become another step in the failed development of Curtis Bay. They wanted to use art and creativity to transform the fate of their community. “Our hearts and minds have been set aflame by the injustice of the incinerator,” Destiny declared, “now our challenge was to make the world dance… art draws out the humanity in us, it reaches people on a deeper level.” And so they organized a concert for fair development, performed an environmental justice rap for their school board, and they changed minds.

While dancing, educating the community about health threats from trash burning, and exposing greenwash, Free Your Voice also pursued a financial kill strategy. They had learned that the incinerator depended on income from its energy — and that the school board had entered into a contract to buy that energy.  So Free Your Voice went to have a talk with her local School Board. “We are here tonight,” Destiny told them, “to make it clear that this incinerator threatens the very idea of equity that we — students, teacher, parents, and board members — share. We ask everyone here tonight… is it fair to build the incinerator in the city that has the highest rate of air pollution related deaths in the nation? Is it fair to have your life cut short because of where you are born? We say that it is not fair and it is not right. The incinerator is failed development.” The students also performed the song shown above.

Again, Free Your Voice was persuasive. In February 2015, the Baltimore Regional Purchasing Committee declared that it would end its contract with Energy Answers.  This was the beginning of the end for Energy Answers, and a major victory for the people of Curtis Bay.

But the people of Curtis Bay weren’t satisfied, and neither was Free Your Voice. They needed to make sure the project couldn’t rise back up like a zombie. And to do that they had to pull the permit for the incinerator and take control of the land that had been slated for the monster incinerator. They called upon the Maryland Department of the Environment (MDE) to declare that Energy Answers’ permit had expired, and to allow community control of the land and encourage Fair Development alternatives.

One beautiful day in December 2015, Nearly 200 people gathered at the MDE and prepared to form a single file line and one by one drop off hand cut sunflower petitions and comments. When community leaders, including Charles Graham and Josh Acevedo, and Todd Cherkis of United Workers, were allowed inside to plead their case, seven of them were arrested. Upon release, these brave 7 headed straight back to the MDE headquarters.

The organizing and resilience displayed by the community was not in vain.  On March 17, 2016, the MDE pulled the contract for the incinerator. The project was good as dead.

Having successfully blocked the incinerator, Free Your Voice is far from done with their organizing. Now, they’re calling on FMC Corporation to release 90 acres of land being held by a trash burning incinerator company in order to make way for a community owned solar farm. At the same time, communities around the world are blocking dirty proposals and implementing beatiful solutions that replace waste and injustice with circular economic systems and local empowerment. Previous Goldman Environmental Prize winners like Nohra Padilla and Rossano Ercolini are transforming their cities by empowering

recycling workers and implementing zero waste systems. GAIA members and allies around the world are campaigning to stop climate subsidies for incineration and implement zero waste pathways to climate justice.  Take action now to support Destiny, Free Your Voice, and the thousands of communities around the world that are standing up in defense of justice at unitedworkers.org/take_action

About the Global Alliance for Incinerator Alternatives: GAIA is a worldwide alliance of more than 800 grassroots groups, non-governmental organizations, and individuals in over 90 countries whose ultimate vision is a just, toxic-free world without incineration.