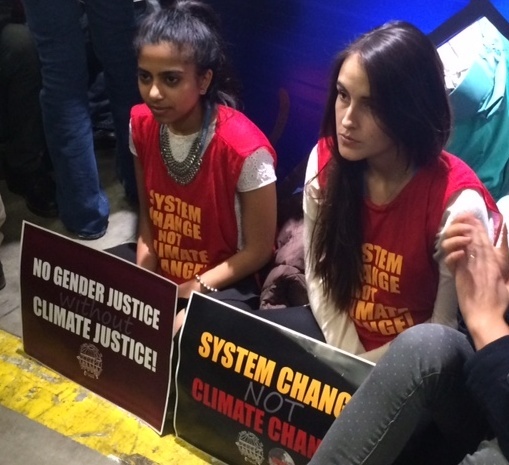 Just moments ago, climate justice activists held a vibrant sit-in and mic check action outside the two main plenaries of the Le Bourget COP 21 negotiation center. This action was initially unsanctioned, but held in cooperation with the United Nations security team. It began as those with observer badges converged from multiple sites to take over an art exhibit of animals, the Arche de Noé Climat, made from recycled materials commissioned by the French Minister of Ecology. One activist proclaimed, “We gather here among these animals to show the world” just how the negotiators are acting here in Paris. 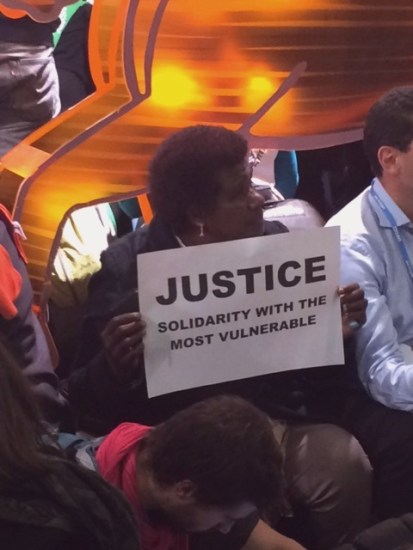 Rallying under cries of “Another World is Possible” and”“1.5 and we MIGHT survive”, a reference to the need to increase previous goals of holding the global world temperature increase to 2 degrees Celsius, several speakers from movements of the Global South took to the floor to make their statements. Among the main concerns were the delays in negotiations, lack of mitigation ambition from developed countries, lack of financial and technology transfer commitments for developing countries, and the severe disparity that exists between the Global North and South.

The event occurred just after COP21 President, Laurent Fabius, released the newest draft outcome. Though it had been trimmed in length, the document shows several weaknesses. Specifically, it lacks agreements on a global temperature target, collective emissions reductions targets, details on finance for developing countries, recognition of the rights of Indigenous Peoples, and a compliance mechanism. The negotiators are set to reconvene at 8 pm CET to begin debating the new draft.