The average hottest day of the year in Europe, North America and Asia has been made significantly more intense as a result of deforestation since the start of the industrial revolution, a study finds.

The research considers the dual impact that deforestation has on the climate: first, that clearing forests releases CO2 into the atmosphere where it contributes to rising global temperatures; and second, the large impact it can have on physical processes in the local climate – which can have a net warming or cooling effect more widely.

The combined impact of deforestation has been so large in some areas that, until around 1980, it played a greater role in hottest day temperature rise than greenhouse gas emissions, the lead author tells Carbon Brief.

The findings suggest that replanting trees – via afforestation or reforestation – could be a way of shielding against further increases in hottest day temperatures, the author adds.

The new study, published in Nature Climate Change, estimates how deforestation from the start of the industrial era to recent times has affected temperatures on the hottest day of the year for a range of countries.

Deforestation is a key contributor to human-caused climate change. When forests are cleared or burnt, they release the carbon they store. Removing trees also diminishes an important carbon “sink” that takes up CO2 from the atmosphere.

Since 1990, around 129m hectares of forest – an area roughly the size of South Africa – have been chopped down by humans. Deforestation, along with other types of land use change, accounts for close to 11% of annual global CO2 emissions. From 1861-2000, deforestation accounted for 30% of CO2 emissions, according to the new research.

Deforestation can also affect temperatures through its effect on a range of different physical processes. These effects occur at local and regional scales, but can have global repercussions.

One such process is evapotranspiration, a term describing the exchange of water between the land and the atmosphere.

As part of this process, forests absorb water from the soil through their roots and later release it into the air as moisture, which has a cooling effect on the air above. When trees are cut down, this cooling effect disappears.

When these physical processes are considered alongside the impacts of carbon release, it is possible to deduce that deforestation has played a “significant” role in driving up hottest day temperatures, says lead author Dr Quentin Lejeune. Lejeune is currently a research associate at Climate Analytics, a not-for-profit climate science and policy institute based in Berlin. He tells Carbon Brief:

“During the industrial period, many areas over the mid-latitudes – especially in North America, the current Eastern Europe and Russia – experienced high rates of deforestation. We found that this led to significant local increases in daytime temperature during hot days.”

For the study, the researchers used a group of climate models to “reconstruct” historical hottest day temperatures between 1861 and 2000.

Their simulations considered the role deforestation played in hottest day temperatures through both carbon release and its effect on physical processes. They also considered a range of other factors that can influence global temperatures, including greenhouse gas emissions, aerosols and volcanic eruptions.

The results show that, in regions where at least 15% of forest cover has been removed from pre-industrial times to today, deforestation accounts for one third of the increase in temperature of the average hottest day of the year. Lejeune says:

“Because deforestation occurred relatively early in the industrial period, we estimate that these processes were – for a long time – the biggest contributor to warming during hot days over these regions. [This effect was] superseded by the effect of increased greenhouse gas concentrations in the second part of the 20th century.”

The map below shows the local effects of deforestation on hottest day temperatures in different parts of the world from present day (1981-2000), when compared to pre-industrial conditions.

On the charts, red is used to show a net increase in the temperature on the hottest day of the year, while blue shows a net decrease. Boxes are used to highlight the results for North America (left), Europe (middle) and Asia (right). 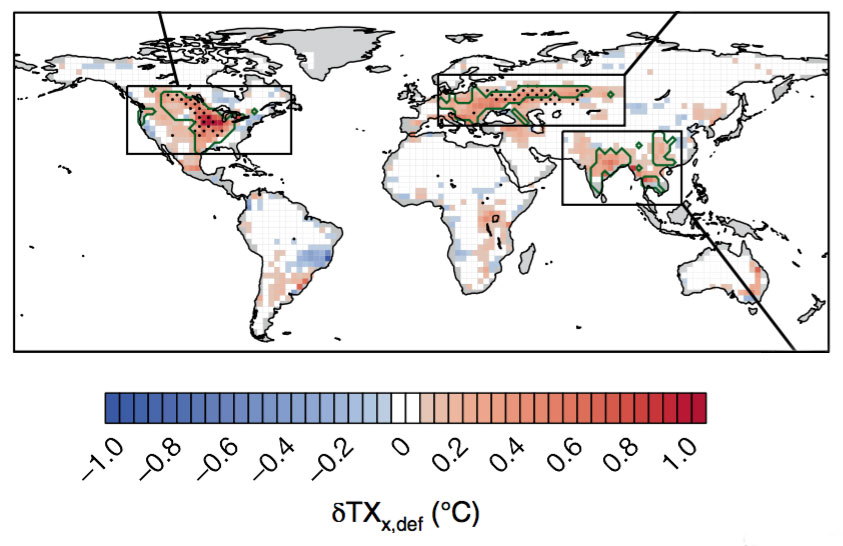 The results show that the effect of deforestation on hottest day temperatures was largest across North America and Europe, says Lejeune:

“Over the Central US, we estimate the daily maximum temperature during the hottest day of the year has increased by up to 1C due to these processes.”

Both North America and Europe saw massive amounts of deforestation through the industrial revolution, the research notes. In the second half of the 19th century in the US, for example, an average of 34 square kilometres of forest (pdf) was cleared every single day to make way for settlements and farming.

However, some regions that have recently experienced large amounts of forest loss, such as Brazil, experienced a net decrease in hottest day temperatures.

This could be down to how the removal of trees affects land albedo – or the proportion of sunlight that is reflected back towards space, Lejeune says.

In North America and Europe, deforested land is more likely to have been converted to urban spaces, which also tend to have a low albedo. As a result, the cooling effect of deforestation in these regions is likely to have been outweighed by warming impacts.

The research highlights the “considerable” impact that deforestation and other types of land use change can have on temperature rise, particularly on the local scale, says Lejeune:

“Decision makers who have to decide what the land should be used for – agriculture, biodiversity protection, reforestation to sequester carbon – should be aware that these decisions can have implications for the climate of the particular region that they live in.”

“Our results suggest that reforestation and afforestation could be effective at lowering regional temperatures, for these particular regions and this particular time of the year.”

The new research is “useful” but relies on models that do not capture all of the effects of land use change on hottest day temperature increases, says Prof Andrew Pitman, director of the Australian Research Council Centre of Excellence for Climate Extremes, who was not involved in the study. In 2012, Pitman was the lead author of a research paper finding that past deforestation and other land use change has caused a decrease in in extremely warm daytime temperatures over mid-latitude regions. He tells Carbon Brief:

“The models they use – which are the only models they could have used – do not represent well the synoptic-scale processes like blocking and therefore the reliability of their results is unclear.”

“Blocking” patterns are areas of high pressure that remain nearly stationary and therefore block the movement of other weather systems. Blocking patterns can stay in place for up to a week, leading to countries beneath them experiencing prolonged periods of hot weather, such as heatwaves.

In addition, the cooling effect of reforestation projects is likely only to have local benefits, Pitman adds:

“The scale of reforestation in the next 50 years will be trivial in comparison [to historical deforestation]. I therefore doubt that reforestation would have a large impact at any reasonable scale. I do think it could have a major local impact.”