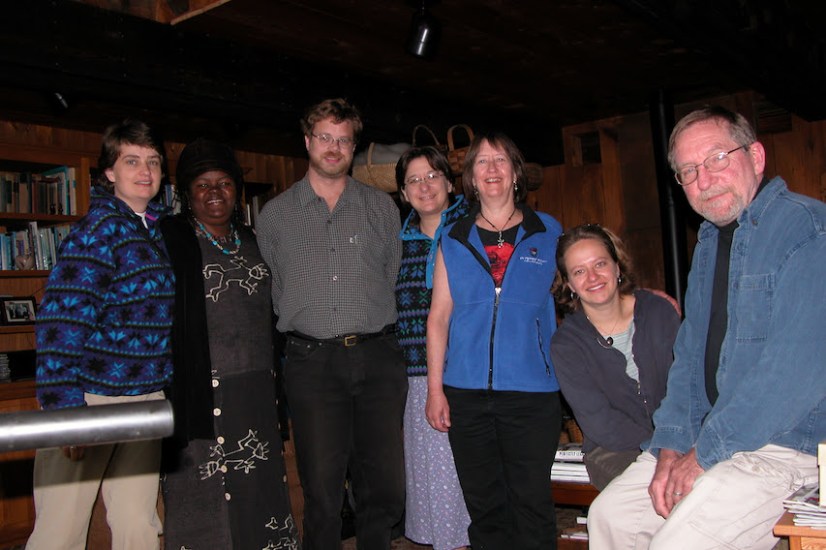 Before we let you know about the progress of our programs, we need to take a moment to let you know of the sudden passing on Saturday 5 December of Soren Ambrose.

A wonderful friend, outstanding organizer and powerful enemy of the ruling elite, Soren was  a founding board member of GJEP and helped the organization navigate the waters of social and ecological justice work for the past 17 years.

He was a leading organizer and strategist for the anti-corporate globalization movement of the early 2000s, especially A16, the April 16, 2000 shutdown of Washington, DC during the annual meetings of the World Bank. This was the first major protest after the shutdown of the World Trade Organization (WTO) meetings in Seattle on November 30, 1999.

The board and staff of Global Justice Ecology Project sends our heartfelt condolences to his wife Njoki Njehu and his mother and father in Chicago.

On October 19, 2020 the initial public comment period by the United States Department of Agriculture (USDA) on the petition for deregulation of Darling 58 genetically engineered (GE or genetically modified) American Chestnut closed. Below are excerpts from comments submitted to the USDA by members of the Campaign to STOP GE Trees.

The Indigenous elders and community peoples who we’ve consulted with have expressed concern that this and each successive step taken toward genetically altering the building blocks of life (DNA), by unnaturally combining DNA from totally unrelated organisms is not the way to right the wrongs that to date humans have caused. They are opposed to genetically engineering plants, animals, naturally occurring organisms that are not found in nature and in so doing, is dangerous at best and catastrophic in the long run.

The Canadian Biotechnology Action Network asks the US Department of Agriculture to deny the request to deregulate the genetically engineered (GE or genetically modified) American chestnut “Darling 58” in order to protect forest ecosystems in North America and, in particular, to prevent any contamination from this genetically modified organism (GMO) into Canada. Such GE contamination, originating from the US, could adversely impact the environment in Canada and could jeopardize American chestnut recovery strategies in Canada.

There are not enough observations and data in the Petition for [USDA] APHIS to be able to assess plant pest risks and environmental, health and other impacts of Darling 58. Petitioners claim that, “[a]s described in this petition, Darling 58 has been studied in detail and no plant pest or environmental risks have been observed.” (Petition at 18; more at 101). However, Darling 58 was first regenerated from somatic embryo cultures in 2013 (Petition at 74) and has only been planted from seeds in field trials since 2017 (Petition at 82, 231).

A close look at who is promoting the GE American chestnut reveals direct and indirect financial and other links between the nonprofit The American Chestnut Foundation, the researchers developing the GE AC, tree biotechnology company ArborGen, biotechnology company Monsanto (now Bayer), Duke Energy, government agencies, and other entities including the Forest Health Initiative and the Institute of Forest Biosciences that are deeply invested in advancing the use of biotechnology for forest restoration as a public relations tool.

Forests Are About to Become Genetically Modified

As Powell and Maynard push forward with the current support of The American Chestnut Foundation and others interested in populating the forest with genetically engineered trees, The Campaign to STOP GE Trees brings to light many of the questions regarding safety and the future of the environment that have not been addressed.

The majestic American chestnut was once common in forests in the eastern U.S., but a blight has killed billions of these giant trees. Researchers are moving forward with genetically-modified trees that will survive the blight. But as Julie Grant of The Allegheny reports, critics think genetically-engineered chestnuts could adversely damage the ecosystem and lead to a slippery slope of other GMO approvals.

For more news and media coverage from the Campaign to STOP GE Trees visit:https://stopgetrees.org/news/press-coverage/ 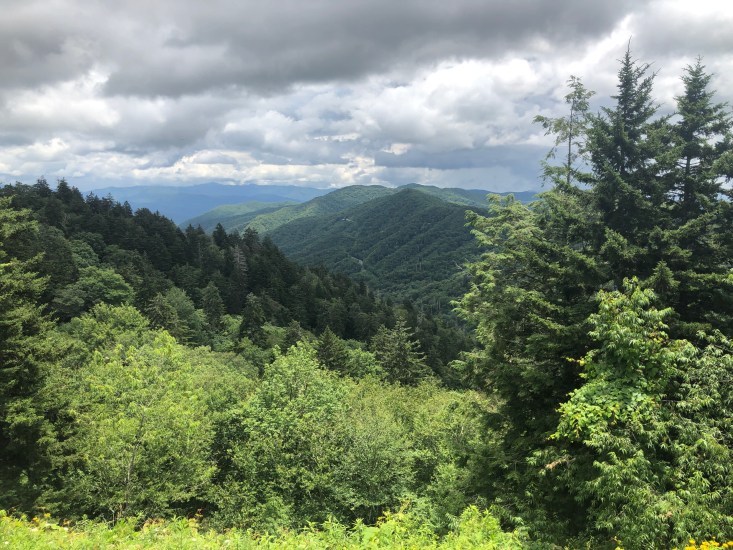 Great Smoky Mountains National Park. As humans diminish biodiversity by cutting down forests and building more infrastructure, they’re increasing the risk of disease pandemics such as COVID-19. According to numerous scientists and NGOs like GRAIN, the destruction of wild ecosystems from deforestation, logging and industrial farming will result in the emergence and spread of ever more new viruses unless we recreate our relationship with nature, defend our environment and protect wild forests. GJEP is a vital part of this work. Photo: Theresa Church, Global Justice Ecology Project

For our analysis of the Covid-19 crisis visit: https://globaljusticeecology.org/covid19-analysis/

Earth Watch: Rachel Smolker on the International Day of Action on Forest Biomass

Rachel Smolker is co-director of Biofuelwatch where she works to raise awareness of the impacts of large scale bioenergy on climate, the environment and human rights.  Her work has spanned from local grassroots organizing to participation in the United Nations conventions on climate and biodiversity. She is on the steering committee of the Campaign to Stop GE Trees. She has a Ph.D. from the University of Michigan, and worked previously as a field biologist. She lives in Vermont where she is organizing resistance to a fracked gas pipeline and to logging on public lands.

Amy is a Senior Attorney in the Center for Food Safety’s Portland, Oregon office. As part of CFS’s legal team, Amy practices environmental and administrative law to defend farmers, communities, and the environment from industrial animal factories, aquaculture, genetically engineered crops and animals, and the overuse of toxic pesticides, especially in the Pacific Northwest. A graduate of Lewis & Clark Law School, Amy has focused her career on public interest environmental and food law to fight for a just and restorative food system.

The Trump administration is racing to roll back even more environmental safeguards aimed at protecting the nation’s air, water and land. Over the course of four years his administration has weakened or wiped out more than 125 environmental rules and policies, including the sale of drilling rights in Alaska’s Arctic National Wildlife Refuge.

After 4 years of an administration who has denied the science around climate change, rolled back nearly 100 environmental regulations and committed mass human and civil rights violations, this is not only a “time to heal in America,” but a time to address the damage that has been done to our Earth and our communities.

GJEP’s co-founders Orin Langelle and Anne Petermann have supported the uprising of Indigenous Peoples in the Southeastern state of Chiapas, Mexico since the Zapatistas first rose up on New Year’s Day in 1994, against NAFTA, the North American Free Trade Agreement.  The Zapatistas called NAFTA “a death sentence for the Indigenous Peoples of Mexico” due to its socially and ecologically disastrous provisions, including eliminating the hard-won Article 27 of the Mexican Constitution which guaranteed the right to communal lands.

For more on the history of resistance of the Zapatistas visit: https://globaljusticeecology.org/?s=Zapatista 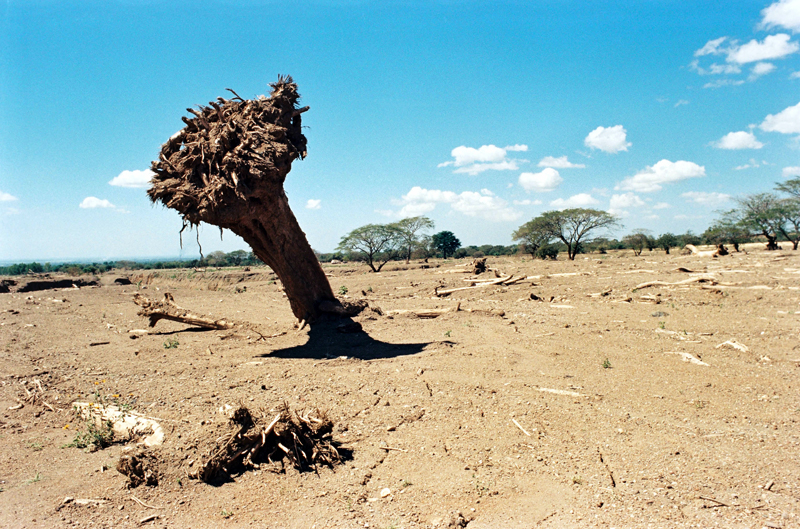 Posoltega, Nicaragua following Hurricane Mitch: This tree was uprooted and stuck upside down in the mud after the crater lake of the Las Casitas volcano burst during Hurricane Mitch in 1998. The major mudslide this caused buried entire villages near Posoltega, Nicaragua. This tree marks the mass grave of thousands of people, and the land affected by the mudslide resembles a desert. Photolangelle.org (1999). Earlier this fall we watched the same tragedy unfold with Hurricanes Eta and Iota which both slammed into Atlantic Nicaragua. If you care to make a donation to help people with recovery efforts, you may do so here.

Your year end gift to GJEP will be DOUBLED! Please send a gift today.