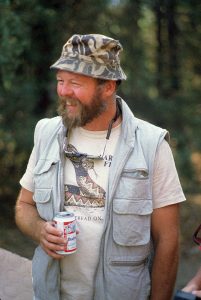 Dave Foreman at the Earth First! Round River Rendezvous in the Jemez Mountains of New Mexico in 1989. Photo: Orin Langelle

Earth First! was not an organization, but a movement that brought many people through its ranks–many of whom went on to form new organizations that included some of its radical biocentric politics.

In 1990, Foreman and four others were arrested by the FBI after agents infiltrated an Arizona Earth First! group, encouraging them to sabotage a power line in what many accused was a clear case of entrapment.  Foreman, who was not involved in the action, was arrested on a charge of conspiracy ostensibly for penning Ecodefense: A Field Guide to Monkeywrenching.

Foreman had many very public arguments with leftist environmentalists and ecologists – especially over some of his most controversial misanthropic statements and writings. Most well-known of these arguments were his debates with Earth First! activist and labor organizer Judi Bari and Social Ecology Founder Murray Bookchin.

For an interesting look at this debate within the conservation movement, have a look at Murray Bookchin and Dave Foreman: Defending the Earth: A Debate from 1989.

“I have been in a not always comfortable dance with the left. I share a number of commitments with the left, yet, I come at my politics from a somewhat different direction. For years, my primary political and philosophical tradition has been the U.S. conservation movement. My heros are Henry David Thoreau, John Muir, Aldo Leopold, and Bob Marshall. For all the complaints about my ignorance about the left, a lot of leftists have never seriously grappled with the ideas of these people. Our traditions overlap, sure, but they are also different.

I come from the wide open spaces of New Mexico. I haven’t come from the urban centers of the East where the left tradition is so much stronger than in the Southwest. The left tradition is not something I understand that well. Leftists often talk a little different language than me. That doesn’t mean we have to fight; it just means we start out emphasizing different things.

I actually think we have a lot to learn from each other. I don’t necessarily consider myself a leftist. I don’t want to tar that movement with my association, for one thing. But I do have a great deal of sympathy for these movements and I continue to learn from my sometimes clumsy dance with the left.

When we formed Earth First! in 1980, we consciously tried to learn from the strategy and tactics of a number of left social movements. The Wobblies were certainly one group we were drawn to. I even published a Little Green songbook, taking after the Little Red songbook of the IWW. I’ve talked to Utah Phillips and some old Wobblies; I am really attracted to a lot of what they have to say…”

The ultimate moral appeal of Earth First! is that it urges us to safeguard the natural world from our ecologically destructive societies, that is, in some sense, from ourselves. But, I have to ask, who is this “us” from which the living world has to be protected? This, too, is an important question. Is it “humanity?” Is it the human “species” per se? Is it people, as such? Or is it our particular society, our particular civilization, with its hierarchical social relations which pit men against women, privileged whites against people of color, elites against masses, employers against workers, the First World against the Third World, and, ultimately, a cancerlike, “grow or die” industrial capitalist economic system against the natural world and other life-forms? Is this not the social root of the popular belief that nature is a mere object of social domination, valuable only as a “resource?”
– Murray Bookchin

You can also read about some of Dave Foreman’s more recent work at the Rewilding Institute which he co-founded.