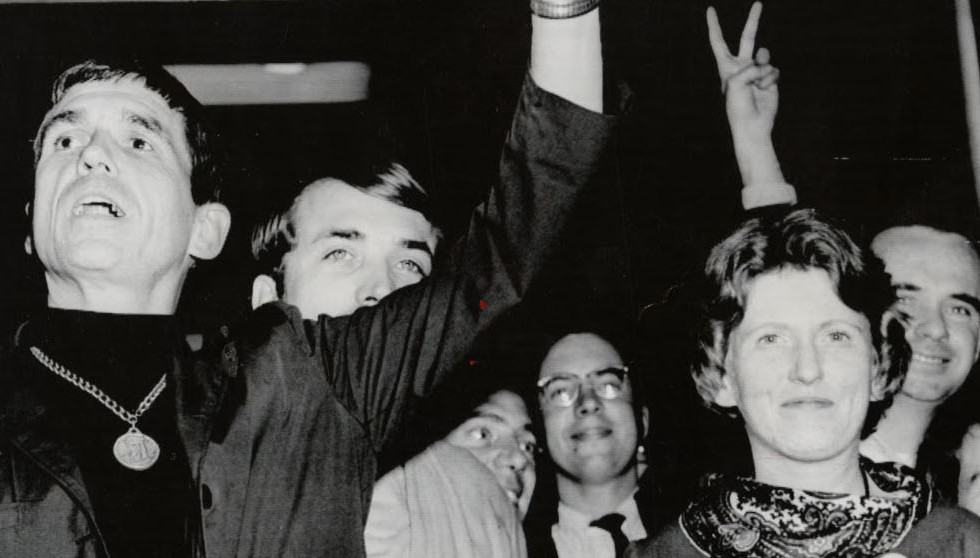 I was deeply saddened this Saturday when I learned of Daniel Berrigan’s death. During the troubled times of the US involvement in Southeast Asia, his actions inspired many from my generation to stand up to authority. He and others who broke laws to save lives gave me the courage when I was just out of high school to not accept what was for so many, a one way ticket to Vietnam.

There were many of us who worked as hard as possible here in the states to not only “Bring the Boys Home,” but also to educate people as much as possible about imperialism and hope that we could help prevent the needless slaughter of Vietnamese and others in Southeast Asia and the “agent-oranging” of their beautiful biodiverse jungle homeland.

I can only hope that others will follow in the steps of Berrigan’s bravery while opposing wars for oil, wars for other  “resources,” and wars (as usual) that promote death to provide profit for the very few. Today we are at a critical juncture in the Earth’s evolutionary process. All people need to do is open their eyes to what is happening and then have the courage to act upon their conscience. Daniel Berrigan, you will be missed but never forgotten.

Via Institute For Public Accuracy:

The New York Times reports: “The Rev. Daniel J. Berrigan, a Jesuit priest and poet whose defiant protests helped shape the tactics of opposition to the Vietnam War and landed him in prison, died on Saturday in the Bronx. He was 94. …

“The catalyzing episode occurred on May 17, 1968, six weeks after the murder of the Rev. Dr. Martin Luther King Jr. and the outbreak of new riots in dozens of cities. Nine Catholic activists, led by Daniel and Philip Berrigan, entered a Knights of Columbus building in Catonsville and went up to the second floor, where the local draft board had offices. In front of astonished clerks, they seized hundreds of draft records, carried them down to the parking lot and set them on fire with homemade napalm. …

“In the years to come, well into his 80s, Daniel Berrigan was arrested time and again, for greater or lesser offenses: in 1980, for taking part in the Plowshares raid on a General Electric missile plant in King of Prussia, Pa., where the Berrigan brothers and others rained hammer blows on missile warheads; in 2006, for blocking the entrance to the Intrepid naval museum in Manhattan. …” Memorial services for Berrigan are scheduled for Thursday and Friday.

Fr. JOHN DEAR, johndearsj@msn.com
Dear just wrote the piece “The Life and Death of Daniel Berrigan.” He was Berrigan’s literary executor, close friend, and editor of five books of his writings.

Sr. MEGAN RICE, [in D.C.], mrice12@gmail.com
Rice, a nun, is one of the Transform Now Plowshares, a group of three activists who were convicted of allegedly intending to harm national security by entering into a nuclear weapons plant in Oak Ridge, Tenn. in 2012. The activists — who poured blood and painted “The Fruit of Justice is Peace” — spent two years in prison before their sentences were finally overturned last year. Rice was featured on the recent IPA news release “‘Nuclear Security Summit’ — Hypocrisy, Profiteering, Spectacle.” She noted several commemorations of Berrigan, some highlighted here along with videos of Berrigan.

ELLEN GRADY, demottgrady6@gmail.com
Grady is part of the Ithaca New York Catholic Worker movement, which has been a key part of organizing against the U.S. government killer drone assassinations program outside Hancock Air Force Base in upstate New York.

She said today: “My parents were very close to Dan and Phil [his brother who died in 2002] from when I was growing up. I last saw Dan a year ago and was hoping to see him this weekend when — on my way to New York City — I heard the news. Much of what we are doing is completely inspired by the work Dan did and the clarity he helped bring to our faith — what it means to be a Catholic and a Christian: To stand with victims, with the oppressed.

“His brother Jerry was involved in our protests against the U.S. government’s program of drone killings. Before he died last year he said his main regret was not having resisted more and gotten arrested more. So, we had a protest this year with 30 ‘Jerrys’ — life sized cutouts of him — outside the base.” See news release: “Jerry Berrigan Memorial Blockade.”
Grady is the sister of Mary Anne Grady Flores, see IPA release “U.S. Air Wars Denounced by Recently Released Catholic Worker Grandmother.”
Comedian Larry Wilmore made reference this weekend to the administration’s drone assassination program at the White House Correspondents Dinner, comparing President Barack Obama to Golden State Warriors point guard Stephen Curry because they both “like raining down bombs on people from long distances.”

← 160+ Farm and Food Groups Ask Congress to Reject TPP, Stand Up for Independent Farmers and Ranchers
SIGN ON NOW: NO to Gold Mining in Colombia’s Yaigojé Apaporis National Park! →