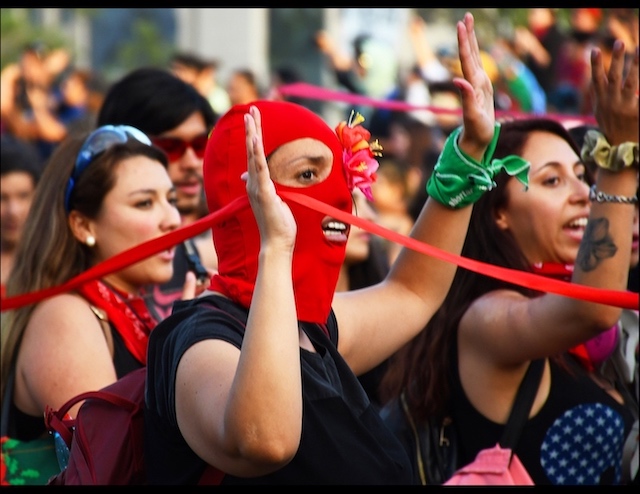 Photo: Hundreds of women march together into Plaza de la Dignidad in Santiago, Chile. Women have a lead role in the protests, including the Red Masks in Resistance movement, and created an anthem for women’s rights that has gone viral: ¡El Violador en Tu Camino! [The Rapist in Your Path]. photo: Orin Langelle/GJEP(2019)

Chile’s national police force, the Carabineros de Chile, have filed a legal suit against the feminist artistic collective Las Tesis for allegedly inciting violence against the police. In doing so, the Carabineros have lain bare the mechanisms by which the violence of Chile’s patriarchal rapist state is entrenched and institutionalized, conjuring an insidious through-line connecting the censorship and violence of the country’s civic-military dictatorship (1973-1990) to the struggles against police brutality in Chile—and much of the world—today.

The Carabineros’s suit is the juridical extension of the repressive police brutality that has met the massive social movement convulsing Chile since October of 2019. The movement, which coalesced as Chile Despertó (Chile Awoke), was initiated by secondary school students who, in response to a four percent metro-fare hike, coordinated a fare evasion campaign that quickly escalated into a wave of protests and civil disobedience. In response to this escalation, Chile’s president, Sebastián Piñera, declared a state of emergency on October 18th and subsequently issued a curfew in Santiago—government actions that had not been taken since the dictatorship of Augusto Pinochet (1973-1990). Trucks with water cannons and tear gas rolled through the streets, conjuring the chilling memories of the 1973 military coup. On October 20th, Piñera rescinded the fare hike.

But the protests did not stop. Though the civil unrest and mass demonstrations were incited by the fare increase, they were fueled by a deep and long-standing dissatisfaction with the profound inequalities fostered by Chilean neoliberalism: one of the chief failures of the country’s democratic transition. Though Piñera had intended the curfew to quell the uprising, it spurred it forward, prompting protests around the country and transforming the unrest in Santiago into a national movement. As the protests grew in size and multiplied around the country, activists have made sweeping demands including transformations of the education, healthcare, and pension systems, an increase in wages, gender parity in government, an end to sexual violence, the resignation of Piñera, and a new constitution to replace the hitherto intractable one imposed by the dictatorship in 1980.[1]