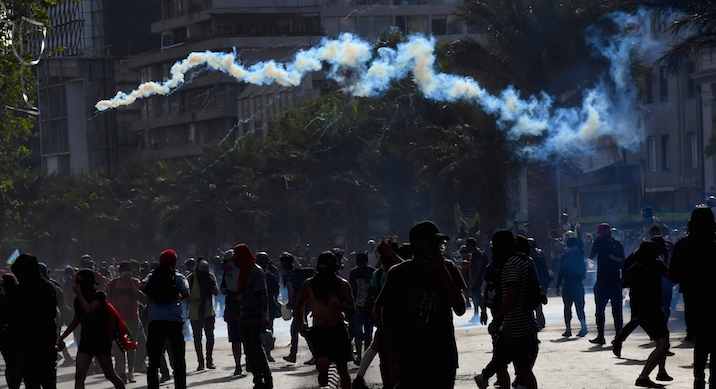 Note: Gary Hughes was part of a Biofuelwatch and Global Justice Ecology Project team that came down to Chile to document and understand the popular uprising here through a series of articles, photo essays and videos.  The full complement of these can be found at https://globaljusticeecology.org/category/news-and-analysis/

The austral spring of 2019 marked a historical watershed in the history of Latin America, with a series of popular mobilizations in several nations denouncing economic inequality and environmental injustice. Of particular intensity is the popular uprising in Chile that was used to justify the last-minute relocation of the United Nations climate summit, COP25, from Chile to Madrid, Spain.

In an effort to save face before the international climate elite, the Chilean government announced the accelerated closure of a number of outdated and dirty coal-burning power plants, reducing the anticipated retirement for two plants from within the next 10 years to within the next five years, and the closure of two other coal powered plants that had not been slated for closure until 2040. This announcement was welcomed, especially by the communities living on the fence lines of these facilities. Yet it did little to placate a mobilized populace experienced with the injustices of a predatory economic system based on extractivism that condemns many to living in highly polluted sacrifice zones.

Having been subjected to a neoliberal economic laboratory forced on their communities literally at gunpoint during a 17-year military dictatorship, followed by 30 years of further entrenchment of markets-based policy, grassroots Chilean social movements are well-versed in the brutal metrics of the markets. They consider market-based approaches to climate policy such as “cap and trade,” forests and nature marketed as offsets to polluters, and carbon credits for hydroelectric dam development to be illegitimate, unjust and ineffective for addressing climate change. Such a strong and articulate consensus rejection of neoliberalism is not the message that the UN is eager to elevate during the current exceptionally market-centric COP25 meetings.

for the full article, visit Truthout

← Video: CHILE PHOTO DIARIES – from the frontlines
DOUBLE YOUR IMPACT! Your matched gift will help us protect forests and human rights around the world →