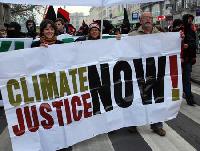 Climate Justice Now! demanded on the streets of Poznan, Poland where the UN Framework Convention on Climate Change is being held.  This demonstration was part of the Global Day of Action against climate change on Saturday 6 December, 2008.  Photo:  Langelle/GJEP-GFC

Poznan, Poland–Saturday 6 December 2008 marked the Global Day of Action against Climate Change.  Over 90 countries participated in actions internationally. In Poznan officials from around the world have gathered to hammer out a roadmap to a post-Kyoto climate agreement, which intends to be finalized next year in Copenhagen.  This agreement will determine global climate policy after the Kyoto agreement expires in 2012.

Also, this Day of Action comes on the road to the Copenhagen mobilization that is growing around a Call to Action made by social and environmental activists from over 21 countries earlier this year.

Here in Poznan, many Indigenous Peoples Organizations, NGOs and social movements are condemning what they feel is a mostly closed UN process where business interests have the most say in promoting false solutions that will be detrimental in trying to stop climate chaos through market based mechanisms.  Many here feel that those market based mechanisms have escalated the climate crisis.
—