The celebration during the night in the uprising.  Photo: Langelle/GJEP

From October 18, 2019, in Chile we move to everyday surrealism. We wake up and get up to dream in reality. To live a lucid dream * in a waking state, where every day we can modify reality with our actions. Where we are no longer afraid, because nothing can be worse than we had before the mass demonstrations for social justice in Chile began.

*A lucid dream is a dream that is characterized by the fact that the dreamer is aware that they are dreaming and manages to modify the events of the relatively at will.

Before the social explosion, the socio-environmental activism that I have been working on for twenty years did not seem to bear the necessary fruits and despair was taking hold of me. Waking up every day to a false normal, where apparently everything was fine. Where the complaints to the system were almost marginal. Where we were always the same and those who tried almost in vain to reveal the injustices, falsehoods and inconsistencies of a system designed to enrich the rich at the expense of the impoverishment of the poor, through abuse and subjugation of everything that was not white, male nor human. That reality mirage drove me crazy every day. But nothing was in vain, we were nourishing the substrate.

Today, although socio-environmental problems remain intact, the awakening of the people of Chile opens up certain possibilities of structural changes that make it possible to begin repairing the damage we have caused to the planet, our only home, our common home. The occurrence of the social insurgency in Chile in parallel with the preparation of the alternative citizen activities of COP 25 (such as the People’s Summit), was perhaps no coincidence. In fact, each one was enhanced by the other, and both are examples of a process of maturation of social movements in Chile, which has made us increasingly aware of the interrelated citizen demands and how all injustices have a common origin. Maybe that common origin has different names.

The idea that “I think, then I exist” is a very precise tool of domination. At the same time that this statement was accepted, it was accepted that the only people who think are white men. Men of other races, women of all races, and of course every non-human living being, does not think, and therefore does not exist, is not worthy of rights and must be dominated by those who do think: European men.

With that motto from Europe, the world was advanced by stripping all women and all the original peoples of the world, imposing the European way of life as the only valid one, as the desirable way of life for all humanity, disregarding the forms of indigenous life and its direct coexistence with nature as living beings part of the biodiversity of ecosystems, what we really are (or should be again). The same idea today is imposed with a new name: development. We all want to be developed, live with the comfort standards of Europe, belong to the OECD, accepting our subordinate position of “third world country” or “underdeveloped”, or “developing”, without questioning who invented the concept and why they automatically put us in subordination of those who colonized us.

Development is truly a dream, but not a lucid one. It is a dream in which we cannot modify anything that happens in it. Where we only see the events happening vertiginously with constant aberrations in between that happen so fast they hardly give us time to react without realizing that it is a false reality, a mirage that disappears immediately.

Development is only possible through dispossession and enslavement. This is how Europe achieved the levels of wealth that it holds today. Perhaps today Europe’s environmental standards are strict, perhaps they have abolished slavery within their borders, perhaps it is the place in the world where civil and social rights are most guaranteed. The material comfort of Europe continues to be maintained thanks to the exploitation of its former colonies, now supposedly independent territories, but rather are subordinated through the bribery of states and Creole entrepreneurs who continue to serve the world order imposed from hundreds of years ago. Companies in developed countries do not care that their workers do not have labor rights in the countries where they operate,

This imbalance of power and wealth and its environmental impacts at local and global levels is blamed on the common citizenship, as if it were responsible for the (almost irreparable) damages to the planet. Recycle and bathe in 5 minutes to atone for your faults, but don’t stop buying and buying. Work for your boss until your last breath so that we will one day be a developed country. But development for all is impossible, as well as mitigating climate change through capitalist solutions.

The sample button is lithium. Solar energy has been proposed as the panacea to solve the climate crisis and end energy production based on fossil sources emitting greenhouse gases. To store the energy produced from solar sources, batteries that require lithium are required for its manufacture. Urra, Chile has the largest lithium deposits in the world! But who controls them? Soquimich (SQM), a company that was from the State, but today belongs to Ponce Lerou, son-in-law of the dead dictator Pinochet. The other lithium operating company in Chile is Albemarle, a US transnational that last year had profits of more than 3 billion dollars.

And if we nationalize lithium? Could we solve climate change and social injustices in Chile at the same time? That is the mirage. Lithium deposits in the world total 16 million tons. To convert the global automotive fleet to electricity, 24 million tons of lithium are required by 2020. With all the lithium in the world, it is not enough for us. Electromobility is a mirage. But a deeper question is: is it fair that we destroy an ecosystem as unique and delicate as the atacama salar, where flamingos and parinas live, to approach the illusion of solving climate change without getting rid of capitalism? Today the Atacameños Peoples teach us that it is clearly not fair. That destroy the territories of some peoples to maintain the living conditions of others, It is at this point clearly unacceptable. Today dozens of people from Atacameños Villages block the access of SQM and Albemarle to the Salar de Atacama. The main reason for the blockade: support for the mobilizations of the Chilean people. What lucidity of the Atacameño peoples, and what lesson they teach us.

It is time for humanity to regain the ability to relate to the planet as a species within planetary biodiversity. It is time to look at the original peoples and their cultures and rescue what they can teach us to recover that relationship. It is time to reposition developed countries as they really are: the cause of global environmental catastrophes, and give the opportunity to the peoples of those countries to also recover their humanity as a component of the biodiversity of their territories. We must reduce the consumption of industrial and domestic energy, we must recover the forests, we must return the land and common goods at the hands of the people for their use in solving real needs. These are the true solutions to climate change and social injustices.

As long as we maintain the lucidity of this dream, there will be possibilities to achieve it. 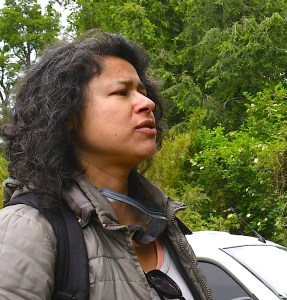 Alejandra was part of our GJEP-Biofuelwatch Team in Chile and stood with us at the Mapuche Land Occupation. She also joined us in the street mobilizations in Temuco and Santiago.  GJEP first met Alejandra in 2004 when we came to Chile to meet with the Mapuche group KONAPEWMAN about the problem of genetically engineered trees.
You can listen to interviews with Alejandra that we recorded on this trip by going to:
KPFK Interviews Alejandra Parra on Chile Protests & Global Environmental Justice
Reports on Resistance in Chile on KPFK