Nurses and health cares workers are among the most mobilized sectors during the Chilean Spring. Here nurses have a sidewalk post where they are prepared to care for injured protestors. Photo: Hughes

The plans to form a Biofuelwatch and Global Justice Ecology Project delegation to travel to Chile to participate in activities around the United Nations annual climate meetings (COP25) were already in the works when a dispute over a subway rate fare increase ignited a national rebellion against a predatory economic system and police violence.

When the United Nations and Spain decided to attempt to come to the rescue of the Piñera government and the global climate elite by moving the COP25 from Santiago to Madrid it did not take long for our delegation team to decide that we needed to stick with our original plans to be in Chile at this time.

Upon arrival to Santiago it is impossible to not see how the city has been turned upside down by this new political conflagration. This is not an easy time. Yet it is also easy to absorb the excitement that is in the air. The fraternal energy on the streets in the heat and intensity of this protest movement is a marvel. The unity of the street culture in opposition to the government of Sebastian Piñera is seen not only in the tens and hundreds of thousands of people that continue to protest, but in the way people have come together to support the broad mobilization. Case in point, the extensive efforts of volunteers to provide first aid to protestors who are being injured during the actions. 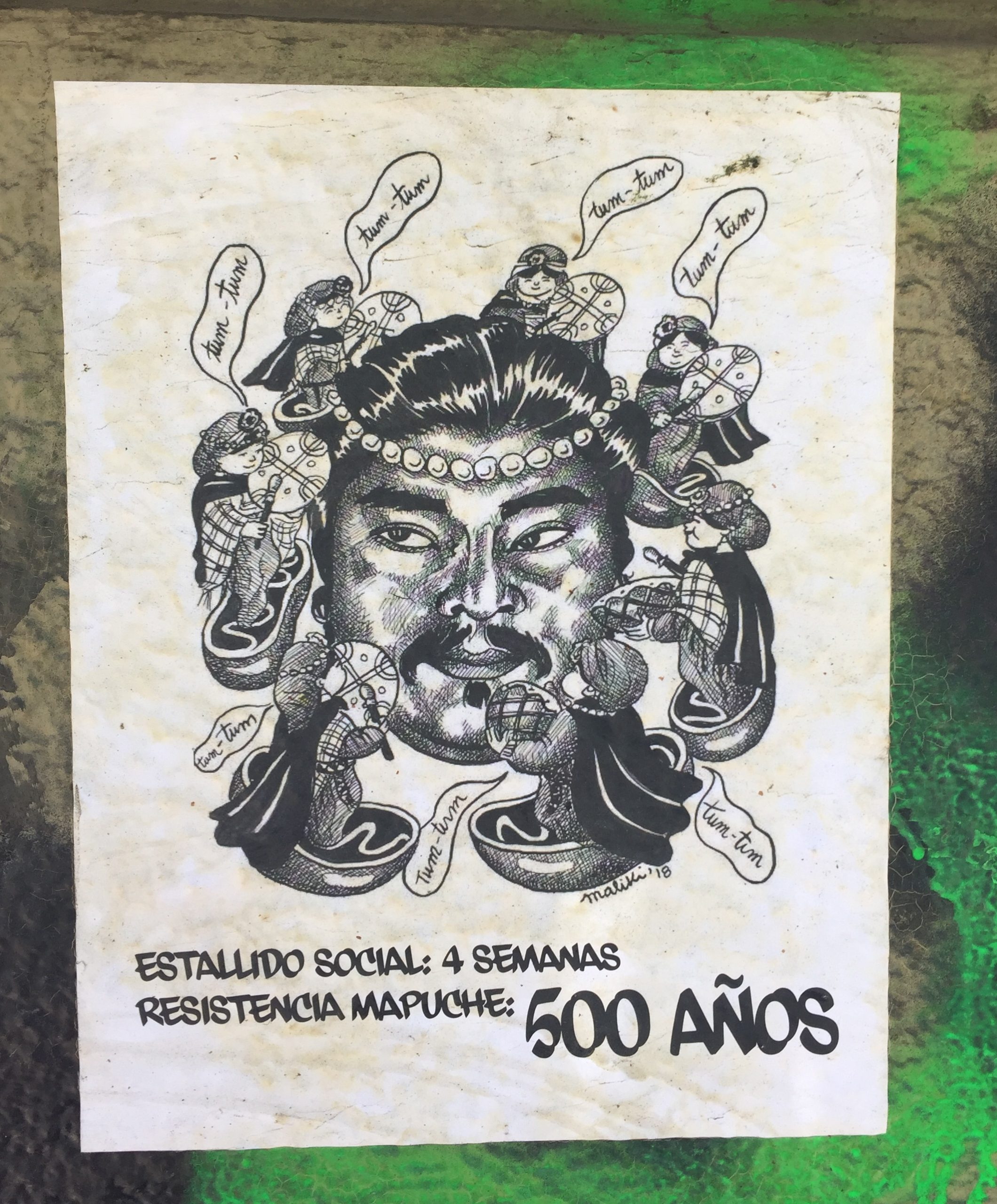 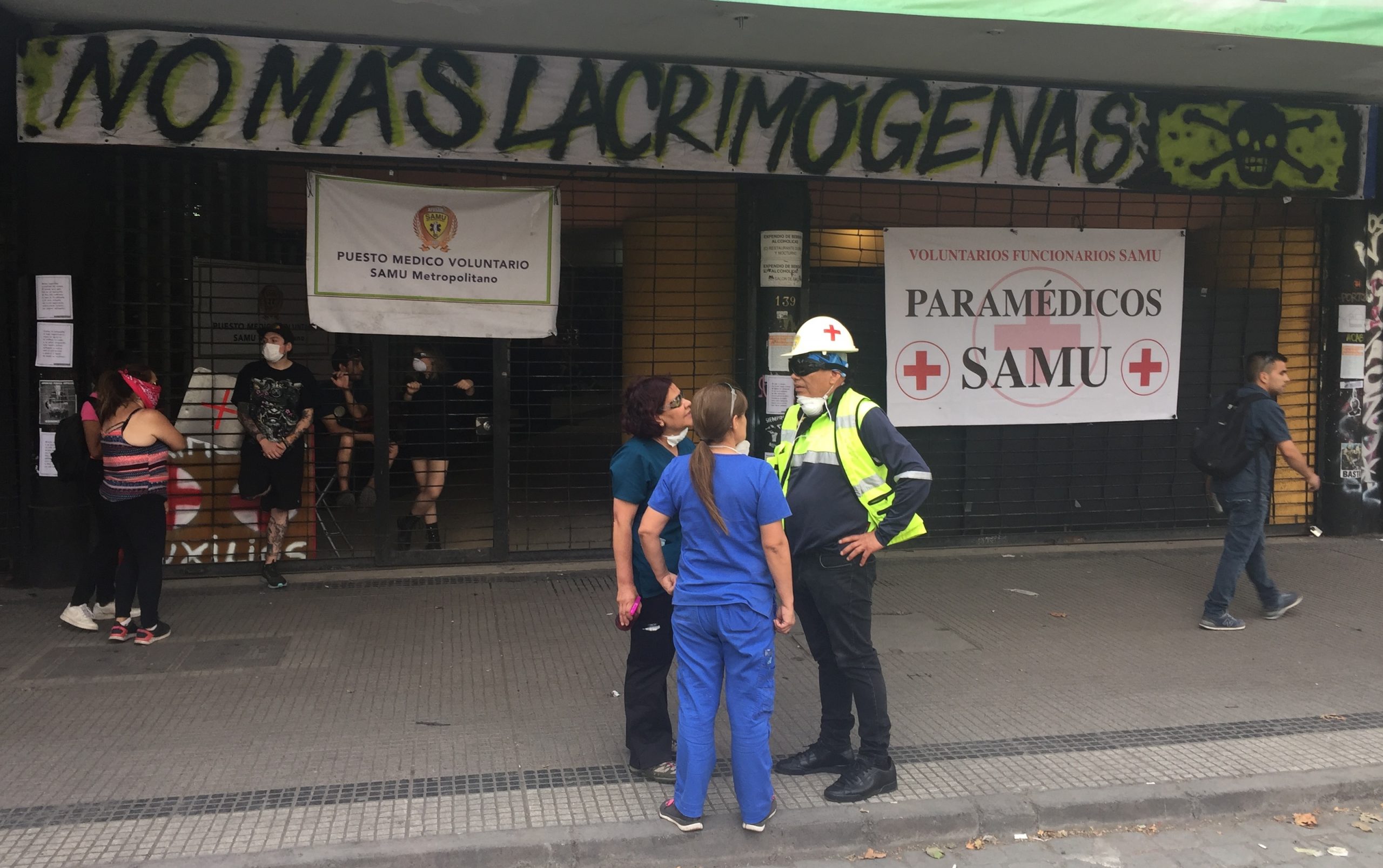 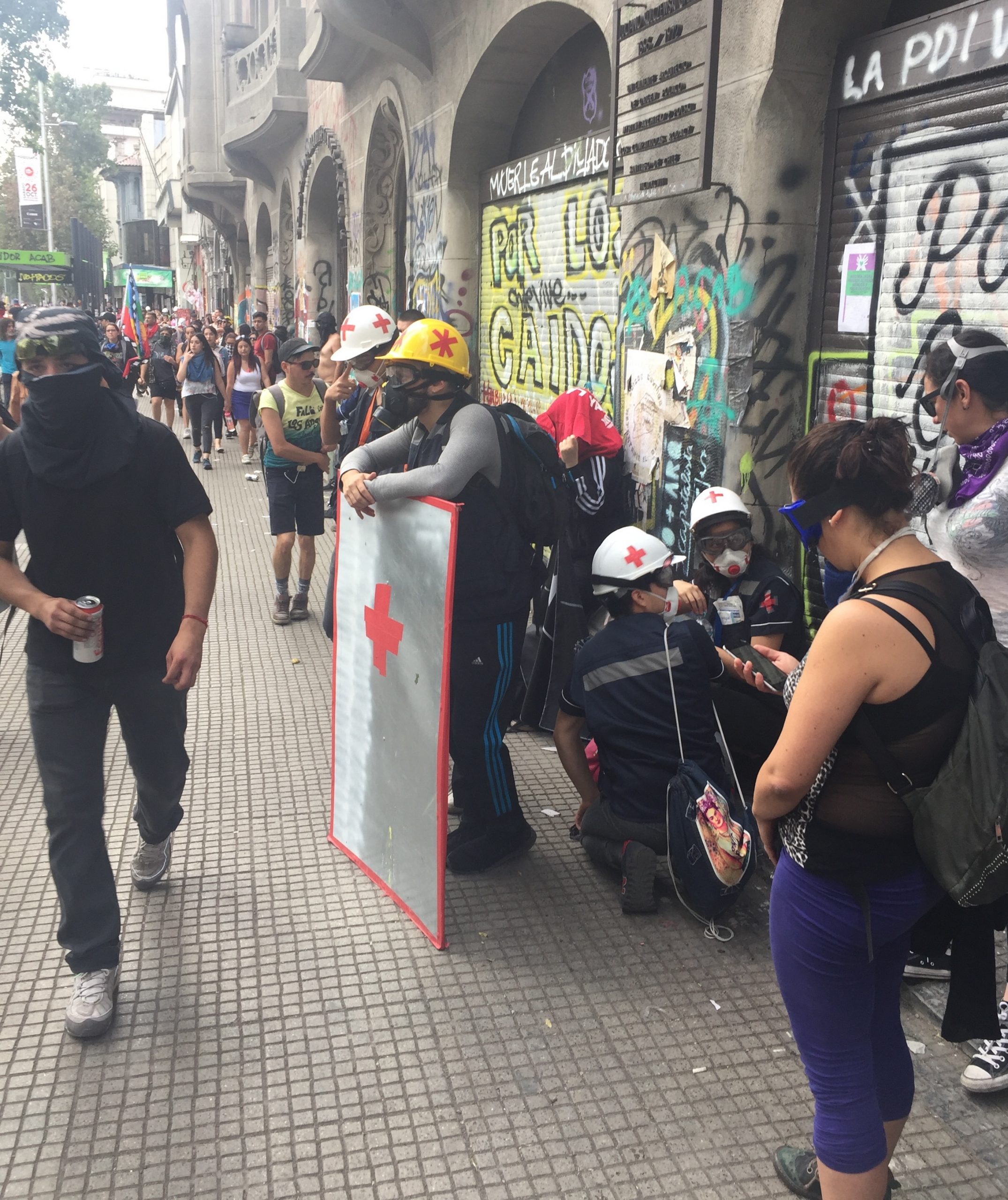 Another team of first responders. These rescue teams are greeted with cheers and are protected from police attacks when moving through the crowd to attend to injured people. Photo: Hughes 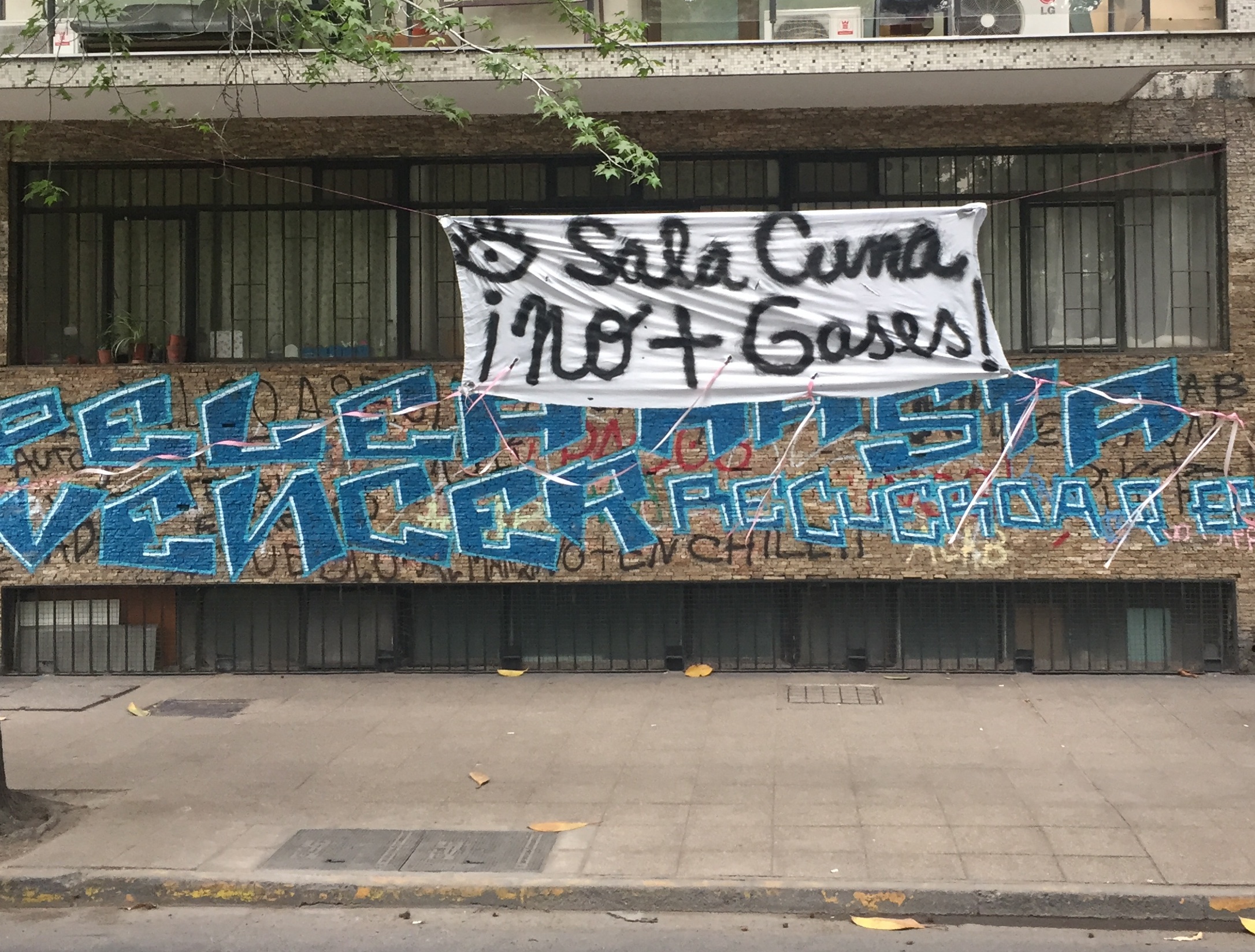 This banner reads “Sala Cuna” (child care for infants) No More Gases. Daily life for Santiago residents has been made very difficult, even for those who support the protests. A near daily exposure to tear gas is one of the dangers that has steadily unified opposition to the Piñera government and the Carabineros police. Photo: Hughes 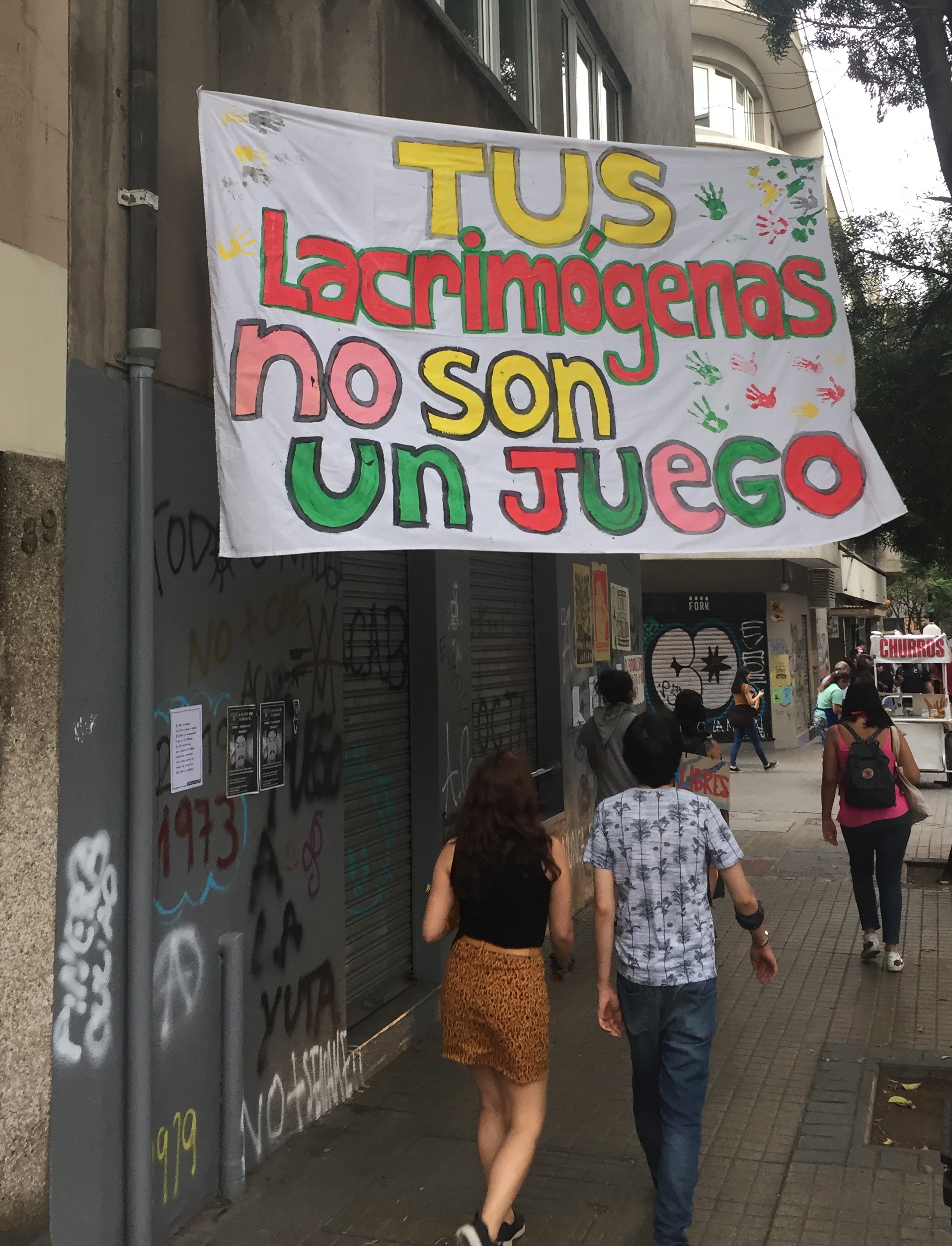 Another child care provider hangs a banner outside their locale: “Your Tear Gas Is Not A Game.” Photo: Hughes 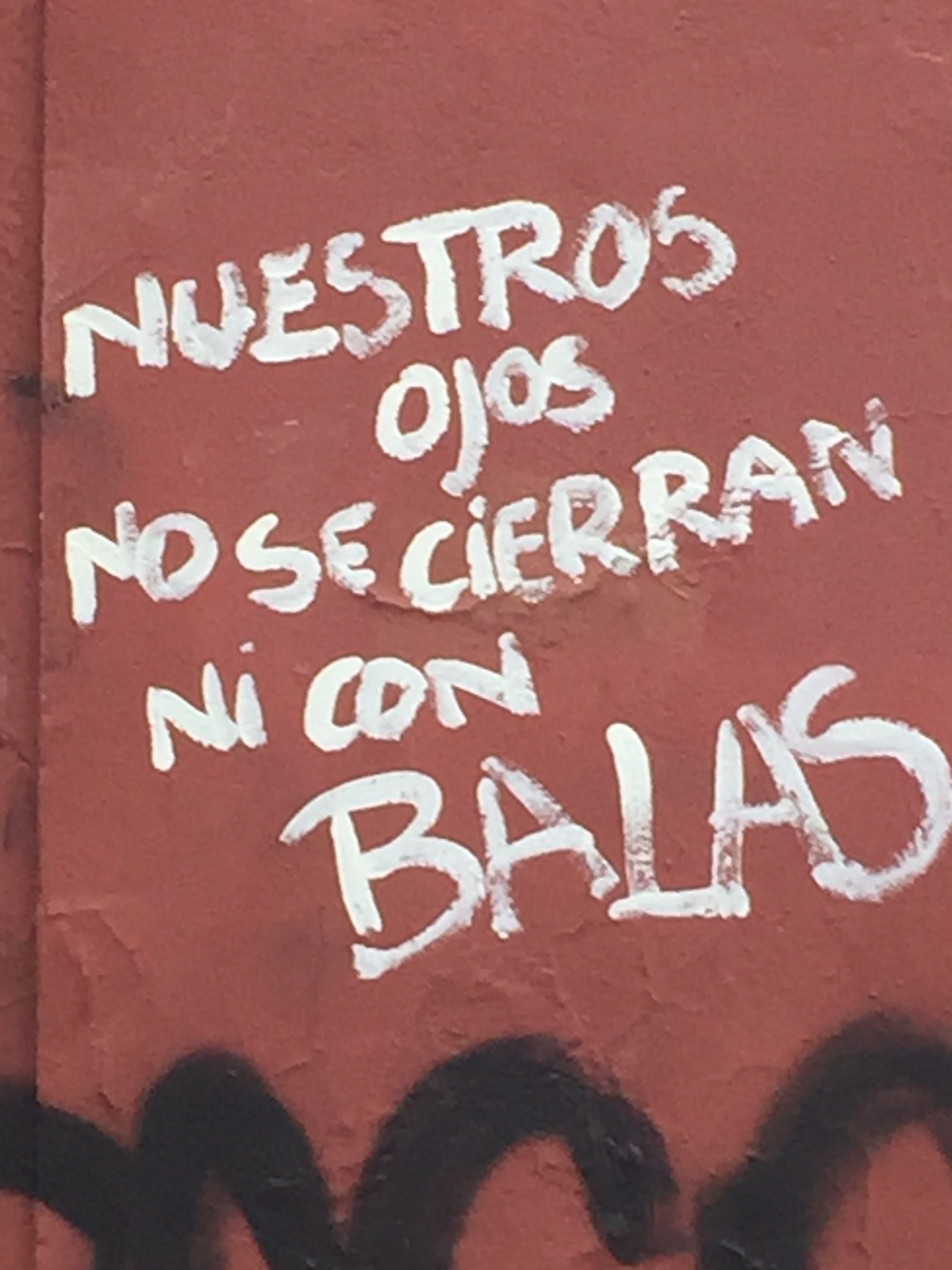 In reference to the more than 270 people have suffered serious eye injuries after being shot by Carabineros with different “anti-disturbance” weaponry the graffiti reads “Not even bullets will close our eyes.” Photo: Hughes